Amid Lebanon’s ongoing protests, army finds itself caught in the middle

The Lebanese Armed Forces have clashed in several areas in Lebanon with protesters who have been blocking roads and highways. 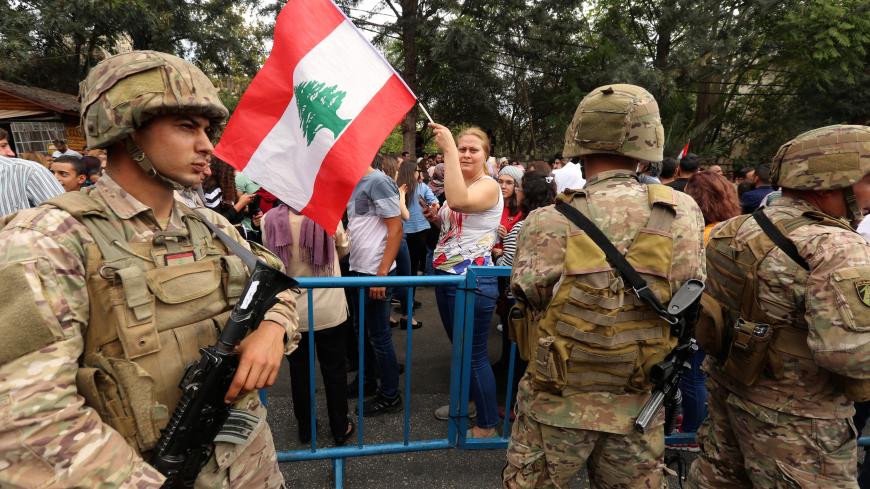 A demonstrator holds a Lebanese flag during an anti-government protest in the southern city of Nabatyeh, Lebanon Oct. 24, 2019. - REUTERS/Aziz Taher

Over the course of the weeklong demonstrations in Lebanon that started on Oct. 17, demonstrators have spurred the Cabinet to pass critical reforms, and are continuing to demand the total resignation of all politicians in the Lebanese government, chanting, “All means all.” Some more concrete requests have been voiced, including anti-corruption laws and lifting the secrecy of bank accounts.

Throughout these protests, the role of the Lebanese Armed Forces (LAF) has been a multi-faceted one. Although Lebanese Prime Minister Saad Hariri has called on the army’s leadership to protect demonstrators’ right to protest, he and other leaders including President Michel Aoun on Oct. 24 and Hezbollah Secretary-General Hassan Nasrallah on Oct. 25 have stressed the need to open roads that continued to be blocked by protesters on Oct. 26. Efforts to open roads by the army have been marred by reported violence in several areas in Lebanon throughout the week, and on Oct. 26, shots were fired into the air by the Lebanese army as it tried to open the road to traffic in Beddawi near the northern city of Tripoli.

The army, which is one of the few institutions in Lebanon that still enjoys broad public support, has also played a key role in shielding protest gatherings from violence at the hands of Hezbollah supporters and their allies in the Amal bloc, both in Beirut on Oct. 21 and in south Lebanon on Oct. 23. The military was also successful in calming the tense situation between claimed Lebanese Forces members and protesters.

Supporters of the Lebanese Forces had allegedly been arriving to join demonstrators in Jal el-Dib as protests have taken place there, but former Lebanese Forces Labor Minister Camille Abousleiman denied allegations that the party’s supporters were stirring up trouble.

“There’s absolutely strict instructions that this is not our protest [was not initiated by LF], but of course we are participating,” Abousleiman told Al-Monitor. “We’re going out of our way to not raise any divisive slogans.”

Some protesters have contested this version of events, however. Although the uprising is still gaining momentum and a human chain from Tripoli all the way to the south is planned for Oct. 27, there are growing worries among protesters about political parties riding the uprising’s wave for their own benefit.

The army has garnered sympathy from protesters for soldiers’ displays of solidarity with them and continues to enjoy the backing of parties in the government, according to both politicians and members of movements on the ground. Yet it has faced challenges as it works to carry out orders from the top while also respecting the rights of protesters.

After the LAF reportedly aimed weapons at journalists and protesters as riot police fired tear gas and rubber bullets at demonstrators in Riad al-Solh Square in central Beirut on Oct. 18, Human Rights Watch accused the security forces of excessive force. On Oct. 26, according to a statement by the army, soldiers reportedly fired tear gas and rubber bullets into the air after they were attacked with stones while trying to clear a road in Beddawi. The incident reportedly left five soldiers injured, and a source in Tripoli’s government sent Al-Monitor the names of seven protesters who were reportedly admitted to a local hospital. According to the Hariri press office, the prime minister requested from Gen. Aoun to open an investigation into the matter.

Following Hariri’s order to the army’s commander, Gen. Joseph Aoun, to protect protesters on Oct. 21, however, the army deployed several dozen troops and armored vehicles to downtown Beirut once again, this time in order to stop a large group of men on motorbikes bearing Amal bloc and Hezbollah flags from entering the protest area.

Although many demonstrators were scared into leaving the protest area, Al-Monitor witnessed many of those who remained in downtown that night chanting pro-army slogans as soldiers looked on from behind barbed wire in Riad al-Solh Square.

Hezbollah and Amal reportedly issued statements denying connections to the biker gang, but on Oct. 23, the army stopped similar threats of violence against protesters from supporters of Amal and Hezbollah in the southern city of Nabatiyeh, a stronghold for the two parties. Officials from Hezbollah’s media department and from the Amal bloc could not be reached for comment, while the LAF’s Directorate of Orientation refused to answer questions about the military’s operations during the protests.

Support for the army continued to grow as apparent statements of support from anonymous soldiers spread on social media. In Jal el-Dib, a suburb of Beirut, soldiers were filmed with tears in their eyes on Oct. 23, as they carried out orders to clear protesters blocking the coastal highway that runs through the area, injuring demonstrators.

By the afternoon of Oct. 23, however, it appeared that tensions in Jal el-Dib had dissipated. After a tense morning, protesters were seen offering snacks to soldiers, chatting with them and pinning roses to their uniforms and rifles.

Patrick Abu Kassem, a protester in Jal el-Dib who said he had been at demonstrations throughout the Beirut area for all six previous days of protests, told Al-Monitor that the army had stopped trying to open the highway after seeing the number of people present, and praised the army’s actions.

As protests grew tenser throughout the week, demonstrators began to organize under a loosely structured coordinating body; challenges arose for both the army and security forces seeking to protect the demonstrations. Shortly before Nasrallah’s address to the Lebanese people on Oct. 25, Hezbollah supporters in Riad al-Solh Square clashed with some of the protesters, leaving several injured. Rather than the army getting involved in this instance, however, riot police from the Internal Security Forces separated pro- and anti-Hezbollah demonstrators instead. Previously, on Oct. 19, Minister of the Interior Raya al-Hassan, whose ministry overseas the operation of the Internal Security Forces, reportedly refused to take security measures to disperse demonstrations and open roads by force.

Later in the day, the army reportedly faced difficulties calming tensions in a town in the Bekaa Valley, where similar clashes took place in the wake of Nasrallah’s speech.

Tariq Serhan, an activist who has taken part in protest movements since the 2015 trash demonstrations and has been on the ground throughout the latest protests, said that while he respects the army, he has no trust in any of the existing government institutions.

“Of course, they are our brothers, they’re our families,” he told Al-Monitor. “But there’s always this political pressure, so once the political decision is taken, you will see the army beating people in the street.”

Retired Gen. Sami Rammah, one of the leading figures in the revolutionary coordinating body that has been established by several protest groups in Beirut, told Al-Monitor that soldiers resorting to the use of force were only following orders. In response to the incident in Beddawi, retired Gen. Andre Bou Maasher, who is involved in the media wing of the body, told Al-Monitor that he condemns all violence but continues to have confidence in the military.

Although the head of the Progressive Socialist Party, Walid Jumblatt, tweeted on Oct. 23 that he opposed cracking down on any peaceful demonstration, politicians from some of the most powerful parties voiced their support for the army and the reopening of roads.

“The army is under pressure, definitely,” parliamentarian Alain Aoun, who is a member of the Free Patriotic Movement, the single largest party in parliament, told Al-Monitor. “It has to find a balance between opening the roads by force, let’s say, and at the same time not hurting the protesters.”

Member of parliament Rola Tabsh Jaroudi, a member of the Future Movement who represents Beirut in parliament, said she was against the use of force by the Lebanese army. Nevertheless, she stated that the army has had to make difficult calculations in places like Jal el-Dib.

Samir Geagea, head of the Lebanese Forces party which resigned from the Cabinet on Oct. 19, voiced his full support for the LAF on Oct. 23, and denounced anyone implicating the army in violence.

Yet following a week of rising hostilities between protesters, politicians, and Hezbollah and its allies, the military has faced mounting challenges to carry out its mission. If the sporadic violence that has erupted between various groups in the latter part of the week is any indication, the future security of the demonstrations remains uncertain, especially as protesters hold fast to their original demands amid mounting political pressure. In such an increasingly volatile environment, the army’s ability to keep a lid on tensions will likely only be tested further.