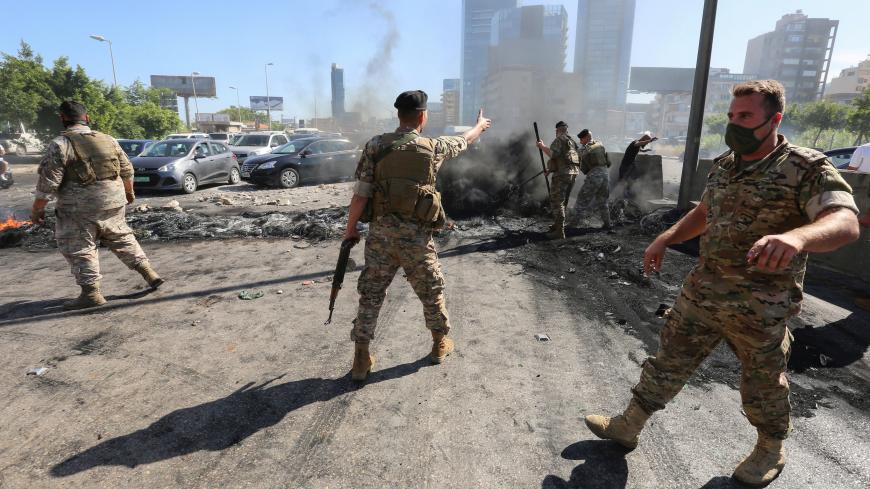 Lebanese army soldiers open a road that was blocked by demonstrators during a protest sparked by a rapid fall in the Lebanese pound and mounting economic hardship, along a highway in Antelias, Lebanon, June 12, 2020. - REUTERS/Aziz Taher

In scenes that echoed the spontaneous start of Lebanon’s protests on Oct. 17, thousands of Lebanese from all walks of life and sects poured into the streets of Beirut and nearly every other major city in Lebanon the night of June 11. They set fire to banks, blocked roads and voiced deep frustrations with the political establishment backing Prime Minister Hassan Diab’s government over the Lebanese pound’s reported drop of around 25% in value on the parallel market against the dollar in the previous two days.

On June 12, Diab held an emergency Cabinet session during which temporary solutions to limit the economic crisis were agreed upon.

“It’s not about only the dollar issue,” business owner and protester Abed el-Hejazi told Al-Monitor. “It’s that you are facing daily problems like securing your family food, education. Everything is corrupted.”

In addition to concerns about inflation and its effects on prices and salaries, Lebanese demonstrators have taken to the streets for months due to rising unemployment, debt, informal capital controls, bleak economic opportunities that have been exacerbated by the government-mandated coronavirus lockdown and frustration with the country’s corrupt, sectarian system of government.

The night of June 11 began with citizens setting up roadblocks all across Lebanon, including in the northern city of Tripoli, Sidon, the Bekaa Valley, and right in the center of Beirut in Martyrs’ Square. Bonfires soon burst to life in the square, while demonstrators occupied various areas around Beirut, including the street in front of the Central Bank, the coastal highway north of the city, and the strategic “ring road” where protest actions have taken place since October.

As in previous recent demonstrations, protesters smashed local bank fronts in Hamra in west Beirut as well as in the southern city of Nabatieh. Protestors succeeded in burning one bank branch in downtown Beirut, and also set fire to the Central Bank in Tripoli, where security forces were reported to have shot rubber bullets at demonstrators. Protesters were reported to have thrown rocks at security forces in Beirut in Riad al-Solh Square, where Internal Security Forces and the Lebanese Armed Forces eventually used tear gas to clear the area of crowds. Demonstrators on bikes remained on the outskirts of downtown into June 12, however, facing off with security forces long into the night. In Tripoli, 41 people were injured in the demonstrations, according to the Lebanese Red Cross.

Displays of solidarity between demonstrators were prevalent throughout the evening — in one video, a young man kissed an elderly woman who was sitting next to a burning pile of wreckage in tears. Although a June 6 protest had devolved into partisan and sectarian strife, on June 11, the divisions appeared to have been set aside as demonstrators chanted against sectarianism and marched together from majority-Shiite areas in Beirut’s southern suburbs to downtown. Similar convoys and chants were seen moving through Ain el-Remmaneh, where clashes had taken place June 6.

“Everyone is united, the story of sectarianism has been abolished,” protester Walid Sharafeddine told Al-Monitor on June 11 in Beirut. “It’s not like this one is from Khandaq [el-Ghamiq], or this one from Ain el-Remmaneh or this or that.”

In addition to marchers from the city’s southern suburbs, demonstrators also arrived on motorbikes from the majority-Shiite neighborhood of Khandaq el-Ghamiq, where supporters of Hezbollah and their allies the Amal Movement had previously come from to clash with demonstrators. This time, though, they joined the protests taking place at the “ring road.”

At one point during the demonstrations, a protester in Beirut told Lebanese TV station Al-Jadeed that everyone — including Hezbollah supporters who had not been involved in the demonstrations at the request of the group’s secretary-general, Hassan Nasrallah — should come to the protests.

“No one will touch your [weapons],” the man said, speaking to Nasrallah, “Come out, your people are starving.”

Although he was glad a cross-sectarian atmosphere had returned to the demonstrations, Hejazi said he was suspicious about potential political motivations for the all-inclusive protest.

“The same people who were fighting the people, today they are with the people. From my side, this is something political,” he told Al-Monitor. “These are related to parties. I don’t think these people can go to the ground without an OK” from their political leaders.

Despite Lebanese leaders' efforts to contain the currency crisis, protests and roadblocks continued on June 12, and clashes between rock-throwing demonstrators and security forces armed with tear gas again consumed the area around Martyrs' Square in Beirut.​

Lebanon’s Central Bank Governor Riad Salameh pushed back on reports that the pound’s exchange rate had hit 7,000 pounds to the dollar, as some protesters claimed June 11, yet exchange shops were reportedly selling US dollars for around 5,000 pounds — up from the official exchange rate of around 1,500 to the dollar or the agreed upon benchmark of around 4,000 pounds.

The parallel market rate was reported on June 12 by Agence France-Presse and The Asssociated Press to have even reached 6,000 to the dollar.

Following Diab’s emergency session June 12, the Central Bank said it would provide dollars to licensed exchange dealers, who subsequently committed to selling dollars at a rate of 3,940 pounds. Finance Minister Ghazi Wazni said the pound was already strengthening on the parallel market as a result of the Central Bank's actions. Parliament Speaker Nabi Berri, who also is head of the Amal Movement, said steps were being taken to bring the exchange rate to 3,200 pounds to the dollar.

“In my view this won’t lead anywhere,” said Sami Nader, the director of the Levant Institute for Strategic Affairs. He told Al-Monitor, “The fundamentals are still the same" and said "the dollar will continue to rise” unless the government takes drastic measures to contain the budget and balance of payments deficits, undertakes structural reforms and injects liquidity in the system.

The currency crisis and the June 11 protests present the most significant challenge yet to Diab’s nearly 5-month-old government, and its survival depends on its willingness to take steps that will appease the street while also keeping its political backers satisfied. Given that the economic and financial situation will likely only get worse before it gets better, getting out of the economic-political impasse will surely not come easily.