Hundreds of Lebanese took to the streets to protest deteriorating economic conditions and the high cost of living, which prompted the Central Bank to issue a new measure aimed at easing the currency crisis. 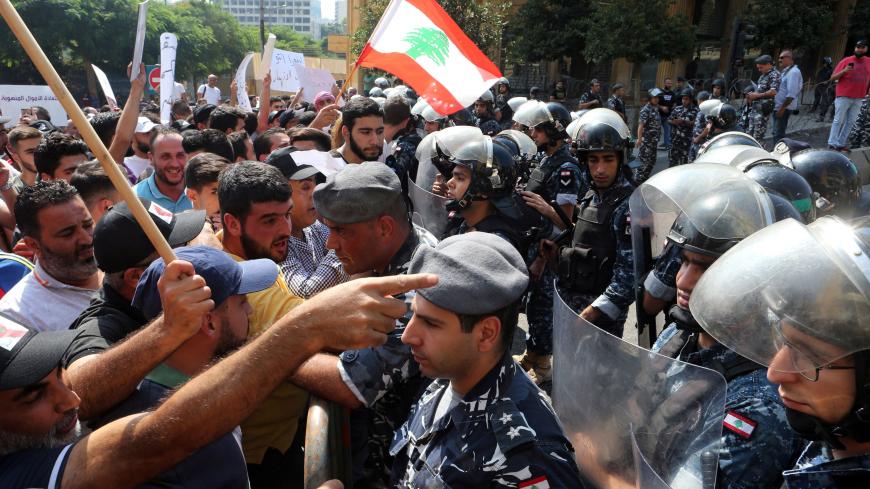 “The situation is tragic,” Ahmad Halabi, a protester in Beirut, told Al-Monitor Sept. 29. “The dollar is limited, gasoline is cut-off for us, there’s no water at home, there’s no food,” said Halabi.

Earlier that day, several hundred Beirutis had taken to the streets of Lebanon’s capital city, and many of them, like Halabi, had been motivated to take action by the shortage of dollars in the country’s banking system, threats of a backslide in the value of the Lebanese pound, and nationwide gas station strikes that took place in response. Although these issues were the immediate triggers of the protests — which at times turned violent — demonstrators demanded change to deeper, more systemic issues like Lebanon’s broadening economic crisis, the corruption of the political elite, and even the country’s sectarian system of government.

On Oct. 1, two days after the protests, the Central Bank of Lebanon unveiled a mechanism that will give importers of gasoline, wheat and pharmaceuticals access to dollars in order to be able to buy their imports. Lebanese streets have remained calm since. But, although the measure is a move in the right direction according to Lebanese leaders, analysts say it is a short-term solution that does not rule out further protests or public anger.

The protests began in Martyr’s Square in central Beirut. Demonstrators proceeded to march through downtown Beirut, where they reportedly clashed with police in attempts to break through security barriers set up around Nejmeh Square, the location of the Lebanese parliament, and in front of Prime Minister Saad Hariri's headquarters.

Later in the day, protesters blocked several major roads and highways throughout the city, burned tires and set dumpsters on fire. At times they threw rocks and water bottles at police, as related protests erupted in other major cities in the country. As the day wore on, security forces began using tear gas and were accused of police brutality. In a video circulated on social media, officers are seen beating a man lying on the ground. Al-Monitor witnessed a man who had already been apprehended being struck by a member of the security forces. On Oct. 2, the Euro-Mediterranean Human Rights Monitor published a report in which it accused security forces of human rights abuses during the day’s events.

In addition to grievances about the dollar crisis, protesters took aim at Lebanon’s leaders, resurrecting slogans calling for “the downfall of the regime” that were made famous during the Arab Spring in 2011.

Other rallying cries, though, were much more specific to Lebanon itself.

“No sectarianism, no waste, no corruption,” said one woman, outlining her demands while speaking with Al-Monitor. Lebanon has been governed by a sect-based political system that has stood unchanged since the end of the Lebanese civil war in 1991.

Demonstrators also directed their anger at new taxes and the high cost of health care, according to The National, in addition to the lack of opportunities in the country.

“There is no hope, there is no future,” protester Abbas Abed told Al-Monitor.

“We are 4 million — we cannot have 100,000 [people] ruling the country while 3,900,000 are downtrodden,” activist Rabih al-Zein told Al-Monitor. Zein had previously led economic justice movements in Tripoli, where anti-government protests also took place Sept. 29. “But we’re not talking about parties; whoever had a party flag left it at home and came [to protest]. Christians, Sunnis, Shiites, Alawites and Druze — all of them came under the Lebanese flag.”

Although the demonstrators included several hundred Lebanese from across many sects and classes, not everyone was satisfied with their methods. One passerby who spoke with Al-Monitor on condition of anonymity said while he empathized with the protesters’ causes, he wished they would pursue their goals differently.

Minister of Interior Raya al-Hassan, whose ministry is responsible for Lebanon’s Internal Security Forces, tweeted her own criticisms of the demonstrations.

“I am certainly with the freedom of demonstration and expression, but I don’t understand the pictures of burning, smashing and insults that distort any popular movement,” she wrote, adding that she supported the security forces efforts but “will not accept any security member attacking any citizen.”

Pledges from protesters to continue demonstrating on Sept. 30 apparently did not gather steam, as Beirut and other Lebanese cities remained calm throughout the first part of the week. The Central Bank’s announcement eased pressure on key goods like gasoline, and the bank’s governor, Riad Salameh, predicted the measures would decrease demand for the dollar.

“[The Central Bank Measure is] done in the right direction and is in line with the government orientation to let the main products to enter the country,” Minister of Economy and Trade Mansour Bteich told Al-Monitor. He added, “We don’t feel there is really a problem in this respect.”

But Lebanese analyst Dan Azzi, an advanced leadership fellow at Harvard, was skeptical.

“Is it plausible that one and a half pages solve the whole problem?” Azzi said to Al-Monitor, referring to the Central Bank mechanism.

He said while the announcement was not necessarily a bad move, it established a two-tier market for the pound — one for essentials that abides by the official exchange rate that is pegged to the dollar, and the other for relative luxuries that represents the real value of the currency.

Sami Nader, director of the Levant Institute for Strategic Affairs, said the protests had been expected, and the Central Bank announcement will not stop them from resurfacing again.

“People are fearing for their purchasing power, so I expect that this will expand. And it won’t stop here because the fundamentals are not improving,” he told Al-Monitor.

One of the driving concerns for Halabi and other protesters was the risk that basic goods beyond gasoline will start becoming prohibitively expensive. Nader said the devaluation of the Lebanese pound is likely to continue, making it harder for people to pay for necessities.

But whatever short-term measures the government and banking system devise, Lebanon’s high debt-to-gross domestic product ratio, its budget deficit and standstill economic growth will continue to hinder social and economic progress until decisive and transformative measures are taken, according to Azzi.

“The trick really is for any types of steps to affect everybody from top to bottom,” he said, adding, “The problem is, the protesters, what they’re seeing is [that] only the middle class or the poor are being hit. They haven’t seen the big whales being hit yet.”

Bteich said he preferred to talk about improving the management of public assets and boosting investment rather than talking about austerity. But organizations like the International Monetary Fund have expressed concerns about Lebanon’s ability to take bold and unpopular actions to save the economy, and if they’re correct, it is almost inevitable that the kinds of protests that took place on Sept. 29 will continue to threaten the government’s stability.