What impact will Lebanon’s looming debt crisis have on its society and economy?

Lebanon’s government is still negotiating the issue of Eurobonds maturing next week, with analysts saying that whatever the steps, Lebanon will face an even more agonizing economic downturn. 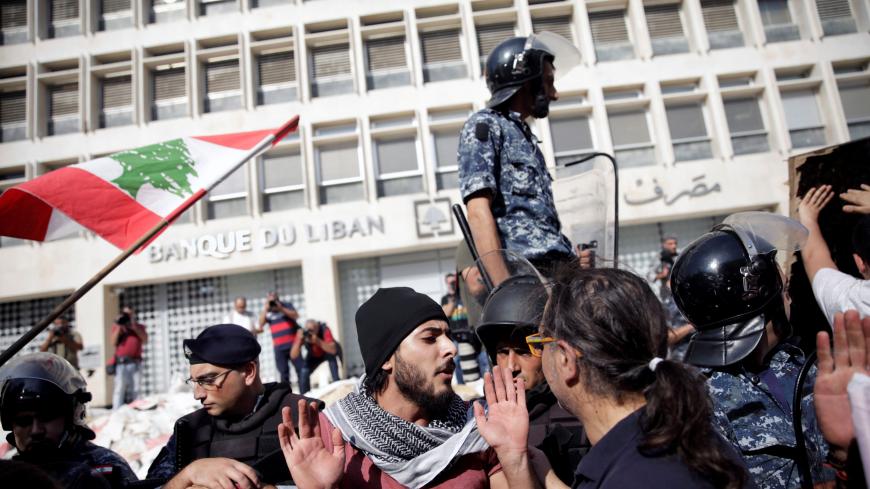 BEIRUT — Already beset by inflation, an economic recession and a lack of trust from large segments of the public, Lebanon’s month-and-a-half-old government is now also staring down a debt crisis ahead of a maturing $1.2 billion Eurobond payment due March 9. This payment marks the first of several deadlines that continue into April and June of this year, and makes up a part of the country’s total debt, which reached $90 billion at the end of 2019 — 150% of Lebanon’s gross domestic product (GDP). To address the looming payment, Lebanon has brought in the International Monetary Fund (IMF) for technical assistance, and has hired asset management company Lazard and the law firm Cleary Gottlieb Steen & Hamilton to advise it on a potential restructuring plan.

Prime Minister Hassan Diab said March 2 that a final decision on the Eurobond payment would be made March 6 or 7. The government has reportedly still been unable to reach a deal with bondholders, but some lawmakers and authorities have cited an orderly default as the preferred course of action, which would entail both a restructuring and rescheduling of Lebanon’s Eurobond debt.

According to financial experts and insiders, the socioeconomic effects of a restructuring would be far-reaching. For Lebanon to extricate itself from its fiscal and economic crises, longer-term restructuring of the banking sector must take place together with political reforms and the development of an export economy, allowing the country to emerge from its doldrums with a more reliable banking sector. However, in the short-term, a restructuring deal or a default would result in further devaluation of the Lebanese pound, continued price increases and further diminished standards of living, exacting a heavy toll in a country where a social safety net does not exist to mitigate such effects.

“Debt restructuring is inevitable,” member of parliament Alain Aoun told Al-Monitor. Aoun is a member of the Free Patriotic Movement, which backed the current Cabinet, and is engaging in consultations with Finance Minister Ghazi Wazni and other officials via parliament’s finance and budget committee. “The default, or what to do with the next payment, it has to wait for the negotiation. … [The] preferred course of action is to go into an orderly default, and not a disorderly default,” he said.

An orderly default would entail reaching an agreement with bondholders on how to restructure and reschedule debt payments — a goal that a minister speaking on background had outlined in a report released Feb. 28. Yet officials have largely remained mute on the specific goals and status of the ongoing negotiations. Economy and Trade Minister Raoul Nehme and the chairman of the finance and budget committee in parliament, Ibrahim Kanaan, both declined to comment for this story, while Wazni and other members of parliament could not be reached for comment.

Aoun said that reaching a deal is imperative to avoid a unilateral default, which would introduce risky “unknowns” into Lebanon’s situation. He added that negotiators are still looking at a variety of options on how to handle the upcoming payment, including several avenues for restructuring. Swapping bonds instead of paying the Eurobond has been proposed by banks to stave off a default, according to Bloomberg. Another reported option is a "haircut," which in Lebanon’s case would force depositors to give up a portion of their deposits to the banks.

One proponent of this strategy is Dan Azzi, a Lebanese analyst and former advanced leadership fellow at Harvard, who unlike others has endorsed a strategy to pay the Eurobond debt.

In his view, it would be possible for the Central Bank to use its reserves to pay off foreign debt holders and then write off the local debt by asking several thousand depositors to take a haircut. Azzi said he would leave the door open for refinancing down the line instead of restructuring if the need to do so presented itself.

But Lee Buchheit, who is teaching a course on sovereign debt management at the University of Miami School of Law, told Al-Monitor that of the various options available, the most prudent ones include asking for a rollover of the debt ahead of the start of a restructuring process, and subsequently formally involving the IMF, which would then likely put together a program that would recommend slashing the government deficit, reducing the debt stock and lowering the official value of the Lebanese pound.

Buchheit had previously assisted in dozens of sovereign debt workouts for a leading firm in the field.

Yet several experts noted that whatever the outcome of the negotiations — which seem likely to lead to an eventual restructuring of some kind — further devaluations of the Lebanese pound would take place, which would continue to wreak havoc on the Lebanese economy. The pound is now valued at around 2,500 pounds to the dollar, far weaker than the official exchange rate of 1,500.

“No politician wants to begin a debt restructuring,” Buchheit said, citing his own experience. “They know that it is painful, even if it is done as efficiently as possible. When the country recovers, it very often is in a much better position, and that’s fine, but the politicians of the day will wonder whether they will be the politicians in the future that enjoy the applause that comes from having engineered a recovery of the economy.”

“There’s the human side of it,” Mike Azar, a senior financial adviser in Lebanon, told Al-Monitor. “We talk about the numbers and restructuring, but this is going to have a massive impact on people’s lives in a country that already has zero social safety net.”

Azar added that the government should either dedicate remaining funds to support the Lebanese people as the situation worsens following the debt crisis, or seek out external funds to do so.

Aoun, the parliamentarian, said that while it remains unclear what the final outcome will look like, it is crucial that leaders pursue solutions other "than adding the burden on people.”

Sami Nader, the head of the Levant Institute for Strategic Affairs, said much deeper fixes are needed to solve Lebanon’s crisis.

“Unless a fiscal reform plan is put in place, there is little hope that things will get better,” he told Al-Monitor. “The debate is should we pay or should we not pay the Eurobond, while the core question is should we reform or not.”

Azar said that such reforms would have to go well beyond Eurobond restructuring, extending into the state deficit and Lebanon’s economy, which must transform into one that exports more goods than it imports.

“The restructuring process, restructuring the Eurobonds, restructuring the banking system, and the Central Bank, and then even the government budget, those are the steps you have to take to start getting out of what we’re experiencing now,” Azar said. “But it’s a long process, it’s difficult, it’s also going to have a big effect on people, a negative effect, but if you don’t do it, you’re just going to be going into an economic contraction that you’re just never going to get out of.”

Azzi said a holistic process of this sort would also ultimately leave Lebanon with a fairer, more reliable banking system, but with a standard of living that is closer to that of Lebanon’s neighbors in the region.

Although reports on this have been contradictory, the government may ask for a seven-day grace period in the coming days to give it more time to reach an agreement on the Eurobonds. It seems clear, however, that whatever decision is reached will only mark the beginning of a longer reform process, coupled with an even more agonizing economic downturn for a Lebanon that is already close to hitting rock bottom.