Lebanon’s new government has its work cut out for it

The newly formed Lebanese government is in for real challenges, mainly the crisis of the collapsing Lebanese pound and debt that has reached a record level. 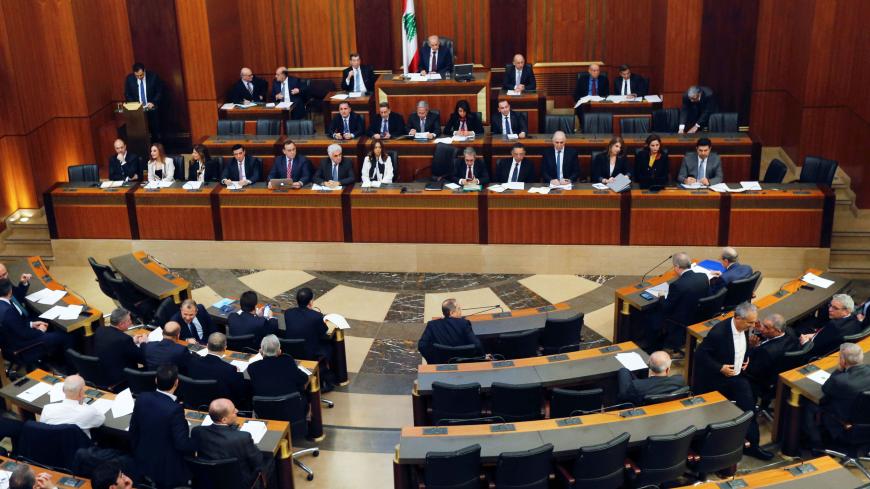 Lebanese Prime Minister Hassan Diab presents his government's policy statement to parliament during a session for a vote of confidence in Beirut, Lebanon, Feb. 11, 2020. - REUTERS/Mohamed Azakir

BEIRUT — Less than a month since its formation, Lebanon’s new Cabinet received a vote of confidence from parliament Feb. 11. The vote saw 63 of 84 legislators present give their confidence to the new government headed by Prime Minister Hassan Diab, a professor at the American University of Beirut who served an education minister in the 2011 government of Prime Minister Najib Mikati.

After the government was formed Jan. 21, Diab had vowed that his Cabinet — which is made up of 20 ministers, including six women — represents the aspirations of the protesters, and will work to ensure the independence of the judiciary and the recovery of looted funds and to fight against illicit enrichment and unemployment.

The newly formed government is in for some real economic and financial challenges, mainly the rise of public debt to a record level of about $90 billion, according to statistics from the Association of Banks. Lebanon — which ranked 137th on the list of least corrupt countries out of 180 countries, according to the 2019 Corruption Perceptions Index reported by Transparency International — is also slated to repay $1.2 billion in Eurobonds maturing March 9.

Minister of Agriculture and Culture Abbas Murtada told Al-Monitor that the ministerial statement includes items pertinent to the financial and economic situation. He added that he has been in contact with agriculture experts in order to lay out new plans to develop the agriculture sector in the country. Murtada said he has also been following up on the crisis of high taxes incurred by truckers and farmers from Lebanon to Syria.

With the parliament's approval of the 2020 budget Jan. 27, which was signed by Diab and referred to President Michel Aoun, the government seemed to have further begun working on trying to contain the anger in the streets, starting by refraining from imposing additional taxes on private electricity generators.

The parliament also decided, given the harsh economic situation, that bank loan defaulters will not be prosecuted and will be given a grace period of six months to resume paying off their loans.

Wazny said after the meeting that several options regarding paying the Eurobonds were discussed. On the capital controls, he said the government will issue a circular to end preferential treatment between banks and clients.

“The first challenge facing Diab’s government is to be able to demonstrate that it is a unity government and prove itself before the political parties that support it and those that do not, as well as before the Lebanese protesters,” Radwan Aqeel, a writer and political analyst, told Al-Monitor.

On a different note, the numbers of demonstrators that have been taking to the street since Oct. 17 have decreased and what started as peaceful protests broke into violence when demonstrators began breaking the display windows in Beirut on several occasions. The Lebanese army has also been keen on keeping all roads open, with the army’s commander, Gen. Joseph Aoun, asserting that “the freedom of movement is sacred in international charters.” The cold weather and rain also played a role in the dwindling numbers of protesters, especially in the hinterlands, mainly in the Bekaa in eastern Lebanon.

Aqeel said that the government wishes to meet the demands of the demonstrators, but that their dwindling numbers are mainly due to a lack of leadership and a clear vision of their goals and demands.

He said the government, in a bid to win the confidence of opponents and protesters, might try to push for a shorter term for parliament; the current one expires in 2022. The next elected parliament would elect Lebanon's president that year.

This is not to mention that the fluctuating unofficial exchange rate has greatly affected public servants and other employees whose paychecks are paid in pounds. In addition, many employees in the private sector have been laid off, Aqeel said.

“The government ought to present a clear economic vision, especially as the international community is monitoring the work of the [public] departments in Lebanon and demands the implementation of reforms as a condition to disburse any aid. Lebanon is pinning hope on the much-anticipated $11 billion from the CEDRE Conference for international donors and investors to support Lebanon's economy that was held in Paris on April 6, 2018,” Aqeel said.

He pointed to positive signs from the International Monetary Fund (IMF) to support Lebanon, but warned that any aid from IMF could be linked to Lebanon’s silence on the US Mideast plan, known as the "deal of the century," and the presence of the Palestinian refugees in Lebanon.

IMF Managing Director Kristalina Georgieva said Jan. 31 that the economic situation in Lebanon is difficult, and expressed concerns about the graveness of the situation.

IMF spokesman Gerry Rice said in a Feb. 12 tweet that after receiving a request form Lebanon, the “IMF stands ready to assist Lebanon. Any decisions on debt are the authorities’, to be made in consultation with their own legal and financial advisors.”

For its part, the World Bank stressed in a statement published on its website in October that it is providing international expertise to Lebanon to help its government implement reform projects. Saad Hariri, when he was still prime minister in December, discussed with IMF and World Bank officials ways to help the country draft a rescue plan and to offer technical assistance to Lebanon.

Jassem Ajaka, an economist at the Lebanese University, told Al-Monitor, “The IMF is Lebanon’s last resort. The IMF would directly lend to the Lebanese state at low interest, but this would give it free rein to interfere with the country’s fiscal and financial policies. This would reflect in extremely harsh reforms on the people.”

He insisted on the need to fight corruption at home before having to borrow from the IMF and said, “The fund may request the privatization of several public facilities, such as Middle East Airlines; the telecom companies, including Touch, Alfa and Ogero; the ports of Beirut and Tripoli; the Rafic Hariri International Airport; the Electricite du Liban and the Casino du Liban.”

Ajaka mentioned additional taxes and fees that could be imposed as part of structural reforms and the need to float the Lebanese pound if a potential IMF deal would be taken, which could adversely affect purchasing power and increase the poverty rate to more than 50%.

Now, after gaining the vote of confidence, Diab is planning to take a tour of Arab countries, starting with Saudi Arabia, to send a message that his government is open to Arab countries and that Lebanon will not give up its Arab aspect, Aqeel said.

The issue of the Syrian refugees is another thorny issue for the government, which seeks to expedite their safe return to their country, Foreign Minister Nassif Hitti said during a Feb. 5 meeting with Belgian Foreign and Defense Minister Philippe Goffin in Beirut.

According to the ministerial statement, which Al-Monitor received a copy of, the government will continue working with the international community to uphold its previous commitments to help Lebanon face the burden of Syrian refugees, stressing the rejection of any form of the refugees’ integration or resettlement in host communities.

The government will also work on a national strategy to fight against corruption, expedite its implementation, and issue decrees for the law on the right to access information. It is also committed to recover looted funds within a year by passing a law that would help uncover crimes in public funds, in addition to combating smuggling through legal and illegal crossings.