Is Lebanon caught in the crossfire of the current US-Iranian standoff?

With Iranian-backed Hezbollah playing a role in Lebanon's government, how much might the country suffer in case of a military confrontation between Washington and Tehran? 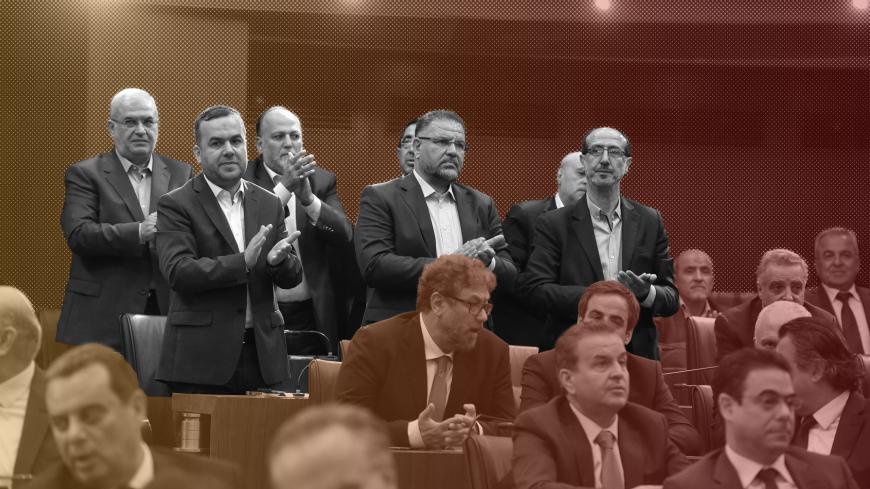 Members of Hezbollah parliamentary bloc seen as Lebanon's newly elected parliament convenes for the first time to elect a speaker and deputy speaker in Beirut, Lebanon, May 23, 2018. - Lebanese Parliament/Handout via REUTERS

BEIRUT — A general look at Lebanon’s financial history shows that the country is influenced by the political and security situations in the region. As Lebanon is waiting for $11 billion in soft loans and grants it had secured from international donors in the Paris conference in April 2018 to bolster the country's dwindling economic growth, the shadow of a major standoff between the United States and Iran is looming on the horizon.

Tensions between the United States and Iran have been gradually building up for months. Washington withdrew from the Iran nuclear deal in 2018, launching an all-out pressure campaign against Tehran, which started lashing out. In June, the standoff began to spiral as Iran downed a US military drone and President Donald Trump called off a retaliatory strike on Iran.

The escalation against Tehran has affected Lebanon, namely Hezbollah. On July 9, the US Treasury placed three Hezbollah members on its sanctions blacklists, including the head of the party’s parliamentary bloc, Mohammad Raad, Beirut member of parliament Amin Sherri and Wafiq Safa, a top Hezbollah security official. Washington said Hezbollah is providing support to terrorist organizations. The United States has designated Hezbollah as a terrorist group.

This suggests that Lebanon is likely to serve as a point of some sort of conflict between the two antagonists. The pertinent question, however, is how this situation will affect Lebanon’s financial situation.

In 1992, the economic situation went downhill and the government of Prime Minister Omar Karami fell after demonstrations protesting the poor economic conditions, as the Lebanese pound reached 2,825 against the dollar. By the end of 1992, the pound had improved to 1,800 against the dollar, and in 1993 Riad Salameh was named governor of the Central Bank of Lebanon and adopted policies that helped stabilize the pound.

However, over the years, Lebanon has acquired a growing public debt. According to a paper published in April 2018 by Raed Sharaf al-Din, the Central Bank's first deputy governor, this had reached $80 billion, or 160% of gross domestic product. While he said the country's challenge lies in the debt, he also said, "A strong monetary policy and financial stability are the strongpoints of Lebanon.”

In February, a Reuters story said the country's large current account deficit was being covered in part by Central Bank reserves of $40 billion and the knowledge that Lebanon has relatively large gold holdings of nearly $12 billion.

Economist Ghazi Wazni told Al-Monitor, “The financial situation is delicate because of the decline in financial flows and the withdrawal of some deposits from Lebanon, not to mention the decline in foreign reserves by about $6 billion since the beginning of 2019.”

In January, Bloomberg reported that the Lebanese government's “debt is projected to rise to near 180 percent [of GDP] by 2023, second only to Japan’s, according to IMF estimates. Lebanon’s debt risk, measured by credit default swaps, has risen the most in the world over the past year, apart from Zambia and Argentina, according to data compiled by Bloomberg.”

In light of the foregoing, how would the Iran-US standoff and a potential full-blown confrontation affect Lebanon? According to Sami Nader, director of the Levant Institute for Strategic Affairs, the growing tension and conflict between Arab countries and Iran, and between the United States and Israel on the one hand and Iran on the other, will affect Lebanon given that Hezbollah is represented in the Lebanese government and has a military arsenal.

“Hezbollah could be used to increase pressure on Iran, while Tehran could also use the Lebanese party to alleviate the embargo imposed on it,” Nader told Al-Monitor.

Nader added that Iran is aware of the fragility of the economic situation in Lebanon and believes that the situation is worse today than in 2006, in terms of liquidity, the balance of payments deficit and the declining growth rate. After the 2006 Lebanon War between Israel and Hezbollah, the Lebanese Ministry of Finance said the war had aborted all efforts for further economic and financial stability; economic growth for that year had been projected at 5%, but instead the country suffered losses estimated in the billions.

Salameh said at the Euromoney conference held in Beirut on June 25 that the country’s growth rate stands at 0% this year, Reuters reported.

Jassem Ajaka, a professor of economics at the Lebanese University, told Al-Monitor that Trump’s push against Iran could increase pressure on Hezbollah.

He said Beirut's rejection of Trump’s Israeli-Palestinian peace plan, often referred to as the deal of the century, might affect the country economically.

Following a Cabinet session June 27 that was chaired by Prime Minister Saad Hariri, Lebanese Industry Ministry Wael Abu Faour said, “The Lebanese government position on [the deal of the century] is clear. There is consensus in Lebanon to reject it.”

Ajaka said several disastrous scenarios could play out in the event that a full-blown confrontation takes place with Iran. He said Lebanon could be placed under embargo should a battle break out between Hezbollah and Israel in a scenario similar to the July 2006 war. In this context, Israel might seek to destroy important economic infrastructure to pressure the Lebanese public, which would affect the expatriate remittances that help hold up the economy in addition to restricting imports and exports and the movement of Lebanese businesspeople.

“Remittances from overseas reach between $7 or $8 billion annually," Wazni said.

Ajaka, however, said the United States is committed to preserving the Lebanese banking system. He said that if Washington imposed sanctions on Lebanon, they would not be comprehensive, as the country constitutes an important part of the new US strategy in the Middle East.

Ajaka said the deal of the century is also part of the US-Iranian conflict, as the United States is seeking to make it a reality while Iran is fighting based on its commitment to the Palestinian issue and its belief that the United States and Israel are trying to impose an economic peace, disregarding the political dimension of the conflict.

“And since Lebanon has distanced itself from the deal, the country could face some repercussions, mainly delays in the exploration and extraction of gas offshore. Israel could also seek to establish a railway connecting Tel Aviv to the Arab world, which could negatively affect Lebanon as it would mean Beirut would no longer be the first transit [port] center to the Arab countries,” Ajaka said.

Wazni said Iran and Lebanon have poor economic ties, with only $60 million in imports from Iran and $20 million in exports annually.

Wazni added that Lebanese businessmen had postponed many investment projects they had planned in Iran. The projects had developed as part of their visit to Tehran two years ago after the US-Iran nuclear deal was signed, providing hope for the bolstering of economic ties between Beirut and Tehran. Wazni also said that banking ties are practically nonexistent between the two sides, not to mention that there are no Iranian funds in banks in Lebanon. Wazni also said Lebanon has been committed to the implementation of US decisions for 15 years, including with regard to the sanctions on Tehran, which prevented the development of economic ties between Tehran and Beirut.

Wazni provided a broad overview of the challenges facing the Lebanese economy. He said foreign direct investments has fallen by 45% since 2010. "Revenues from tourism used to reach $10 billion and today they stand at $6 billion," he said, adding, "The banking sector growth is 3% in 2019 as opposed to between 7% and 8% before. In 2018, the deficit in the balance of payments reached $4.8 billion.”

Nassib Gobril, chief economist at Byblos Bank, told Al-Monitor that Lebanon would be affected if the situation deteriorated in the region. “Lebanon is already staggering now under the economic crisis. The expats’ remittances and deposits are also affected by oil prices. Any war would adversely affect the country’s tourism sector,” Gobril said.

“Any increase in oil derivatives would have a negative impact on Lebanon as they constitute 20% of the general import bill as opposed to 24% in 2014. Should this bill increase, the deficit in the trade and payments balance would worsen and fuel prices in gas stations would rise. This would increase inflation, reduce purchasing power, increase the electricity bill and bring about more treasury transfers to the electricity company to offset this change. This would ultimately cause the budget deficit to grow,” he said.

Gobril said domestic decisions, not international security issues, are largely to blame for the situation Lebanon is in. He said 2017 government miscalculations on the costs of pay increases and for other expenditures and an increase in taxes backfired on local markets and caused an economic slowdown. He said taxes have affected consumption, income, and movable property, causing a liquidity crisis.

“In 2017, the economic growth recorded a rise of 0.6%, 0.3% in 2018. The fiscal deficit widened from 7.2% of GDP in 2017 to 11% in 2018,” Gobril said, adding that all the foregoing was the result of domestic, not regional decisions, but that any major security shock in the region would further exacerbate an already bad situation in Lebanon. 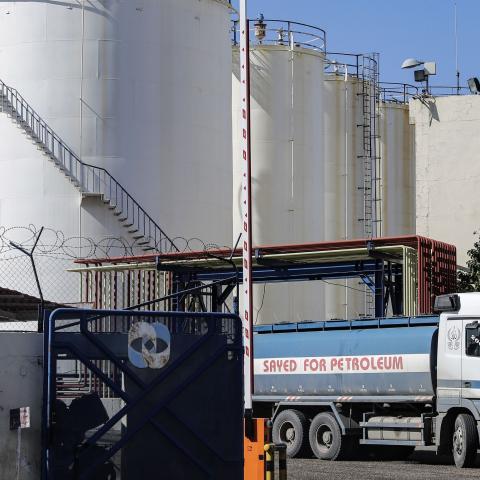