Lebanon's fixed exchange rate has been a pillar of stability for two decades. However, poor economic conditions threaten its sustainability. 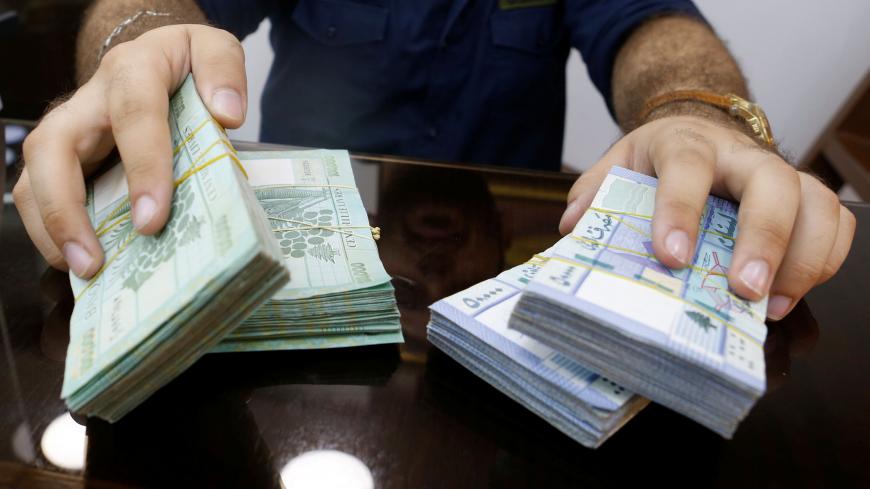 These precarious economic conditions have raised concern over the country's ability to maintain one of its most successful monetary policies: the fixed exchange rate between the Lebanese pound and US dollar.

This economic instability was in large part due to the Lebanese Civil War, which began in 1975. But by the mid-1990s, the conflict was de-escalating and reconstruction was a priority. However, the government struggled to attract investors due to currency inflation. One answer to this was a currency peg, fixing 1,507.5 pounds to 1 dollar by 1997.

Simon Neaime, professor of economics and finance at the American University of Beirut, explained to Al-Monitor, “It was done to signal that your investments that come in will have the same purchasing power or the same value when you get it out.” He added that it also gave local banks the confidence to loan the government the capital it needed for reconstruction.

The burden of keeping the Lebanese pound and the dollar equal fell on Lebanon’s central bank, Banque du Liban, which used its foreign currency reserves to defend the peg.

This largely manifested through Banque du Liban buying government debt and instituting high interest rates designed to incentivize people to deposit their money in the country.

A side effect of this was that local banks could make money through favorable interest rates and buying up government debt as opposed to investing in productive industries.

Toby Iles, director of Middle East Africa Sovereigns for Fitch, told Al-Monitor, “The negative [here] is partly that banks can make [a] profit by buying government debt, while the healthier thing would be for banks to lend to the economy which goes into productive sectors, which would mean the economy is less out of balance.”

However, as long as money flowed into Lebanon, Banque du Liban’s reserves were high, government debt was bought and the peg was stable, but, as Neaime noted, “The story lately has changed.”

Currently, the reserves — excluding gold and other assets — are declining, with some predicting that without reforms, the reserves can only cover another year.

Iles explained, “How high do reserves need to be to maintain confidence? There are a number of indicators to analyze, but it is kind of an unanswerable question.”

He added, “The thing that concerns us most recently is that you have had this pressure on bank deposits and reserves and yet there hasn't been a singular big crisis or event.”

Previously, when Lebanon went through an economic crisis, there was a singular event that shook confidence — be it the assassination of Prime Minister Rafik Hariri in 2005 or the 2006 Israeli war.

Currently, the situation is a death from a thousand cuts: the resignation of Prime Minister Saad Hariri in 2017; the stalled government formation last year, which lasted nine months; delay in the 2019 budget; sanctions on Hezbollah; escalation with Israel; and the conflict in neighboring Syria.

The accumulation of these issues has led to a lack of confidence in Lebanon’s stability and seen foreign investments and remittances drop off. In a country that imports more than it exports, these capital inflows were a major avenue for Lebanon to equalize its balance of payments and keep its reserves high.

Lebanese inside the country have also been shaken by poor economic conditions, reducing their deposits in local banks and converting them into dollars, which is seen as more stable, resulting in a rise in dollarization.

To solve this, interest rates — particularly on government debts — rise to keep money in the country by providing better returns. However, this has contributed to government debt — the majority of which is held by the central and local banks — as an expense taking up 47% of state revenues, according to Fitch.

But this is a catch-22, with the government spending and Banque du Liban dipping into their reserves to ensure money stays in the country, while a major reason why money is leaving the country is because Lebanon is spending too much and reserves are declining.

Neaime said, “The high interest the government is paying is affecting the deficit because it is government expenditure and it is increasing the debt.”

Banque du Liban has engaged in financial engineering previously to keep the exchange rate fixed and could do something similar again. However, Neaime said, “I think they have used most of their tricks, I don't think they have much left.”

However, Marwan Mikhael, head of research at BLOMINVEST, the investment arm of one of Lebanon’s largest banks, told Al-Monitor that this “vicious cycle” could, with the right measures, be turned into a “virtuous cycle.”

Part of this requires the government to reduce the gap between their spending and revenues through reforms — which Mikhael said was occurring behind the scenes for the state-owned electricity provider, Electricite du Liban, which costs the state up to $2 billion a year.

However, Lebanon will also need to secure capital inflows, which could be delivered in the short to medium term through the $11 billion worth of soft loans offered at the CEDRE Conference, and even the prospects of oil and gas. Then confidence would recover, and the situation could improve.

However, Neaime said it is a “race against time,” even though very few in Lebanon want the peg to go.

Iles said, “I don’t think Lebanon would want to pursue a policy of changing [the peg], the central bank would really want to hang on to it. There are good reasons for that; in the near term, coming off the peg won’t have any immediate positives, but it would have a lot of negatives.”

He added that they would include “an effect on GDP per capita, living standards, government debt would be higher, the banking sector would face issues across their balance sheet and there would probably be a big recession.”