As the Lebanese government passed a new budget that includes tax hikes and spending increases, economic experts are calling on politicians to instead focus on fighting corruption and money waste in state institutions. 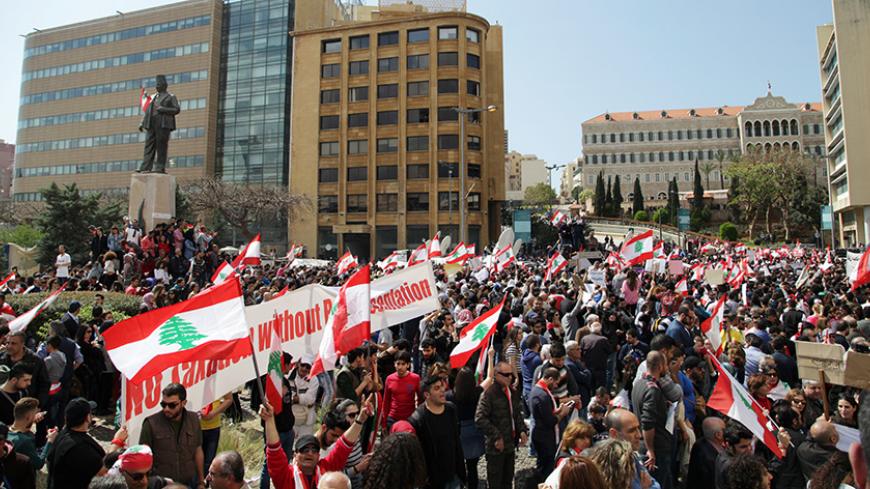 Protesters wave Lebanese national flags during a demonstration against a proposed tax increase, in front of the government palace in Beirut, March 19, 2017. - REUTERS/Alia Haju

The large protests in Lebanon on March 15, which were triggered by fresh tax hikes passed by the Lebanese parliament, underline the population’s unease with the politicians’ disastrous governing policies that focus on increasing revenues without implementing much-needed reforms, in light of a failing economy plagued by corruption and waste.

“The current government policies are completely upside down,” Nassib Ghobril, the chief economist at Byblos Bank, told Al-Monitor. “After six years of [economic] slowdown, the new budget — the first to be passed by the Cabinet in 12 years — should stimulate the economy and reduce spending; it has done neither.”

On the contrary, the budget includes increased taxation and spending. Higher taxation means a slowdown of the economy that is at an all-time low, plummeting last year to 1% growth, according to Ghobril. As a measure of comparison, Lebanon’s economic growth rate was 1.3% in 2015 while the growth rate of the United Arab Emirates was 3.1% in the same year.

The new taxation is expected to have repercussions on Lebanon’s growth rate in 2017, as it impacts all economic sectors and social classes. A case in point is the value-added tax, which was raised from 10% to 11%, as well as hikes in other taxes on financial transactions. Lebanese independent economist Ghazi Wazni told Al-Monitor that a tax of 6,000 Lebanese pounds (about $4) was imposed on the production of each ton of cement; taxes on bank deposits will also increase from 5% to 7%, and on corporate profits from 15% to 17%; and a 15% tax on real estate gains was also introduced.

“The government is imposing new taxes in a difficult economic context: Unemployment is at over 25% and poverty levels are rising; the poverty rates included 160,000 more people in the period from 2011-2016, reaching an all-time high of 32%,” Wazni said.

The taxes will be partly used to finance the public sector wages. Yet economists are concerned that the new budget does not envision any real reforms. “There are discussions on reforming the electricity sector; it’s an improvement compared to other governments,” Wazni noted.

Ghobril, however, does not feel that mere discussions are enough. “There is no real reform plan. The cost of financing the electricity sector already amounts to $25 billion, constituting one-third of Lebanon’s $76 billion debt," he said.

Other reforms, experts say, should focus on the privatization of the telecommunications and the water sectors, eliminating corruption, improving infrastructure and making business deals easier to achieve.

“Lebanon is one of the most corrupt countries in the world, ranking 137 out of 176 countries. It has lost around 20 places in 10 years,” Wazni said.

“Instability, corruption, lack of reforms and the absence of liberalization of economic sectors have translated into a drop in the level of investment into the country, which declined from 15% of gross domestic product in 2008 to less than 5% of GDP in 2015,” Ghobril explained.

The decrease in foreign direct investment and the slowdown of the economic cycle reflect on the various sectors, including the vital tourism sector, meaning that the government is facing a mounting deficit. “This has in turn reflected on the growing debt, which now represents 144% of GDP and will reach in 2021, according to the World Bank, $110 billion or 160% of GDP,” Ghobril said.

According to Ghobrl, the debt per Lebanese adult amounted to $14,000 in 2016, up by 10% a year earlier. This is considered the 35th highest debt amount in the world. Conversely, the average wealth of Lebanese adults stands at about $10,000. In Lebanon, only 3% of the population has a net worth of over $1 million.

The impact of the debt is also increasing pressure on the Lebanese banking sector, which owns about $35 billion of the public debt, Ghobril noted.

“Lebanon enjoys relative financial stability that can be largely attributed to the solidity of its financial sector,” Ghobril said. He added that Lebanese banks have been able to attract significant deposits from its large diaspora and foreigners, amounting to $166 billion in 2016.

In July 2016, the World Finance website reported, "In 2015, the World Bank estimated inflows of remittances to Lebanon at $7.2 billion — a figure equivalent to 14% of the country’s GDP — ranking Lebanon as the 16th largest recipient of remittances globally and the second highest among Arab countries.”

These transfers are more or less stable, although they decelerated by 5% last year, Wazni said. The decline can be attributed to the poor economic growth in countries where the Lebanese diaspora resides, such as in the Gulf states and Africa, which have been adversely affected by the drop in oil prices.

Lebanese businessman Mohamed Amouch, who works in the UAE, agrees that the regional economic situation has been tough. “We have over $10 million in the market and have been able to collect … less than 20% of this amount,” he told Al-Monitor. “This definitely translates in lower remittances sent to Lebanon.”

In such an unfavorable framework, Lebanon needs to avoid any shocks to its financial sector that could trigger withdrawals — shocks such as in 2005 when then-Prime Minister Rafik Hariri was assassinated and in 2006 when Israel launched a war in Lebanon. Another shock could also be triggered by the resignation of Central Bank Gov. Riad Salameh, who has succeeded in inspiring local and international confidence.

“Politicians have to act responsibly in regard to the economy and stop being complacent or irresponsible. The economy needs to be reformed before Lebanon is faced with a major crisis,” a banker told Al-Monitor on condition of anonymity.

He added, “Failure to tackle corruption and instead targeting citizens' bank accounts will lead to bankrupting the state, destroying the economy and impoverishing the Lebanese.”