Amid reports that the Lebanese government plans to merge and liquidate some banks, citizens are concerned about their deposits while the economic situation continues to deteriorate. 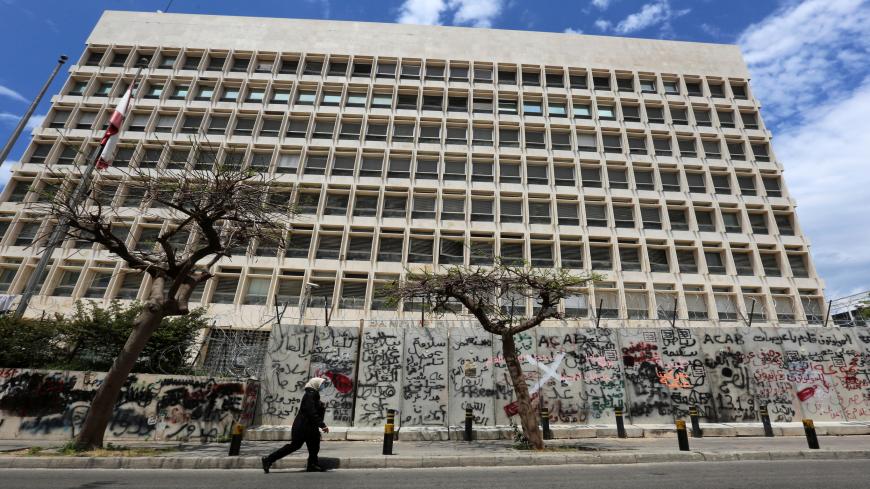 A woman wearing a protective mask walks past the central bank building as Lebanon extends a shutdown to curb the spread of the coronavirus, Beirut, Lebanon, May 5, 2020. - REUTERS/Aziz Taher

BEIRUT — There have been widespread reports recently about the Lebanese government’s desire to restructure the banking sector. Minister of Finance Ghazi Wazni said May 15, “The government is seeking to reduce the number of banks in Lebanon — currently amounting to 49 banks — by around 50%.”

Wazni’s comments came as the country entered into negotiations with the International Monetary Fund (IMF) to secure financial aid in the form of loans in return for economic reforms that Lebanon is expected to enact.

Lebanon’s monetary and financial crisis has led thousands of Lebanese to take to the streets on Oct. 17, 2019, to protest against the deteriorating economic and living conditions plaguing the country. Since then, the Lebanese people have been queuing up in front of banks across the country to receive parts of their deposits, after banks began to impose restrictions on foreign currency withdrawals.

The protests are still ongoing albeit at a lighter pace due to the coronavirus lockdown. Meanwhile, demonstrations took place on June 6 in Beirut's Martyrs Square.

Jad Chaaban, associate professor of economics at the American University of Beirut, boiled down the current banking crisis to two main points.

“First, banks lent the Lebanese state a lot of money, but the state failed to repay this money. In other words, the public sector failed to pay off its debt to the banks. The private sector and bank customers also failed to pay off their loans due to the deteriorating economic and living conditions in the country. Second, bank deposits in US dollars have declined,” he told Al-Monitor.

Based on this, the government is seeking to reduce the number of banks in order to be able to weather potential challenges and meet depositors’ needs.

This government’s plan has sparked debate on the mechanism that will be adopted to reduce the number of banks.

Economists and bankers in the know on this issue told Al-Monitor that merger and acquisition will be the name of the game in this regard. They also said that some banks will be liquidated.

Meanwhile, they said, five new banks will be opened in order to reassure customers and restore their confidence, as there are people who believe that the banking sector will only restore customers’ confidence if foreign banks proceed to open branches in Lebanon.

Chaaban believes that in light of the current diminishing deposits and the asset crisis, banks will not be able to survive, which makes it necessary to resort to mergers and closures so that the banking sector becomes proportional to the size of the local economy.

“To recover their funds, banks are currently demanding shares in the public sectors. Meanwhile, the IMF proposed merging banks and deducting part of the funds from large depositors, whose percentage accounts for 1% of the total depositors, thus becoming shareholders in the capital of new [merged] banks,” he added.

Economist and head of the Lebanese Institute for Market Studies Patrick Mardini told Al-Monitor that “reducing the number of banks would affect competition, and this would negatively affect customers.”

He said, “Merger and acquisition in light of the current crisis is normal. However, the government should not focus on the number of banks but on the mechanism that will be followed in regulating the sector."

Mardini added, “What scares me is that the government’s method of forced merger and acquisition may lead to corruption in the sector and to monopoly on the part of some banks backed by political parties at the expense of other banks. Competition remains the best option."

He noted that it is of paramount importance to facilitate the entry of branches of foreign banks to Lebanon in order to give the Lebanese wider options in the coming stage.

Jassem Ajaka, a professor of economics at the Lebanese University, told Al-Monitor, “Reducing the number of banks is not the ultimate goal but rather the result, the goal being to maintain deposits and raise bank capitals. The number [of banks] does not serve as a performance indicator, and state intervention in the economy is not desirable.”

This is in line with the circular of Lebanon’s central Bank, Banque du Liban, issued on Nov. 4, 2019, whereby banks were asked to raise their capital by 20% until the end of June 2020.

Nassib Ghobril, chief economist and head of the Economic Research and Analysis Department at the Byblos Bank Group, told Al-Monitor, “It is not the government but the market dynamics, economic situation and competition that determine the size of the sector, and the government requested exceptional powers to intervene and regulate the sector. The market pressures will automatically lead to mergers and acquisitions. This decision is usually made by the boards of directors of banks and public assemblies.”

He noted, “Banks were directly affected by the government’s decision to stop paying its eurobonds, knowing that banks hold part of such bonds, and the [banks’] revenues in foreign currencies have been subsequently withheld."

The Lebanese government announced March 7 that it would discontinue payments on all its foreign currency eurobonds due in March 2020, thus marking the country’s first-ever default on its sovereign debt.

Lebanon is currently in negotiations with creditors to restructure the debt in light of a financial crisis affecting foreign currency reserves.

“There are signs of negotiations or talks that will take place between the Association of Banks and the relevant government and central bank officials, and this will affect the issue of reducing the number of banks. The association's plan preserves part of the banks' capital and requires the state to avoid defaulting on treasury bonds in Lebanese pounds,” Ghobril said.

On May 20, the Association of Banks announced an alternative plan to the government’s financial plan, which was developed without it [the association] contributing or giving its input thereto, as per Ghobril, who said that “the alternative plan aims to support economic activity and preserve depositors, and the two parties have agreed to find a unified vision regarding losses and costs.”

This raised the concerns of some depositors about their deposits in Lebanese banks.

Mira Kanso, a citizen from the southern town of Nabatieh, told Al-Monitor, “I am scared because I do not know what lies in store for my bank deposit once the bank is shut down or liquidated, especially considering that the central bank used our deposits to lend to the economically powerless state.”

Mustafa Raad from the Bekaa Valley told Al-Monitor, “There is a lack of confidence in the banking sector in Lebanon because we queue up just for the sake of collecting a small part of our money, and this confidence will not be restored in the event of a merger,” he said.

Experts have expressed another kind of fear related to bank employees. According to Chaaban, the banking sector counts around 25,000 employees, a large part of whom are at risk of losing their jobs, which would have a large social impact — greater even than the economic impact.

“The government’s implementation of such measures will roughly halve the number of workers in the sector,” he added.

Lebanon has been suffering from a high unemployment rate, especially in the recent period, due to the economic crisis and the closure of a large number of institutions.

According to a study published May 26 by International Information, an independent studies, research and statistics organization in Lebanon, there are expectations that the number of unemployed in Lebanon will reach 1 million in the coming months — or 65% of the workforce — if the authorities fail to adopt an urgent plan to solve the deteriorating economic situation. Before the protests broke out in October 2019, the number of unemployed stood at 350,000 — or 25% of the total workforce — according to the study. But since then, and with the economic downturn linked to the coronavirus crisis, around 80,000 people have been fired from their jobs, and the unemployment rate subsequently increased to 32%.