In Lebanon’s new wave of protests and riots, Tripoli is leading the way

Lebanon’s protests have resumed, but more violently, especially in Tripoli, where bank facades were smashed and a protester was killed by the army. 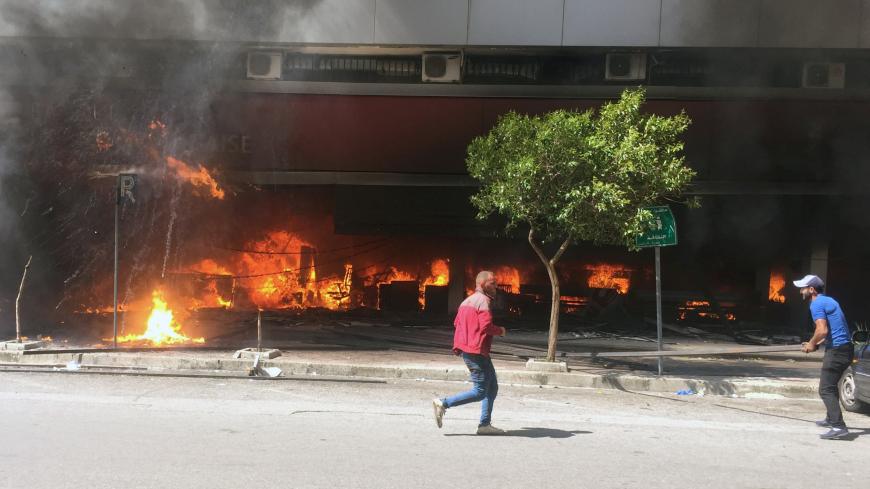 Demonstrators are seen near a bank on fire during unrest, as an economic crisis brings demonstrations back onto the streets in Tripoli, Lebanon, April 28, 2020. - REUTERS/Omar Ibrahim

On April 27 and 28, when protesters attacked banks and clashed with the Lebanese army in Tripoli, activist and protest coordinator Marianne Richa felt like she was reliving her memories of Lebanon’s civil conflict.

She recounted how new groups of “hungry” protesters had joined demonstrators in Tripoli’s central square the night of April 27, when security forces fired rubber bullets, tear gas and even live gunfire as protesters burned bank branches and headed toward local politicians’ residences in the city. The next two days saw demonstrators continuing to attack financial institutions, facing off with Lebanese army tanks and security forces’ batons.

After a tenuous standstill reached during Lebanon’s coronavirus lockdown, protests and riots have reemerged in Lebanon and spread to various cities over the past week. An ongoing economic meltdown, a currency inflation crisis and rapidly declining standards of living exacerbated by the coronavirus pandemic have inspired attacks on the country’s financial institutions and have persuaded many demonstrators to abandon peaceful forms of protest out of anger and despair.

While solidarity protests have taken place across the country, the epicenter of Lebanon’s new protest wave remains Tripoli, where extreme poverty, coupled with the killing of 26-year-old Fawwaz Fouad al-Samman by the Lebanese army the night of April 27, are continuing to fuel the newly dubbed “hunger revolution.”

Samman was killed after rioters destroyed and burned several major bank branches in downtown Tripoli that night, although his family claims he was not personally involved in any acts of vandalism. In the two days following his death, protesters burned additional banks across the city and threw Molotov cocktails at military vehicles.

Lebanese Prime Minister Hassan Diab, along with UN Special Coordinator for Lebanon Jan Kubis, suggested that the riots in Tripoli and the attacks on banks were deliberate acts of incitement by political groups. Protestors Al-Monitor spoke with have rejected such characterizations.

Lebanon has been in the throes of an economic collapse since well before the beginning of the country’s protest movement Oct, 17, but the crisis has been exacerbated recently by the rapid devaluation of the Lebanese pound, which had reached exchange rates of nearly 4,000 pounds to the dollar last week. Since April 28, the Central Bank has ordered exchange dealers to sell dollars at a maximum of 3,200 pounds each, but several dealers have since been arrested for failing to abide by these orders. The Syndicate of Money Changers has reportedly closed all its shops in protest of these arrests.

As prices have continued to rise and joblessness has increased throughout the state-imposed lockdown during the coronavirus crisis in Lebanon, the government has been unable to deliver emergency aid to the estimated 75% of Lebanese citizens in poverty, and postponed such aid indefinitely April 13. However, the government did pass an economic recovery plan April 30 that includes provisions for a social safety net for Lebanon’s poor and a restructuring of Lebanon’s debt and banking sector. In order to remain afloat financially, the Lebanese government officially requested financing from the International Monetary Fund on May 1.

Lebanon, where there were 741 confirmed coronavirus cases as of May 5, has been able to avoid high numbers of cases. Health professionals have attributed the government’s early response and effectiveness of the nationwide lockdown for Lebanon’s relative success so far, and the country has begun gradually opening up its economy this month.

In Tripoli, economic concerns reportedly far outweigh worries about the coronavirus. More than half the population already lives in poverty, and the number may increase to 80% by some estimates as a result of the economic downturn.

At a protest in front of the Central Bank in Beirut on May 1, protester Nina Najjar told Al-Monitor that conditions in Tripoli are quickly reaching crisis levels, with levels of hunger skyrocketing.

Demonstrations have taken place across Lebanon this past week in support of the country’s second city, in places as far away as Sidon and the Bekaa Valley, as well as in Beirut. Small explosives and Molotov cocktails were thrown at banks in Sidon, Tyre, and Beirut starting April 25.

Banks have emerged as a major target of the recent protests due to months of informal capital controls, restrictions on withdrawals and the banking sector’s perceived role in precipitating the collapse of the Lebanese economy and financial system.

Mohanad Hage Ali, a fellow at the Carnegie Middle East Center in Beirut, told Al-Monitor that because of the decreases in purchasing power and the devaluation of people’s salaries, many of those who remain employed “would become basically as good as jobless.”

“The atmosphere will surely become more [violent] than this,” said Ahmad, a protester in Beirut who did not give his last name, during a march the night of April 28; it was a music-filled gathering more typical of Lebanon’s first wave of demonstrations. “Just like how [the political class] starved our children, we want to starve [their] children,” he told Al-Monitor

In a recent report, Human Rights Watch determined that the level of force used by security forces April 27 and 28 was unjustified and excessive. Family members of Samman, who died several hours after being injured near Nour Square in Tripoli, told Al-Monitor that the doctor treating his injuries confirmed that he had been shot with live ammunition, not with rubber bullets that the security forces had used in the past. Jamal Masri, a demonstrator who spoke to Al-Monitor from his hospital bed in Tripoli, was shot in the back by security forces April 28 and spent several days in intensive care. It remains unclear whether he was shot by rubber bullets or live ammunition.

The Lebanese army released a statement April 28 expressing “regret” for Samman’s death and saying it respects the right of citizens to protest as long as they refrain from damaging private property. According to statements from the military, 113 soldiers were injured during the three days of riots, while 84 protesters were reportedly injured over the same period.

Richa and others who were present on the streets of Tripoli on April 27 and 28 maintained that they would prefer to continue the revolution as peacefully as possible. But others maintained that behaving peacefully has become difficult.

“Of course we don’t want violence with the army,” protester Ali Kamal el-Ali told Al-Monitor in Tripoli on May 2. “However when we are angry, when the hungry people are angry, especially against the political situation and against the rule of the banks, it is our right to get rid of this kind of rule.”

Following clashes between demonstrators and the army the night of April 29, events in Tripoli and elsewhere have remained largely peaceful — a march to Samman's family home May 3 took place without incident, and a sit-in took place in solidarity with him May 4. But anger continues to simmer, and has become compounded by the deadly consequences of the past week’s events.

“I want his rights,” Rana Dimassi, Samman’s mother, told Al-Monitor in her home. Dimassi and other members of Samman’s family place part of the blame for his death on the negligence of the hospital where he received treatment. They are seeking justice; if this does not take place, they say they are prepared to take to the streets themselves to voice their demands.

“Expecting a hungry population to demonstrate peacefully is pretty much unrealistic,” Hage Ali said. “I just can’t see how an increasingly impoverished population can stay sane.”