Protests that started in mid-October have intensified significantly due to the Beirut port blast, with Prime Minister Hassan Diab announcing the government's resignation Monday evening. 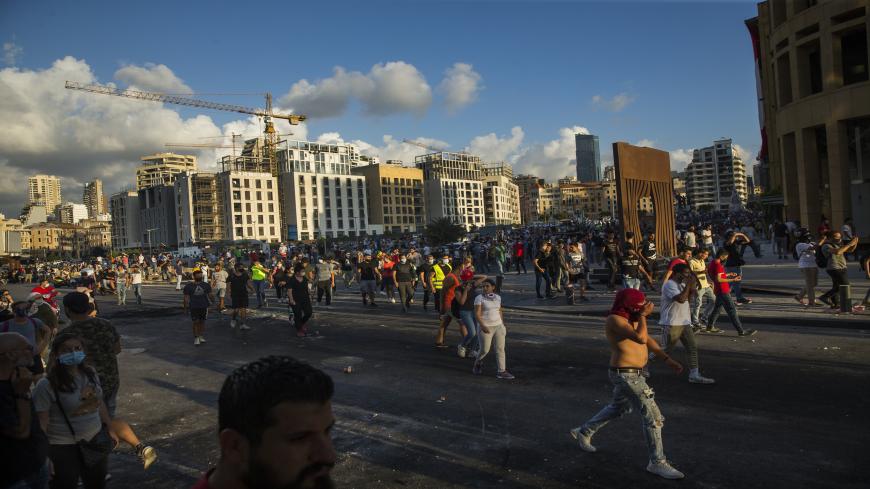 People make their way toward a clash happening between two separate factions of protesters during a protest at Martyrs' Square, Beirut, Lebanon, Aug. 9, 2020. - Daniel Carde/Getty Images

BEIRUT — Lebanon's government has resigned following a weekend of massive protests demanding justice for the victims of the Aug. 4 explosion in Beirut which left over 150 dead and thousands injured.

Under the slogan “Judgment Day,” thousands of protesters took to the streets of the Lebanese capital Aug. 8 — from Riad al-Solh to Martyrs’ Square in the downtown area — calling for punishment of those responsible for the explosion of 2,700 tons of ammonium nitrate in Warehouse 12 in the port of Beirut. The blast ripped through Beirut and destroyed a huge part of the port's surrounding neighborhoods — like Gemmayze, Mar Mikhael, Martyrs’ Square and Ashrafieh — killing hundreds and injuring more than 6,000 according to the latest figures released Aug. 8 by the Information Office of the Ministry of Public Health.

Protests continued into Sunday, with demonstrators demanding the fall of the government. The resignations of Information Minister Manal Abdel Samad and Environment Minister Damianos Kattar failed to quell demands.

Following a cabinet session held at the Grand Serail Monday, Prime Minister Hassan Diab announced in a televised speech that his government will resign. Diab said the blast was "the result of endemic corruption," and called for holding those responsbile to account. There are reports that Diab will stay on in a care-taker role until a new government is formed.

Throughout the weekend and into Monday, demonstrators had expressed their frustration with the political class. On Aug. 8, massive crowds protested in Lebanon’s streets due to the deteriorating living and economic conditions, and requesting justice following the catastrophic blast.

Ali Heidar, a political activist who has been participating in the popular protests that started Oct. 17, told Al-Monitor, “[Saturday's] protest outweighed the Oct. 17 one because of protesters’ simmering, unprecedented rage since the October revolution.”

He added, “The main drive of yesterday’s protest was people’s deep sense of the government’s disdain for its people.”

Fatat Ayad, a protester who took to the streets in October, told Al-Monitor, “I took to the streets yesterday because I have nothing left to keep me home. I could have died in the explosion, which is a result of the government’s corruption over 30 years.”

She added, “We — the people in the streets — have so much rage inside us, something I have never witnessed before. People have died because of the government’s slackening and failure to play its role after the blast. We are protesting to ask the government to step down. I think we achieved something yesterday. We broke the taboo by hanging gallows in the square. We are back to tell the ruling class that we have not forgotten about it.” Among the many campaigns that took center stage during the protest was one dubbed, “Resign or Hang.”

In the middle of Martyrs’ Square, symbolic gallows were hung to hold those responsible accountable for the port explosion and the rampant corruption in Lebanon. Photos of President Michel Aoun, parliament Speaker Nabih Berri, Prime Minister Hassan Diab, former Prime Minister Saad Hariri, Hezbollah Secretary-General Hassan Nasrallah and President of the Progressive Socialist Party Walid Jumblatt, among other political figures, were hung from the ropes.

As soon as the protesters who flooded to the squares around 4 p.m. arrived, the security forces who were massively deployed with the army met them with force. Tear gas grenades and rubber bullets were hurled at the protesters.

Some protesters tried to raid the parliament building in downtown Beirut, and violent clashes erupted with the security forces.

The Lebanese Red Cross tweeted that the protest in Beirut wounded 238 people, 63 of whom were transferred to hospitals in the area, while 175 received treatment elsewhere. The Internal Security Forces confirmed that one of their members was killed in the clashes.

Notably, there was no internet connection or cellphone network in the square most of the time. It is unclear as to why, but some considered this an attempt to prevent broadcasting the image of the massive crowds in the squares.

Abbas Srour, an attorney who participates in the popular protests, told Al-Monitor, “[Saturday] we organized a series of protests in Martyrs' Square as a cry of rage to tell the world that we want to reclaim the ministries,” highlighting the mistrust that the people have toward their government and the whole political system.

In a statement addressed to the Lebanese people from the government on Sunday, Diab had stated, “The country is experiencing the aftermath of a huge disaster that has left a devastating impact. The port of Beirut disaster resulted from deep-seated corruption and yearslong mismanagement. I am ready to handle the government’s responsibility for two months until political parties reach an agreement.” He expressed his intention to propose an early election bill to the Cabinet, as “Lebanon cannot rise from the current crisis without early parliamentary elections. The investigation of the Beirut port tragedy will not take long.”

According to the Lawyers’ Committee to Defend Protesters in Lebanon, which includes a group of Lebanese lawyers and legal experts volunteering to defend protesters during the October 2019 revolution, 20 people at least were arrested during the Aug. 8 protest and underwent drug tests. The committee objected to this measure, as it violates the privacy of protesters and constitutes a desperate attempt from the government to doubt the authenticity of people’s rage. The committee called for releasing those people immediately.

Heidar noted, “I don’t think anything will appease the streets before taking their revenge. New, well-studied, violent and organized protests are being arranged. Many revolution groups called on people to remain in the streets. Daytime hours will have precarious calm because most of the youths work in the relief efforts, but various acts can be expected any minute.”

Srour said, “The protests will continue in the next days, and they will be qualitative and new. We will stage them as rebels only without any other titles to make them stronger.”

Against the background of the Beirut port explosion, ministers and members of parliament had resigned Aug. 8-9, coinciding with the presence of the protesters in the square who returned to Beirut in the wake of clashes that left dozens of people injured Aug. 8.

Hashem Adnan, a political activist in political and social change movement  LiHaqqi Group, told Al-Monitor, “These resignations show the fragility of the regime at the current stage and how difficult it is to reproduce itself — after Oct. 17 and after the monetary collapse, and the economic crisis and the explosion of the port.”

Adnan added, "These resignations are details. What is important are the popular movements, their organization and resistance. The wager today is that we will be able to advance and take actual steps to change the entire system."