The Lebanese people, already reeling under tough economic, social and political conditions, face another public health crisis after the explosion on Aug. 4 in Beirut. 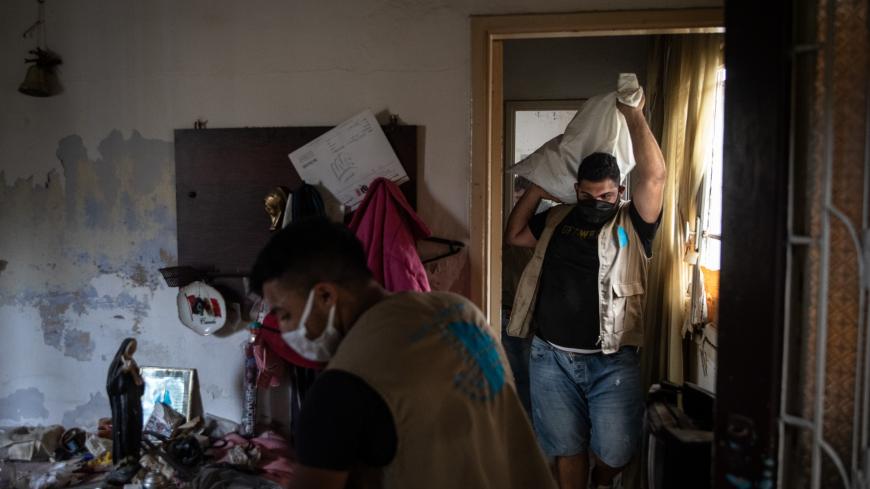 Volunteers from a local church association help to clear debris from the damaged home of a 70-year-old resident on Aug. 19, 2020 in Beirut, Lebanon. There has been little visible support from government agencies to help residents clear debris and help the displaced, although scores of volunteers from around Lebanon have descended on the city to help clean. - Photo by Chris McGrath/Getty Images 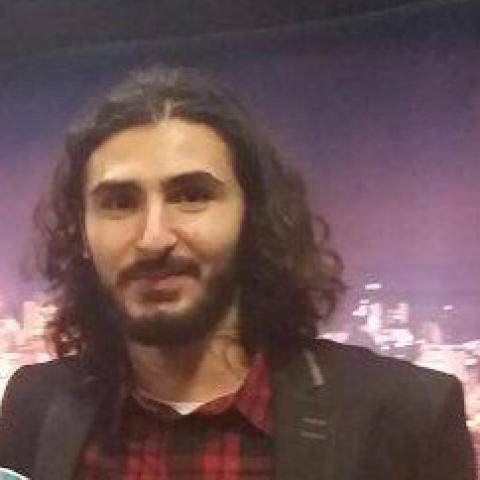 On Aug. 4, Diana Saccal, 55, was alone doing some chores at her house in Hamra, located 3½ kilometers (2 miles) from the port of Beirut. When the explosion took place, the ceiling collapsed onto her head and glass shattered into her face.

“I didn’t understand what was going on and even though I was fully covered in blood, all I could think about was my daughter Lynn, who went out that evening,” Saccal told Al-Monitor. The worst sight was on her way to the hospital when she realized the extent of the damage to buildings and streets, and the innumerable wounded bodies. “It was like a zombie apocalypse horror movie.”

Saccal said that since the explosion, she is constantly scared in her own house, mostly when she sits by the windows. “The smallest sound makes us frightened now,” says her 24-year old daughter, Lynn Zein, who saw her mother covered with blood. She said she is not getting enough sleep.

The number of people who died in Beirut’s massive explosion is 178, with an estimated 6,000 people injured and at least 30 missing, the United Nations said Aug. 14. The numbers are still increasing. Experts say the blast is one of the largest non-nuclear explosions in recent history; it is believed to have been accidentally caused by a stockpile of 2,750 tons of ammonium nitrate stored at the port.

Rawane Chanouha, a 26-year-old software engineer, was in her office in downtown Beirut when she heard the initial, smaller explosion. She and all her colleagues got under the office tables, assuming that heightened tensions between Israel and Hezbollah had led to an Israeli airstrike. Because of their quick reaction, they were all protected — at least physically — when the larger second explosion tore the city into shreds. But the mental anguish has proven more difficult to escape.

“I’m constantly paranoid while at home, fearing the windows might break again,” Chanouha said. “My parents get worried every time I go out because with the uncertainty that we are living, what if another explosion took place?”

Chanouha said she and a lot of her friends now have little hope for their future. These feelings are exacerbated by the lack of accountability from the political elite.

On Aug. 17, the head of Lebanon’s customs authority was arrested after being questioned about the massive explosion, but this is not enough for the majority of people.

Rabih el-Chammay, the director of Lebanon’s National Mental Health Program, told Al-Monitor that the catastrophe is bigger than anyone could handle. Reactions such as constant fear and worry are very normal after such an intense collective experience, Chammay said. He said that even before the explosion, Lebanon’s difficult economic predicament alone could increase mental illnesses in any country. Months of COVID-19 restrictions on movement have exacerbated the despair; Lebanon is set to undergo  a two-week full lockdown starting Aug. 21 to stem the spike in coronavirus cases in the country.

“The first step toward supporting the victims is to help them in a practical manner such as making sure they are getting the food they need and helping them repair their houses. All the while, we have to listen to them and make professional help accessible should they need it,” said Chammay.

Nehna Haddak (We Are with You) — an initiative that started with Lebanese University psychology professors and students during the coronavirus pandemic with the goal of providing mental support — is now participating in a volunteer effort that focuses on helping the victims of the explosion. “You can’t start giving people mental support without making sure they are getting basic help,” said Nancy Jdid, a 24-year-old psychology graduate and team leader at Nehna Haddak. “You also have to know how to talk to families while helping them when they are in constant fear. Oftentimes they have lost a family member in the explosion or are missing one.”

Zahraa Qays, 25, another volunteer from Nehna Haddak, told Al-Monitor that there are reactions the team will never forget, such as those of a 19-year-old girl who put her hands on her ears while talking because she could still hear noises in her head.

The most frightened and violent reactions, Qays said, came from children. “There were kids who would refuse to talk to me and would shout at me to leave, but then when I manage to calm them down, they would explain to me how scary the experience was.”

“Children have a different way of processing things. One of those is throwing a tantrum. We should explain to them what happened in a simple, non-scary way and make it clear that the event would not occur again,” Chammay said.

As for Lebanon’s older generation, which lived through the horrors of the 1975-1990 civil war, their reactions are different. Johny Mezher, a 68-year-old Beirut resident, said that during the explosion he was not scared; this is nothing new for him. “Our generation survived a violent war and this explosion is only part of it,” Mezher told Al-Monitor. But even he admits that some loud noises now get him frightened.

Chammay said that most people experiencing distress related to the explosion will recover with proper support; however, one should not underestimate the number of people who will develop mental disorders and will need mental health services in the months and years to come.

Mass violent protests have followed the Beirut explosion, where mock gallows have been set up and there have been calls for revenge against the ruling class held responsible for the explosion. Signs read, “Here is where the nooses should be hung.”

Asked if angry protests calling for violence against the political class are a normal reaction to such an event, Chammay said, “Anger in these circumstances is very normal, especially since this catastrophe could have been avoided, so it is not up to me or anyone to dictate how people should behave after such a tragedy.”