Although the Lebanese government has unveiled a set of reforms to calm popular protests, it appears unlikely the proposal will satisfy demonstrators' demands. 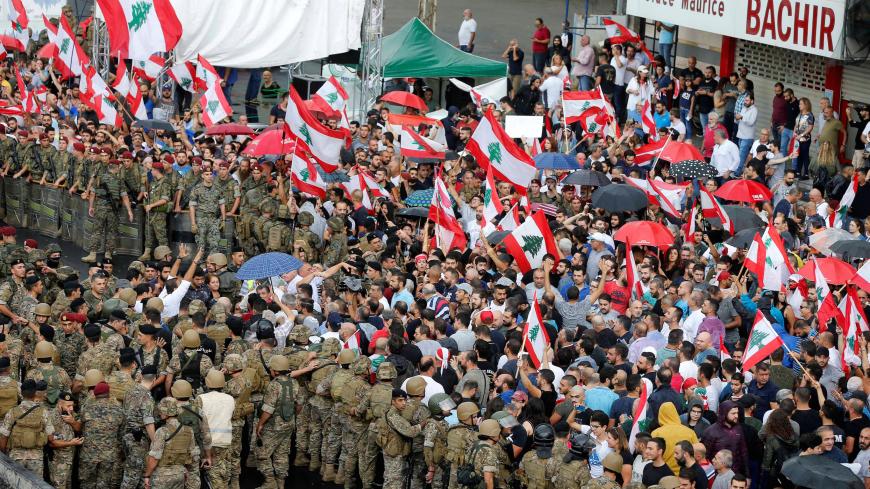 On Oct. 21, Lebanese Prime Minister Saad Hariri unveiled a set of reforms and a new government budget for 2020 in a televised address to the Lebanese public, which have been staging some of the largest demonstrations the country has seen in decades. The speech came shortly before the 72-hour deadline Hariri had set for himself and his Cabinet to pass much-needed economic and fiscal measures, and included cuts to ministers’ salaries, several billion dollars in revenue from banks to reduce the budget deficit, and the passage of laws to return embezzled funds to the public, among others.

Hariri’s Cabinet approved the reforms the same day, and also approved a budget for 2020 that reportedly cuts Lebanon’s deficit down to 0.6% of gross domestic product. But despite the reportedly ambitious nature of the Cabinet’s measures, demonstrators across Lebanon have refused to accept them, and various countrywide protest movements came together on Oct. 22 and 23 to put forward a unified list of demands that call for the resignation of the entire government along with early elections.

The continuing mass demonstrations have received backing from the Lebanese Forces, A Christian party that announced its resignation from the Cabinet on Oct. 19; other parties continue to negotiate with top leaders. As Hariri has scrambled to gain support for the new measures from political parties and financial institutions, analysts and protesters alike are saying the moves are too limited and have arrived far too late.

Hours after Hariri’s remarks on Oct. 21, demonstrators gathered below the Grand Serail, the prime minister’s offices, made it clear they were deeply unimpressed.

“We needed reforms for the past 30 years and we’ve had nothing,” Murad Aamoud, a demonstrator looking for work after completing his master’s degree, told Al-Monitor. “So these reforms are just a cry for help.”

“This is all just words. It’s very easy to say words,” another protester, Mohammad Ali Jaber, told Al-Monitor. “We have no more loyalty for any human being in this government. We’re staying here until they go down, and we elect new people from [the popular movement] and build a new country.”

Lebanese President Michel Aoun is to address the nation Oct. 24, while Hariri has met with various parties, groups and individuals to discuss the implications of the nearly weeklong protests and the implementation of his Cabinet’s reforms, according to the prime minister’s press office. Hariri has spoken with Central Bank Governor Riad Salameh, the Association of Banks in Lebanon and a number of ministers and parties about putting the measures he announced into practice this week. Among the groups he met with was a delegation from the Progressive Socialist Party, which does not support the reforms as they stand but still agreed to them.

Progressive Socialist Party spokesperson Rami Rayees told Al-Monitor that the party has “tried to push toward more genuine reforms and our party has proposed a full package of reforms before the Cabinet. Unfortunately, we have not succeeded in pushing the other Cabinet members to support our requests.”

Rayees voiced concerns that the party had about the privatization of the telecommunications sector, which was among the measures Hariri’s Cabinet approved, and advocated for the removal of Foreign Minister Gebran Bassil, the head of the Free Patriotic Movement, as part of a proposed Cabinet reshuffle.

Parliament Speaker Nabih Berri, who heads the Hezbollah-aligned Amal Movement, said the speedy implementation of the reforms was of paramount importance, Al-Jadeed reported.

Member of parliament Alain Aoun, a member of the Free Patriotic Movement, told Al-Monitor that he hopes the reforms will win back public trust, and that the implementation process needs time to be effective. Yet Aoun had no illusions about the measures’ support.

“It’s clear that the protesters didn’t agree, they think this is not enough,” Aoun said, adding that financially, it is important to consider how the International Monetary Fund, the World Bank and Lebanon’s donors would react to the reforms.

The International Support Group for Lebanon, which includes representatives from the United States, the European Union, China, Russia and other countries, announced its support for Hariri’s reforms Oct. 22.

Aoun told Al-Monitor that the issue of the government resigning has been considered by top leaders, but support for it has fluctuated.

Among leaders opposed to the current government entirely is former Labor Minister Camille Abousleiman of the Lebanese Forces, who told Al-Monitor that he considered his resignation to now be official. He said he and his party are not focusing on the substance of the reforms, but rather on pushing for a full and total resignation of the Cabinet.

Over the course of the days following Hariri’s announcement, the size of protests in cities like Tripoli continued to grow, and concrete efforts took place in Beirut to compile demonstrators’ demands and create structures within the broad and largely leaderless nationwide protest movement. On Oct. 22, according to the Lebanese newspaper L’Orient Le Jour, several organizations created a revolution coordination body composed of several dozen groups from across Lebanon, including the civil society-oriented Sabaa Party.

Ghada Eid, the secretary-general of Sabaa, sent Al-Monitor a list of demands declared in Martyrs’ Square in Beirut on Oct. 22 by retired Brig. Gen. George Nader, a leader in the Retired Military Movement, which is one of the groups that had joined the revolution coordination body. Among the demands are calls for the resignation of the entire government of Lebanon, new elections under a new electoral system to bring leaders from outside the current party system to power, the recovery of all public funds that were “looted” since the end of the civil war, “lifting the country out of the abyss that the corrupt authorities” have created and calls for protesters to remain in the street until these stipulations are met.

Standing next to a tent in Martyrs’ Square on Oct. 23 that protest groups named “The Operations Room of the Revolution,” retired Brig. Gen. Sami Rammah told Al-Monitor that while the body is by no means leading the entire protest movement, its members hope to give it a degree of organizational structure.

“We are managing the revolution,” Rammah said. “This is a coordination group for the entire movement.”

Rammah added that the members of the Retired Military Movement are demonstrating partly because of cuts to military salaries and benefits, but also to stand by low-income Lebanese people as they protest for better living conditions. Rammah said the body will create subcommittees to manage certain aspects of the protests, including logistics and security, on Oct. 24. However, as of Oct. 23, it remains unclear how much coordination truly exists between the body and other protest groups, as several appear to still be functioning independently.

Simon Neaime, a professor and former economics department chair at the American University of Beirut, said that while the reforms are generally positive ones, they have come far too late and are divorced from the political reality. “The problem is that what is happening on the ground is something, and the political spectrum in Lebanon is somewhere else,” he told Al-Monitor.

Neaime said the kind of reforms currently needed are much more radical than the ones Hariri has proposed, and that if they are not taken, the financial system in Lebanon may be prone to collapse.

If the popular movements across Lebanese cities and the divisions among parties are any indication, a serious consideration of the Cabinet’s reforms remains unlikely. As protesters continue to organize and push for much more fundamental changes to the Lebanese economic and political system, leaders may soon be forced to reckon with the difficult choices protesters are presenting them. The president’s address to the nation will also provide a further decisive moment to the newly united Lebanese street. At this point, all bets are off.