Lebanese protesters have kept up demonstrations, including blocking roads, after the president called on demonstrators to return home. 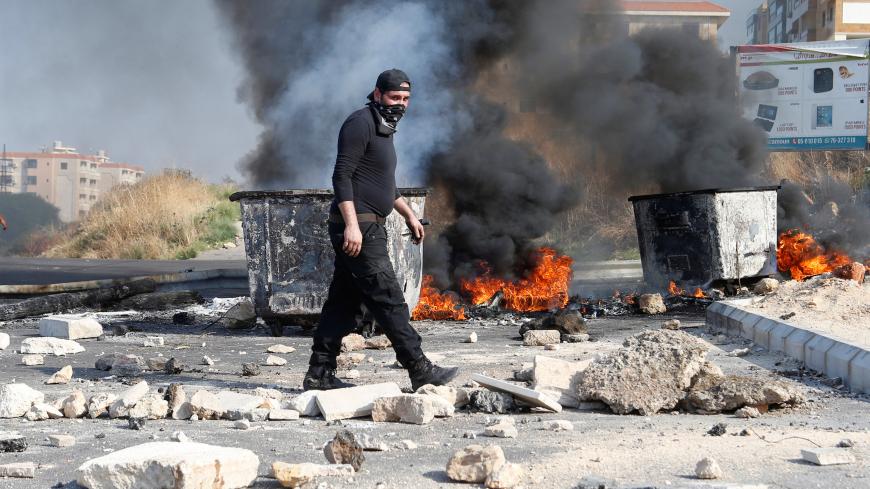 After nearly 3½ weeks of nationwide protests demanding an end to corruption, a new technocratic government and an improved socioeconomic situation in Lebanon, President Michel Aoun told the nation in a televised address Nov. 12 that Lebanon will descend into a "catastrophe" if protesters do not return home and allow Lebanon to work normally again.

Protesters, however, took to the country’s streets soon afterward, blocking roads with burning tires in various parts of Lebanon and marched toward the president’s Baabda Palace on Nov. 13. Security forces blocked demonstrators from reaching their destination, and closed the highway leading to the president’s residence.

The renewed demonstrations have already seen one man near Beirut get shot by a soldier, and a man in Jal el-Dib fired a gun in the direction of protesters, who were also reportedly met by residents who arrived with knives and sticks. Both the soldier and the man with the weapon in Jal el-Dib were reported to have been arrested, and protests are continuing.

Yet behind the backdrop of these political events, the crises facing the Lebanese people have remained unresolved, and have continued to fuel public anger at the country’s leaders. Amid gasoline shortages, limits on cash withdrawals at banks and threats to salaries and many critical imported goods, workers from a variety of industries in Lebanon had gone on strike prior to Aoun’s speech to protest a wide swath of issues related to the continuing economic crisis.

Even as there were projections of calm from Central Bank Governor Riad Salameh on Nov. 11 and claims from Aoun and other officials that the roadblocks set up by protesters were worsening the country’s woes, analysts and demonstrators continued to blame the country’s political class for the deteriorating economic situation, warning of a total collapse if serious action is not taken soon to create a capable new Cabinet that would implement a wide-ranging recovery plan.

“At a time when we’re facing a massive economic and financial crisis, a real confidence crisis, the political elite still have no sense of emergency,” Maha Yahya, the director of the Carnegie Middle East Center in Beirut, told Al-Monitor. “They’re going about their back-door prostrating to form a government.”

According to the World Bank, the crisis has become severe enough that Lebanon may already be in a recession.

Wadih Akl, a member of the political bureau of Aoun's Free Patriotic Movement, told Al-Monitor that Aoun’s speech reflected the president’s commitment to implementing an anti-corruption plan, which in the president’s view is the root cause of Lebanon’s economic problems.

“The president’s speech meets the requests of the people,” Akl said, adding that it was “generally comforting to the Lebanese and met directly with the civil protesters' needs.”

Many people, however, said the speech didn’t meet their expectations; following the president’s speech, protesters returned to the streets in droves to express their dissatisfaction with his address.

Earlier in the day, strikes took place as employees from Alfa and Touch, Lebanon’s two state-owned mobile network providers, demanded salary guarantees, and bank employees left work to protest after some workers were exposed to violent threats after bank branches limited the amounts of money consumers could withdraw. A general strike called for Nov. 12 also included roadblocks across the country, and marches by students to state institutions after schools had been closed.

Castro Abdallah, the president of the National Federation of Employees’ and Workers’ Trade Unions in Lebanon, told Al-Monitor the day of actions had been a success, and would continue.

“We today, with great energy, in the street with the majority section of the society, the students, the employees of banks, hand in hand with workers, are striking and this is something positive for our interests,” Abdallah said. He denounced politicians for failing to abide by protesters’ demands.

Numerous gas stations had been closed across Lebanon due to gasoline shortages in the days prior to the strikes, stemming from a lack of access to dollars to pay for imports. Dollars had remained limited by banks after they reopened following a period of closure during the protests, compounding a crisis that had been building for months as the Lebanese pound steadily lost value against the dollar on the black market. Because Lebanon is a majority-import country, according to analysts Al-Monitor spoke with, measures Lebanese banks have taken such as reducing lines of credit have already caused price hikes and salary cuts in Lebanon’s private sector. As a result, some Lebanese have reportedly started stockpiling food.

By Nov. 12, many gas stations had resumed operations in Beirut. But Yasser Jawhari, a protester originally from Baalbek, told Al-Monitor that while in the capital the general situation appeared to be stable, things were much worse in the Bekaa Valley. He added that hospitals in the region were in poor condition, even as many people in the region were in need of medication and other necessities.

As a result of a backlog in state payments to hospitals and further issues brought about by the banking crisis, the Syndicate of Private Hospitals announced that medical workers would go on strike as well Nov. 15 if no measures are taken. The syndicate’s leader said the government had not paid private hospitals in full since 2011, and that a “catastrophe” may soon ensue.

“Since banks don’t have a lot of dollars to give, all the products we buy from abroad, dialysis filters, or heart stents, we have to pay in dollars,” said George Flouty, a medical auditor at a private hospital. “So if we don’t get dollars from here to a month, the supply of the whole country will disappear.”

Flouty told Al-Monitor that hospitals are continuing to use the same billing procedures used in 1992 even though prices have changed since then, leading to fewer investors and worse conditions in medical facilities. He also poured cold water on claims by Health Minister Jamil Jabak that roadblocks and protests were causing medical shortages at pharmacies and medical centers. Flouty said that getting rid of sectarian hiring practices — something the Lebanese revolution has demanded from the entire state — would help alleviate strains on insurance and financing in Lebanon’s medical field.

Aside from caretaker Prime Minister Saad Hariri’s reform package released last month, proposed solutions from authorities for the deep well of problems facing Lebanon have been few. On Nov. 11, Salameh refused to formally implement capital controls — even though analysts said they in effect are already being implemented — and said he would seek to lower interest rates through liquidity management.

“These fixes are not real fixes,” Sami Nader, the head of the Levant Institute for Strategic Affairs, told Al-Monitor. “They are not addressing the real problem yet because there is no credible government capable of implementing reforms. The source of the bleeding is still there.”

In his speech, Aoun said he might begin formal consultations on naming a new prime minister later in the week, but also said they may be delayed further.

Due to the exceptional circumstances in Lebanon, a number of lawyers, economists, political scientists and other experts released an emergency economic rescue plan that calls for a host of measures, including capital controls, fiscal changes aimed at fighting corruption and an equitable debt-reduction strategy. Yahya, who was among those who authored the plan, said the lack of urgency to address the crises and the potential consequences of politicians’ lack of action were what spurred her to take action.

Yahya said that according to one World Bank simulation, if devaluation continues to even slightly higher levels, Lebanon might see “50% of the population falling below the poverty line.”

Nader said that such a shift could cause a change in the protest movement, perhaps leading to an escalation in Lebanon’s revolution. Despite both the existing and looming threats to Lebanese society, the confluence of crises has not yet caused the revolution to unravel, even amid the rising tensions following Aoun’s address. But the longer it takes for decisive action to address them, the more likely it is that the Lebanese will lose whatever patience they still have left.