Residents in the Kurdish-controlled areas in Syria are criticizing the autonomous administration’s lockdown measures to contain the spread of the coronavirus, in the absence of alternative sources of income. 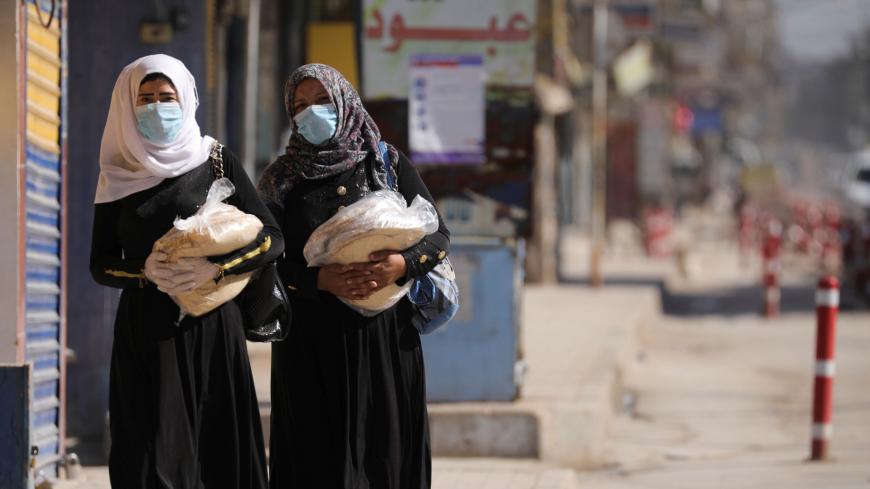 Women hold stacks of bread as they walk along an empty street after restrictions are imposed to prevent the spread of the coronavirus in Qamishli, Syria, March 23, 2020. - REUTERS/Rodi Said

Shahla Mohieddine stands in front of her courtyard in the Assyria district of Qamishli, wearing gloves and a mask she hopes will keep her safe from the coronavirus. She shows signs of bewilderment and concern as she utters a few words on her mobile phone with her husband.

As soon as she hangs up, she tells Al-Monitor’s correspondent, who is standing at a safe distance, “My children are in their room waiting for their father to bring home some vegetables and fruits. But the prices are so high that we can barely buy what we need. My husband’s income is not enough. He works at a mobile phone shop, which was shut down in compliance with the lockdown. We have no other source of income.”

The Kurdish autonomous administration in Syria has extended the coronavirus lockdown period until at least April 21. It had announced the first 15-day lockdown period March 23 in the broad swath of territory under its control. It also strictly ordered owners of shops, cafeterias, internet cafes and gyms to shut down and adhere to the directives issued by the crisis team formed to address the spread of the coronavirus in the Jazira region.

In a related move, the autonomous administration also exempted residents from paying water, electricity and sanitation bills for May and June. But some of the residents with limited income viewed this step as insignificant, given these bills’ trivial amount. Also, the General Administration for Supply and Consumer Protection — which is a department of the autonomous administration — approved a list of fixed prices for goods, in light of a recent price surge after the curfew was implemented.

Yet the price list stirred confusion and anger among some retail merchants and traders. Wholesale trader Ali Awad, a pseudonym, told Al-Monitor, “Most imported goods from any region are sold at high prices from the source suppliers, not to mention the customs duties we pay for the autonomous administration and the Syrian government checkpoints, in addition to the loading, unloading and shipping commissions that we also bear.”

He explained that the prices set by the General Administration for Supply and Consumer Protection are lower than the prices charged at the country of origin. “Do they want us to bear the difference ourselves?” he asked.

A source from the General Administration for Supply and Consumer Protection told Al-Monitor, “We set prices after studying the price of the food items at the source markets.”

On March 29, the Executive Council of the autonomous administration announced food baskets would be distributed to needy families in the area during the lockdown to curb the spread of the coronavirus. However, the council didn't say how much aid would be available or when it would be distributed. Some baskets were handed out April 9 to low-income people by the administration's Office of Humanitarian Organizations Affairs in Al-Malikiyah (Derek).

Al-Monitor contacted some activists, journalists and low-income residents by phone. Gandhi Saadu, a resident of Qamishli — which is about 60 miles from Al-Malikiyah — said he was unaware of any measure to help the poor. “Are there really practical steps being taken by the autonomous administration? I only heard some rumors about food items being distributed to all those in need,” he told Al-Monitor.

“The exemption from paying water, electricity and service taxes is a bit confusing. Such a measure doesn't rise to the level of procedures that protect or help the poor. This is all the more true since a family needs $400 a month to live decently amid exorbitant prices and soaring unemployment and poverty rates in our areas. These decisions cannot protect the poor," said Saadu.

He lamented the autonomous administration’s decision-making process regarding the coronavirus pandemic. “It seems that decisions and measures are taken arbitrarily and without any prior study or any strategic planning. There is no awareness of the difficult economic situation and living conditions of the population amid a lack of medical, health and economic planning," he said.

Saadu added, "The decisions taken so far have caused complete paralysis of various aspects of life without any coordination or networking between the different autonomous administration bodies, security institutions, medical and services agencies, and civil organizations. All measures taken to this date are mere security actions by the Kurdish security police (Asayish). Most of the procedures are implemented by the Asayish and then the municipalities, and this is a fatal mistake."

Journalist Sulafa Younes from Amuda also criticized what she sees as the administration’s lack of seriousness in controlling purchase and sales operations, which causes societal problems.

She told Al-Monitor, “The autonomous administration’s services and preventive measures are good, but shop owners do not adhere to the fixed prices set by the General Administration for Supply and Consumer Protection. Prices vary from one place to another.”

She pointed to a surge in meat prices. For example, the cost of veal and lamb recently rose by about 20%.

“The majority of the population, earning a low income or daily salary, can't buy meat at such a high price,” she said, adding, “Merchants always claim [they must buy] at a high price from their suppliers, who in turn blame the source supplier for setting high prices. Meanwhile, the General Administration for Supply and Consumer Protection insists on its fixed prices lists. The consumer ends up being the victim.”

Younes called on the administration to reconsider any decision that does not serve the poor. “Most breadwinners have lost their source of livelihood. We urge you to provide them with maximum aid so they can withstand the current difficult circumstances," she said.

Amer Ali from the city of al-Qahtaniyah (Tirbespi) is a construction worker living on a daily salary. He told Al-Monitor, “I haven't worked for almost 20 days now. I need at least $300 a month for household expenses." In addition, he has monthly bills for various utilities, a landline, and cell phone and internet service.

“The autonomous administration says it exempted citizens from paying for some services, which do not exceed $3 for two months. I say this exemption is meaningless. Also, the distribution of food baskets is not enough. The administration ought to give out checks to cover our fixed expenses,” Ali said. He further pointed to the additional financial burden borne by families with sick members.

Between adhering to safety measures and meeting the needs of families with limited incomes, the Kurdish region — which has had no development plans in recent years — seems to be heading toward even more hardship. 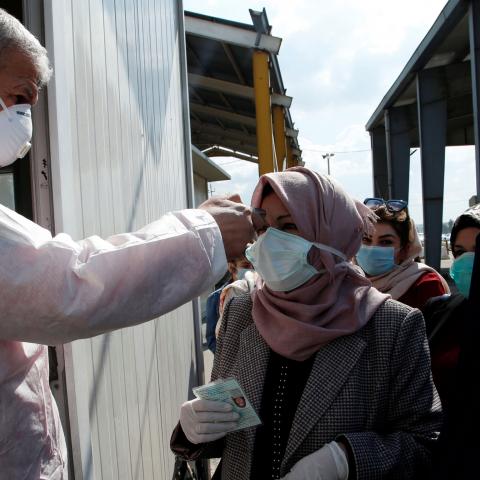