The depreciation of the Syrian pound is so bad that Qamishli residents are struggling to buy basic goods, when available, and is forcing some to leave in search of financial stability. 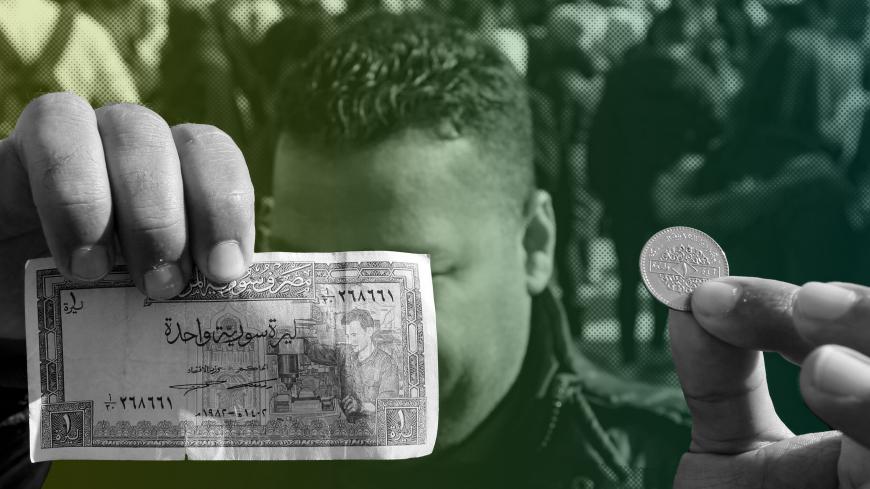 Inhabitants of Qamishli in Syrian Kurdistan have been struggling with poverty and the inability to buy basic provisions due to the high cost of living and extreme depreciation of the Syrian pound. In late November, the exchange rate began to exceed 1,000 pounds to the dollar. The cost of buying and shipping foodstuffs and merchandise from Damascus and Iraqi Kurdistan has increased 35% to 45% according to merchants in the area.

Bakhtiar Rasoul, a wholesale cosmetics trader, told Al-Monitor, “Sales have dropped by more than half, and purchases are now limited to foodstuffs. Other professions — such as those involving cosmetics, clothing and men's and women's accessories — are no longer as popular as they once were.”

Rasoul emphasized, “It is true we are merchants, but at the end of the day, we are citizens buying the remaining food and clothing, and we are also suffering losses due to the increasing price [and thus lower sales] of goods we sell to make ends meet.”

Jamil al-Sayyed, who owns a money exchange office in Qamishli, told Al-Monitor, “People no longer spend a lot in foreign currency, and they just limit their outlays to their needs. The rise and fall of the pound against the dollar has hit purchasing power in the markets hard.... Sales in the food sector have remained active because people need to eat, but they dropped to less than half [the amount sold] before the pound depreciated. I have been watching the market [from my shop], and sometimes, you find the businesses empty and slow. Big traders with lots of capital and large foreign currency balances are not affected. Only people who get paid in pounds are struggling.”

Khaled Amin, a trader who requested that his location not be disclosed, told Al-Monitor that the pound's fluctuation and the extent of its collapse against the dollar has weakened residents' ability to survive to the point of a humanitarian disaster. He said that from his experience the pound has dropped twentyfold compared with its value before the Syrian civil war broke out.

“The crisis has taken its toll on everyone,” said Amin. “Buyers and sellers are equally suffering. Citizens cannot manage without help from their relatives who sought refuge in other countries. The Syrian government in Damascus increased employees’ [monthly] salaries by $20 [in November] to counter the economic sanctions imposed on them. Syrian citizens are the ones suffering the most. The [Kurdistan] self-rule administration also increased employees’ salaries [by about 35%].”

Government employees and workers are the most affected by the financial crisis resulting from the Syrian war, as their salaries remain in pounds. The average monthly salary of self-rule administration employees is 80,000 pounds ($65), while salaries of Syrian government employees do not exceed 60,000 pounds ($45). The increasing price of cement and reinforcement steel have also led to fewer opportunities for manual labor as the construction sector slows.

Hassan Taher, an economics expert who declined to identify his employer for security reasons, cited the many factors that have led to the current economic crisis, including decreases in production, gross domestic product and per capita income; halted exports and fewer imports; the regional and international siege on the Syrian economy; and the state’s inability to collect taxes and fees.

“Tourism also suffered, due to the security situation,” Taher remarked. “Everything that increased revenue to the state treasury stopped. This directly affected the foreign currency reserves and the gold reserves at the Central Bank of Syria. The bank had played the role of controller and tracker of the dollar's movement in markets and the pumping [into] or buying of dollars in markets. It created balance between the dollar supply and demand. With the absence of the role of the Central Bank, however, ... demand for dollars has increased, while the pound continues to depreciate.”

“The depreciation of the pound ... is affecting the consumer, whose purchasing power is dwindling,” Taher continued. “As a result, poverty is on the rise, as income is paid in pounds, and the prices of products are high. Only when political and security stability are achieved can the situation be resolved. Without that, there will be no economic growth.”

Hasaka resident Samira Umm Joan told Al-Monitor, “The poor are the ones paying the price of the international economic sanctions imposed on Syria. I can't help my only son get married. A gram of gold costs around 50,000 pounds [$40-$50], not to mention the high wedding expenses. We worry about how to make ends meet on a daily basis. My daughter is an agricultural engineering student at Al-Furat University in Hasaka. She needs 40,000 pounds [$30-$40] daily for transportation and personal allowance, not to mention the cost of lectures and [supplies]. My husband makes 80,000 pounds [$70-$80]. If it weren’t for my brother-in-law who works in Iraqi Kurdistan and sends us $100 per month, I don't know how we would have made it. Perhaps it is time to run away and emigrate for good.”

At the Semalka crossing on the border with Iraqi Kurdistan, Al-Monitor met a young man who asked to be called “the poor guy.” He was leaving for Iraqi Kurdistan for transit onward to Europe.

“I have residency in Erbil,” he said. “I will leave the country for good. Life here has become intolerable. Poverty is eating us up, and nobody cares. A country where I cannot support my family and myself will remain strange to me. Migration is the best option given the circumstances. I worked at a private company in Dayrik/al-Malikiyah and earned 100,000 pounds [$90-$100] monthly before I resigned. But my savings will run out in a few days, and I won't be able to support my family of four. For the rest of the month, we wait for help from donors or anyone. I will not regret leaving.”