Amid a staggering rise in the US dollar exchange rate and Turkey's control of Serekaniye and Kari Sapi, Kurds find it hard to feel the joy of this year’s Christmas and New Year’s festivities. 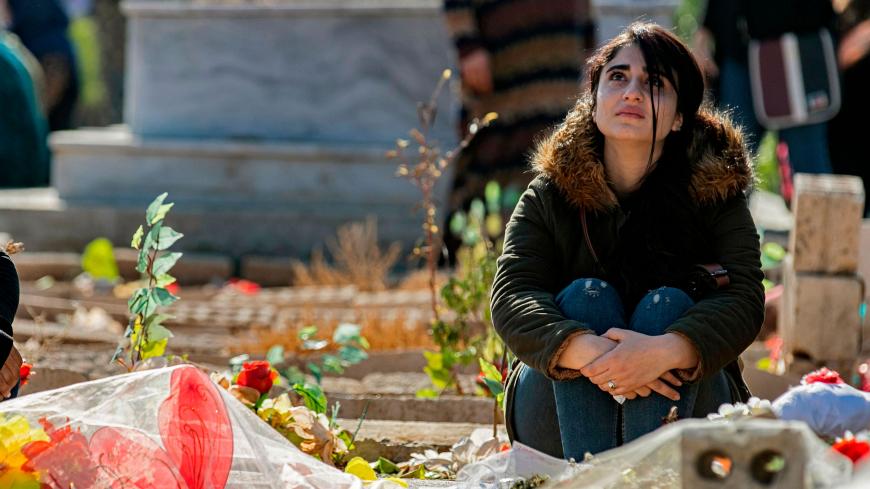 A woman sits next to a grave in the Kurdish-majority city of Qamishli, Syria, Nov. 20, 2019. - DELIL SOULEIMAN/AFP via Getty Images

QAMISHLI, Syria — Hassan Taher, a Kurdish academic who works at a grain company, breathes heavily while telling Al-Monitor about the living situation of citizens in Qamishli.

“This year [2019] has been full of sorrow and tragedies. Our areas have been plagued with killings, homelessness and missiles. Many families have been displaced or have lost their shelters. My daughter, her husband and children were our neighbors. Due to the war, they left for Kurdistan. I miss my grandchildren Asha and Mohammad a lot,” says Taher.

He adds, “It has been a year of poverty and deprivation. Every house has members displaced or sick, a deceased person or tells a sad story. Spinsterhood has soared due to the displacement of youths or their refraining from marriage. The financial situation is tough, as thousands of agricultural hectares (acres) have been burned and financial resources are scarce.”

“All this has affected people’s morale and conduct with each other. The situation killed our ambitions. People’s displacement from Serekaniye, Afrin and Kari Sapi and the threats to Kurds have prevented us from being happy. Joy has no place in our hearts, as long as children’s cries fill refugee camps. We must not give up and we must find a ray of hope, but our strength has been drained,” Taher says.

Siban Ali, 31, spreads his merchandise in front of his clothing store for children and women. He tells Al-Monitor, “Sadness is everywhere. The war has not ended, and people cannot even satisfy their basic daily needs. How can they buy clothes and products for the New Year? Some are visiting the markets, but they cannot buy anything due to high prices.”

The Syrian pound has been increasingly depreciating against the US dollar, thus burdening Syrian citizens even more, especially the poor and employees who get paid in Syrian pounds.

Ayman, 37, walks around the markets along with his wife and three daughters. The teacher tells Al-Monitor, “My salary as a public school teacher is 52,000 Syrian pounds, and my wife’s salary at the self-rule administration schools is 100,000 Syrian pounds. We barely earn $150 together. We have been walking around the markets for two days, and the prices are so high. We cannot afford new clothes for the kids. My little children wanted a Christmas tree with ornaments. But the smallest costs $50. Christmas Eve preparations also cost no less than $80-$100. We cannot spend our salaries on food only.”

Hussein Salo, owner of a men’s shoe store, stands in front of his store calling on passers-by to enter. He tells Al-Monitor, “Honestly, we do not have new merchandise because of lack of security and wholesale traders’ fear of another attack on Serekaniye and Kari Sapi launched by the Free Syrian Army’s national army and supported by Turkish forces.”

A video posted online Dec. 10 showed the deployment of national army factions in the Kurdish city of Serekaniye.

“The cost of shipping merchandise from Damascus and Aleppo is high. The rise of the dollar affects buying products, and it consequently affects the buyer. Preparations this year do not resemble last year due to the tough living circumstances imposing themselves on festivities. Besides, there is constant fear of another security breach and explosions," says Salo.

Al-Monitor met with Ahmad Karimi, 61, who displayed sweets and different kinds of food and citrus fruits in front of his shop in the central market in Qamishli.

“This has been a very bad year. Last year on this day, we had sold more than half of the goods,” he says, adding, “It deeply hurts me to see the children watching the sweets that their parents cannot afford. Sometimes we offer some for free for children, but no one seems to be feeling the joy and happiness in welcoming a new year. It is only a matter of days before the current year ends. I don’t think the festivities this year will be similar to those in previous years amid the poor purchasing power."

Al-Monitor met beauty expert Orkina Sumi in the predominantly Christian neighborhood of Al-Wosta. She works in the makeup section at a hair and beauty spa. “I am in daily contact with women who talk about their concerns. They share the same sorrow and fear of bombings. They are mostly concerned about not feeling the joy of celebrating Christmas, the market’s stagnation and the high cost of living.”

Sumi adds, “Usually, women and young girls would come for a facial, tattoo or makeup before the holidays, but this year few are coming amid the difficult living conditions and the prevailing sadness due to the Turkish war on the region.”

Appealing to God, she asks for peace across Syria. “May families meet their abandoned children and the economic situation be revived,” she says.

For 42-year-old Umm Khaled (a pseudonym), returning home to Serekaniye is the only thing she wishes for in 2020. She says, “The greatest celebration will be my children who left for Kurdistan and Austria to come back home so that we can meet again.”

Perfume and cosmetics dealer Bakhtiyar Rasoul, 50, tells Al-Monitor, “Expatriates would come to spend Christmas Eve in their city of Qamishli. Families would reunite and fireworks would light the city’s sky. Most families would gather around dinner.”

He adds, “We felt our city was the most beautiful city in the world. Neighbors would celebrate together and share homemade sweets.”

Rasoul recalls past years and recounts how Kurds would celebrate these holidays. “Santa Claus is not part of Kurdish culture, and our children did not wait for him to visit and bring gifts. We had a special ritual. Young Kurds would go disguised from house to house wishing families a new baby, money, gifts and foods in the New Year to come.”

But according to Rasoul, there is no joy. He says, “We no longer wish for joy. Every year we say that the year before was better. This year we are experiencing a double tragedy. Listening to the displaced from Serekaniye, Afrin and Kari Sapi talking to each other in the markets, I feel the frustration of the Kurds. We have forgotten how to laugh, and this has affected our children. They no longer smile.”

Rasoul has been a retail merchant for many years in the province. “Our sales have dropped substantially. The terrifying rise in the dollar exchange rate minimized the purchasing power. People are afraid of the future. They prefer to save money instead of spending it on the celebrations,” he says.

Between the joys of Christmas, the tragedies of war, immigration and bombings, the Kurdish, Syrian, Assyrian and Arab components of the Kurdish region in Syria are left confused and in fear of the future.