The collapse of the Turkish lira paralyzed markets in Operation Euphrates Shield areas and is harming the livelihood of more than 100,000 families. 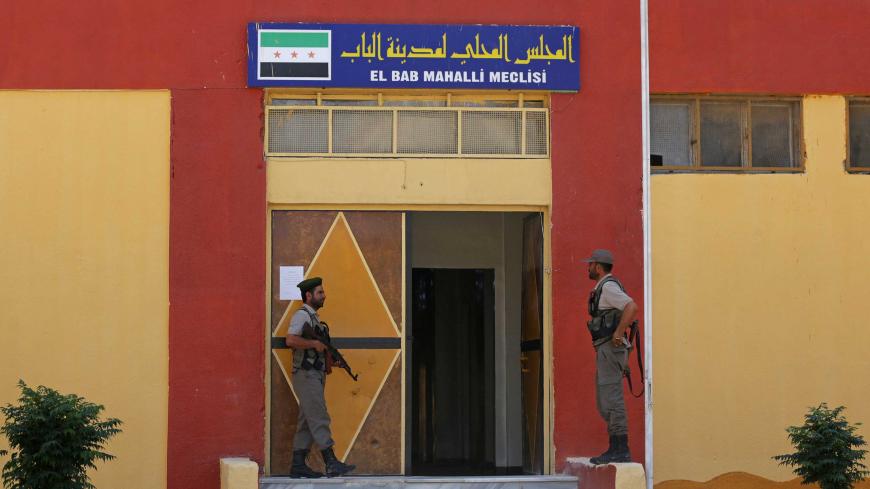 ALEPPO, Syria — The record freefall of the Turkish lira (TL) against the US dollar has added to the misfortune of the Syrian opposition in the Operation Euphrates Shield areas in the north and northeastern Aleppo countryside.

The repercussions of the depreciation were most visible in this area since a large segment of its Syrian residents are civil servants and fighters who receive their salaries in TL.

The Euphrates Shield area in the Aleppo countryside, controlled by the Free Syrian Army (FSA), is a region under Turkish influence. Turkey supports civilian and FSA institutions in this area to get them to face any attempts by the Kurdish People's Protection Units (YPG) to control the area near the Turkish southern border.

The Turkish lira traded at seven to the dollar on Aug. 10 in the city of Azaz in the Euphrates Shield area. The sinking TL registered on Aug. 23 6.07 against the dollar and became the equivalent to a mere 70 Syrian pounds (SP).

The monthly salary of Syrian employees in the Euphrates Shield area of 500 TL would be equivalent to 35,000 SP, or about $85. This petty amount is not enough to meet basic monthly needs.

The sharp decline of the TL against the US dollar comes after Washington threatened to impose economic sanctions on Turkey because of several thorny issues between the two countries, including the detention by Turkey of US pastor Andrew Brunson. Ankara accuses Brunson of espionage and terror-related crimes in Turkey.

Al-Monitor toured the opposition-controlled al-Bab markets in the countryside of Aleppo. These markets are not busy; people are only window-shopping and the residents are short of cash. Eid al-Adha holiday from Aug. 20-24 failed to revive these markets, crippled by the slump of the TL against the US dollar. The currency crisis has halved the sales of owners of clothing stores and food and furniture shops.

Fadel Mohammed, a member of the Aleppo branch of the opposition-affiliated Syndicate of Economists, told Al-Monitor, “More than 100,000 Syrian people in the Euphrates Shield area receive their salaries from the Turkish government, which supports several sectors and institutions there. Local councils, police and general security forces, [FSA] fighters, teachers, preachers and mosque staff were all affected by the sharp decline of the TL. Their salaries now barely cover their living expenses.”

He added, “Employees in FSA-affiliated institutions and councils, as well as FSA fighters in the Euphrates Shield area, receive monthly salaries ranging between 500 and 1,000 TL. With the plunge of the TL against the US dollar, their salaries are no longer enough. A five-member household now needs at least 2,000 TL to cover the cost of living. The retraction of the TL was felt by 100,000 families in the area. This is entailing a serious recession in the domestic markets and trade in the Euphrates Shield area. The Turkish government must take quick steps by increasing salaries.”

The trade movement in the Euphrates Shield area has recently been frozen due to the weakening of the TL. Al-Monitor met Abdul Rahman Hasano, who owns a small trading company in the city of Azaz that imports food from Turkey. “In the last few months, the TL shrunk against the US dollar gradually. But as of the beginning of August, the Turkish currency took a dive. During Eid al-Adha holiday, we expected a hike in sales. But on the ground, residents made no purchases as their monthly income was spent on basic needs such as bread.”

Mohammed went on, “A large number of shop owners recently closed their shops because of the volatile exchange rate. They had bought most of their goods in TL. The drop caused them heavy losses, and they were forced to raise the price of their goods. High prices repel clients. They preferred to close their shops at the present time [and wait] for better currency exchange rates.”

Najjar added, “I wish my salary would improve. It is my means of livelihood. I cannot leave. Unemployment is spread in opposition-controlled areas.”

“The only solution to our problem is for Turkey to raise our salaries to compensate for the losses ensuing from the collapse of the exchange rate,” said Jaber Osman, 44, a school teacher in al-Bab.

“My monthly salary no longer covers my household expenses. I need the double value of this salary. I have four children, and I do not know how to secure their basic needs like food and clothing. Eid al-Adha has passed, and I was not able to buy my children clothes and sweets."

Jaber receives a monthly salary of 530 TL, equivalent to 37,000 SP. This amount is currently not enough for a single young man, let alone a married man with children and various living expenses.

Perhaps there is no solution to this problem except for an increase in salaries or an improvement in the TL exchange rate against the US dollar, which for now remains unlikely.