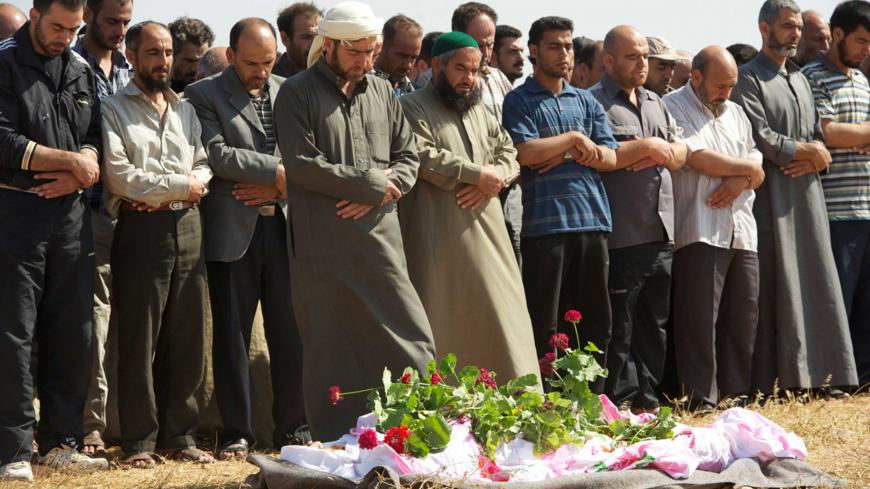 Syrian mourners pray over the body of a member of the Free Syrian Army (FSA) during his funeral in the province of Homs, Syria, June 22, 2012. - AUSTIN TICE/AFP/GettyImages

ALEPPO, Syria — The families of Free Syrian Army (FSA) fighters who died in Operation Olive Branch — which resulted in the FSA seizing Afrin in northwest Aleppo from the People's Protection Units (YPG) on March 18 — have obtained death gratuity payments from the Turkish government.

Col. Moataz Erslan, the commander of the FSA's Elite Army in Aleppo countryside, told Al-Monitor that the Turkish government dispersed payments to the families of the fallen FSA militants July 1-19. He explained, “Each bereaved family obtained 60,000 Turkish liras (about $12,500) in addition to ongoing monthly payments of $100. There are also other benefits, such as being granted Turkish citizenship, but they have yet to be implemented and are still being examined in Turkey.”

Erslan noted, “I was one of those in charge in the gratuity committee, along with some others who are Turks. The payments took place in the city of Azaz in the northern Aleppo countryside. Each of the FSA factions presented us a list of its militants killed in the battle. There were 300 FSA militants killed in Operation Olive Branch. For those who were married, their widows obtained the gratuity, and the mothers or fathers of the single ones were given the money at the distribution office in Azaz.”

He explained that the Turkish government also plans to pay the families of fallen militants in Operation Euphrates Shield, conducted by the FSA and the Turkish army against the Islamic State in the northern and eastern Aleppo countryside in 2016. He said the FSA factions involved have not yet finished counting the dead.

Al-Monitor met Abdallah Bakour, the commander of the Levant Front, who said, “There are no figures on the number of FSA militants killed in Operation Euphrates Shield. We will do the count if the Turks ask for these figures, and we really hope that their families obtain gratuities like those in Operation Olive Branch.” He emphasized, “Nothing is certain in this regard so far, and we really hope to hear the news very soon.”

The payments met with approval among the area residents, who perceived the move as appropriate to meet the needs of bereaved families — many of which are destitute.

Al-Monitor encountered Samira al-Hashem, the mother of an FSA fighter killed in Operation Olive Branch in Afrin. Hashem currently resides in Azaz city after being displaced from Aleppo city in late 2016. She received the gratuity, as she is a widow and her son was unmarried. She said, “Nothing can bring back my son Mohamed. It is a nice gesture, though. I am going to donate part of it to orphans in memory of my martyred son and use the rest to pay my rent and daily living expenses in Azaz.”

The gratuity has a godsend to single mothers who have been left alone with several small children to raise. Some of these women see the gratuity as a chance to set up businesses, as they say the monthly sum that the Turkish government has promised to pay them is barely enough to make ends meet.

Al-Monitor spoke to Nour Barakat, whose husband was killed in Operation Olive Branch in Afrin. She lives with her five children, the eldest of whom is 10, in al-Bab. She explained, “The Turkish government gave me 60,000 Turkish liras a few days ago, and those in charge promised that we will be also paid a monthly sum of about $100. I am thinking about investing the money in a small business. Perhaps my brother can help me open a grocery store in the city and we can split the profits.”

Following the death of her husband Mohamed, Barakat relied on the aid that charities provided in al-Bab as well as help from her family. She said that the aid was never enough to cover her bills, though, as her living expenses add up to more than 100,000 Syrian pounds ($200) per month.