The Turkish Gaziantep University has opened three faculties in the opposition-held Aleppo countryside, giving students there an opportunity to earn a degree from an accredited university. 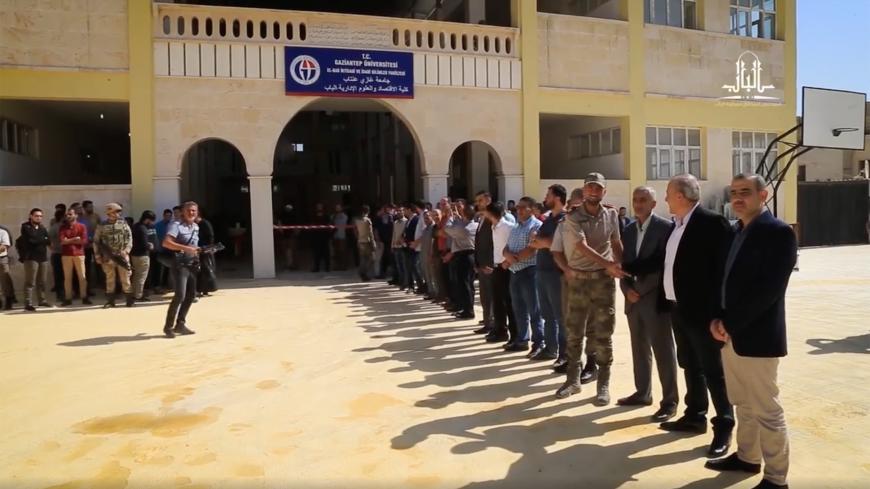 People line up for the opening of Gaziantep University in the Aleppo countryside, Al-Bab, Syria, Oct. 9, 2019. - Facebook/ElbabMeclisi

ALEPPO, Syria — Enrollment has been open for Syrian students in the Turkish Gaziantep University facilities in the Aleppo countryside since Turkish President Recep Tayyip Erdogan approved the move Oct. 4.

The facilities were officially opened Oct. 9. In attendance at Gaziantep University in Al-Bab's inaugural ceremony were Deputy Governor of Gaziantep Shinoul Asmar, a delegation from the Gaziantep University headed by President Ali Kour and head of the local council of Al-Bab city Jamal Othman, in addition to prominent figures from opposition-affiliated local councils in the Aleppo countryside.

According to Anadolu Agency, Kour talked about a sacred right to education and the need to raise living standards.

Activist Seba Nker from Idlib told Al-Monitor, “Opening the three faculties of the university in Aleppo countryside is a positive step. It will be promising for the students' future and offer them opportunities to pursue their university studies without traveling to Turkey.”

Activist Asmaa al-Hussein, who teaches at Al-Hayat University for Medical Sciences in Maarat al-Numan in the Idlib countryside, told Al-Monitor, “The inauguration of faculties of Turkish universities in liberated areas in northwestern Syria is an important initiative. Students [will] receive a university degree from an accredited university, as opposed to the available options in opposition areas in the Idlib and Aleppo countryside — private and opposition-affiliated universities.”

Director of the education office at Al-Bab local council Fawzi al-Sayeh told Al-Monitor, “Gaziantep University is among the best in Turkey. In the coming years, more faculties will open across different disciplines like medicine and engineering, among others that our children are calling for.”

Staff member in Gaziantep University in Turkey Abdul Monem Halabi told Al-Monitor, “Opening Gaziantep University faculties in Aleppo countryside offers hundreds of Syrian students in liberated areas a chance to study yearly in the religious, economic and education faculties. Studies will have accredited and reliable university supervision. These faculties have solved many students’ problems with accreditation at a reasonable price. We hope sponsoring parties in Turkey will help cover students’ tuition fees with grants and scholarships and urge them to pursue their education properly.”

He added, “The three faculties are not enough. Applied sciences must also be given attention, especially civil and information technology engineering as well as agriculture and food studies, due to the current and future pressing need and low availability of these disciplines in opposition-held areas.”

Ahmad Taan, the former president of the International Sham University in the Aleppo countryside, told Al-Monitor, “This step is critical if long overdue. We have been working in this direction for more than six years.”

He added, “Opening a branch for an official university affiliated with the Ministry of Education in Turkey has been a dream for many students because many universities have been trying in vain to get accreditation for years. This project is undoubtedly vital, as it gives students comfort and reassurance, removes the obstacle of accreditation and dispels concerns about the education process in Syrian opposition areas.”

He added, “Opening faculties will have a positive impact on education, curricula, scientific advancement and elevation of research and education. Of course, this is a first step that must be followed by others. The three faculties are not enough and do not meet the needs or satisfy the ambition of our children in liberated areas. There is a pressing need for faculties like law, sociology, psychology, philosophy and applied sciences like medicine and engineering, especially in liberated areas. Many challenges await these areas to rise from chaos into a state and from the rubble into stability and reconstruction.”