Students in northern Syria depend on Turkey to complete degrees

The Turkish Basaksehir Academy in al-Bab is gaining popularity in northern Syria because of its internationally recognized degrees, but the high tuition fees exclude students from low-income backgrounds. 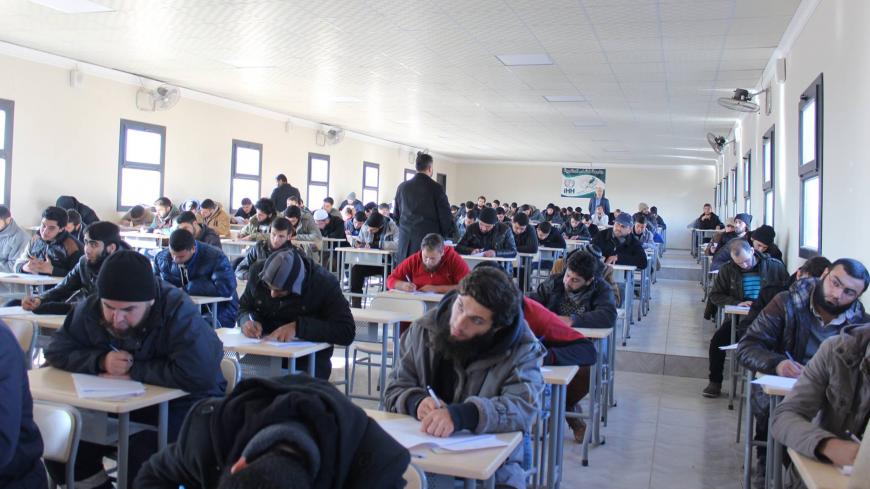 ALEPPO, Syria — Many secondary school graduates in northern Syria have moved to Turkey to complete their university studies due to a lack of internationally accredited universities in the areas under the Syrian opposition's control. These students believe a university degree from Turkey will benefit their education and increase their chances of finding suitable job opportunities. Meanwhile, the students who are unable to travel and pursue their studies abroad are waiting to obtain a university degree from an internationally accredited higher education institution in Syria.

The Euphrates Shield area, controlled by the Free Syrian Army, has three universities. The International Sham University opened near Azaz on June 23, 2016, and is affiliated with the Council for Higher Education established by Syrian academics in May 2015. The university is administered by the Foundation for Human Rights and Freedoms and Humanitarian Relief (IHH) and collects from its students an annual tuition fee of $100.

The Free Aleppo University, affiliated with the Ministry of Higher Education at the opposition Syrian Interim Government, opened in mid-2016 and has branches in the Aleppo countryside. It charges an annual tuition fee of $100. However, these two universities do not grant students internationally accredited certificates.

The third university in the Euphrates Shield area is the branch of the Turkish Basaksehir Academy, opened in the city of al-Bab on Dec. 12, 2017, under the auspices of the local city council and in the presence of Selahattin Yildirim, representative of the Turkish Directorate of Religious Affairs.

This university has failed so far to attract a large number of students. Although it is the only university in the Euphrates Shield area providing internationally accredited certificates, its high tuition fees, ranging between $1,050 and $1,850, seem to be pushing students away.

“The branch of Basaksehir Academy has opened in the Euphrates Shield area in order to accommodate high school students who for a long time now have been unable to pursue a university education. The branch allows students in this area to complete their studies under the best conditions and standards,” Hassan Shalabi, deputy director of Basaksehir Academy, told Al-Monitor. “This is the first Turkish university to open in the Euphrates Shield area and it will offer important opportunities for students to complete their university studies without the need to travel to Turkey or other countries.”

Shalabi explained that, for a university to meet students’ ambitions, it must offer international accreditation and recognition. He added, “Courses at Basaksehir are in Arabic, although the academy is Turkish. The branch offers various specializations and disciplines to meet the demands of the students and labor market. The branch includes departments for Arabic language, economy, Islamic banking, Islamic studies, jurisprudence and doctrine, fundamentals of religion, family studies, Dawa [preaching of Islam] and information. The university administration intends to open new sections in early 2019, namely engineering, psychology, mathematics as well as branches specialized in reconstruction.”

Justifying the high annual tuition fees, he pointed out this includes the cost of obtaining an accredited certificate. “The students’ tuition fees do not entirely revert to the university, but part is allocated for accreditation and for ensuring better education,” he said.

Teachers at Basaksehir in al-Bab are Syrian. Some live in al-Bab and the other towns in the Euphrates Shield area, while others reside in Turkish cities in the border provinces of Gaziantep and Kilis. The Turkish authorities allow them to pass to al-Bab through the Bab al-Salama border crossing.

Al-Bab resident Mohammed Siraj obtained his high school diploma in 2017 but has yet to enroll in a university in the Euphrates Shield area. "The choice is difficult," he said. "The International Sham University and Free Aleppo University are not internationally accredited. I do not want to study for a certificate that does not qualify me to get a job. The branch of the Turkish Basaksehir Academy is very expensive. I come from a poor family and cannot afford the tuition fees. I may have to wait for a scholarship.”

Mohamed Khadr, director of student affairs at Basaksehir Academy, told Al-Monitor, “Al-Bab branch relies heavily on scholarships. This year [2017-18] we admitted 60 students; most of them have obtained a scholarship from Turkish charities and the Turkish Religious Endowment Organization. Most of the students in the Euphrates Shield area come from low-income families and cannot afford to register with us.”

Located in the southern part of al-Bab, the Turkish Basaksehir Academy is housed in a three-story building that is being rented until the academy's permanent building to the west of the city is fully functional in cooperation with al-Bab council.

“I have received a four-year full-time scholarship and I am enrolled in the Islamic Studies Department at the academy,” Hosni Mahmoud told Al-Monitor. “The grant is provided by the Turkish Religious Endowment Organization. I hope the number of granted scholarships increases next year to allow more students to receive a university education. I would not have been able to enroll in this academy if it weren’t for the scholarship.”