Turkey's Harran University is scheduled to open a new campus in Syria, in the Euphrates Shield area, after signing an agreement with al-Bab's local council. 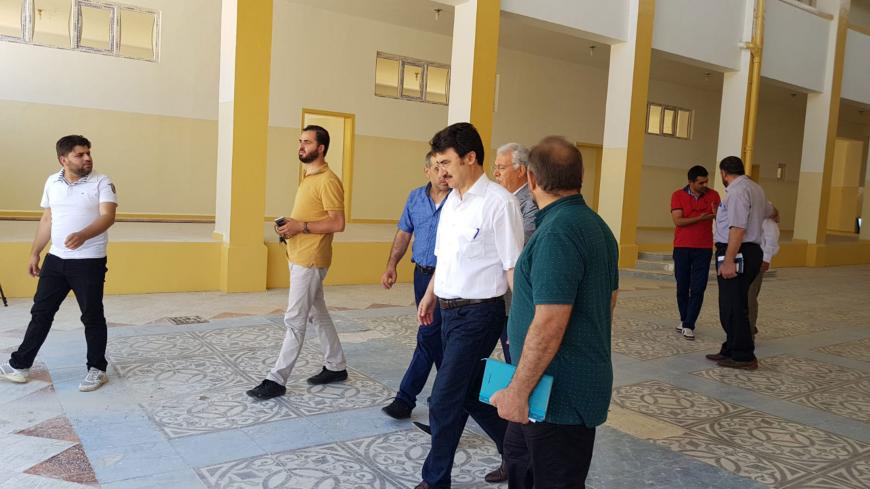 A delegation from Harran University visits the premises of the new campus in al-Bab, Syria, June 6, 2018. - Facebook/harranedutr

ALEPPO, Syria — The local council of al-Bab in the Euphrates Shield area in Aleppo's countryside signed an agreement on June 4 with Turkey's Harran University to open a campus in the city. On June 6, Harran University Vice Rector Ali Sariisik and a member of the teaching staff Abdulkadir Aydin visited al-Bab's local council and checked out the premises of the new campus.

Fawzi al-Sayeh, the director of the educational bureau at al-Bab's local council, told Al-Monitor, "The implementation of the agreement signed between the local council and Harran University began on June 7. Under this agreement, the local council provided the building, formerly the city's preaching school. We started working on repairing the building and we should be done by the end of June. The process of painting and repairing damaged doors, windows and floors is nearly over. We will receive support from the Turkish government to secure the necessary equipment and teaching materials."

The preaching school is an Islamic religious school that teaches students to become preachers and imams in mosques. The school, however, shut down after the Free Syrian Army (FSA) took over al-Bab in 2012. Since then, the school was transformed into a military headquarters, first used by the FSA and later by the Islamic State (IS) from early 2014 until the group was expelled from the city in 2017. Sayeh said the building was partially damaged by the shelling and needed restoration.

He added, "Al-Bab's local council will also be responsible for providing free accommodation for non-resident students. In return, the university would offer educational services to students in the Euphrates Shield area free of charge."

Sayeh expects around 500 students to be enrolled in the 2018-2019 academic year. He explained that registration begins in early August, and students who received their high school diploma in the 2017-2018 academic year can enroll. Students who received their diplomas in the past five years can also apply if they meet certain conditions, to be announced later on, he noted.

He added that students who passed the YOS test, the Turkish examination for foreign students, will be a priority. After all students are registered, the academic year will begin in mid-September, he said.

Sayeh said, "The Harran University campus in al-Bab will include several faculties and departments. At first, we will establish the faculty of engineering and the faculty of science with its physics and chemistry departments. In the coming years, we will establish new faculties for commerce and economics, law, journalism, business, languages, medicine, pharmacy, dentistry and nursing. All these majors are needed in the labor market in areas under the control of the opposition in northern Syria in general."

Sayeh explained that courses will be given in Arabic, English and Turkish. Syrians and Turks with doctoral degrees will be hired, he said, noting that the issue of Syrian students who had to drop out of university during the war "is still being discussed between the local council and the university."

Harran University is a public university in Turkey with over 800 faculty members offering modern educational services in 70 different departments, using labs, projectors and other state-of-the-art materials. The Turkish government seeks to help Syrian students in areas outside the control of the regime in the Euphrates Shield area. Opening a university campus in al-Bab and in other cities will contribute to solving the problems of many Syrian students and encourage them to continue their studies.

A delegation from Harran University first visited the Euphrates Shield area, particularly Jarabulus city, on April 4. The delegation met with local council officials and discussed the YOS test for 2018- 2019, which took place on May 6 in Jarabulus, giving Syrian high school graduates the chance to study at a Turkish university.

The Harran University campus in al-Bab is the ideal choice for Syrian students in the Euphrates Shield area, compared to the other three universities of the area.

International Sham University opened in June 2016, near Azaz, and is run by the IHH Humanitarian Relief Foundation. Students pay an annual fee of approximately $100. The Free Aleppo University, affiliated with the Ministry of Higher Education of the opposition's Syrian interim government, also charges students $100 per year. However, neither of these universities grants students internationally recognized diplomas.

The Turkish Basaksehir Academy opened its campus in al-Bab in December 2017. It failed to attract a large number of students due to its annual fees, ranging between $1,050 and $1,850, although it was the only university in the Euphrates Shield area that provided internationally recognized diplomas.

Al-Bab’s local council expects a significant number of students to enroll in Harran University, given the free services it provides to all students and the internationally accredited diplomas it offers without the need to travel to Turkey.

Mahmud Abbas, 19, from the town of Marea in northern Aleppo, is now taking his finals in high school. He hopes he can get his diploma this time because he failed to do so last year. He told Al-Monitor, "I now have the opportunity to study civil engineering nearby, in al-Bab, which is only around 30 kilometers away from Marea. I do not have to leave my family and go to Turkey anymore to continue my studies. This is great news. I am doing my best to get the highest grades so I can get a seat in Harran University in al-Bab."

Abbas added, "Most students from my high school would love to get in Harran University. It has great faculties and departments, such as engineering and science. Most importantly, the university is free and most of us are from low-income families that cannot afford to pay tuition, whether in Turkey or in expensive universities in the Euphrates Shield area."