Turkey continues setting up parallel structures in Syria, the latest being a branch of Harran University in al-Bab. 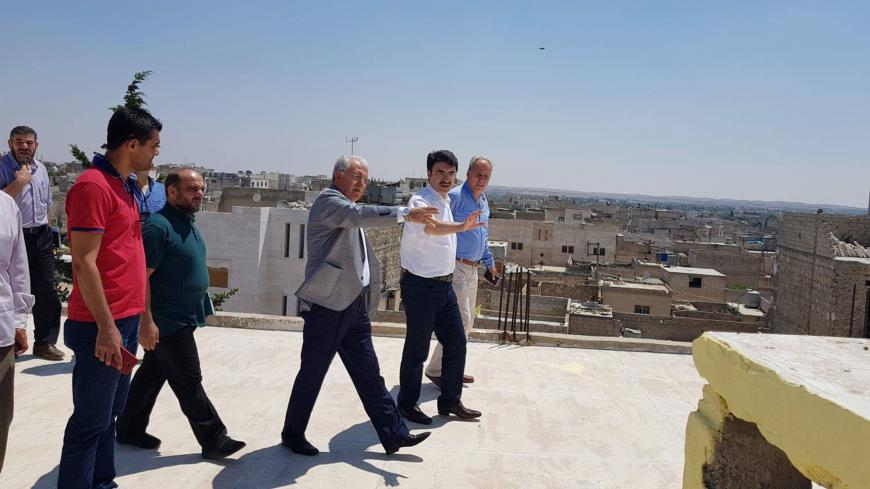 A delegation from Turkey's Harran University inspects the site of the school's new branch in al-Bab, Syria, in an image uploaded June 6, 2018. - Facebook/harranedutr

Turkey plans to open its fourth university in the northern Syrian territory it controls. It is just one of many steps that have people wondering if Ankara ever plans to leave the area.

In an apparently organized effort to establish parallel institutions in Syria, Turkey announced that Harran University will open a campus in the town of al-Bab, which Turkey captured during Operation Euphrates Shield (August 2016-March 2017). According to information on the school's website, the university's vice president, Ali Sariisik, has inspected a building to house the new facility.

“Al-Bab campus will be opened following completion of infrastructure and other preparatory work. The Harran University delegation met with local representatives in the building, which was flying the Free Syrian Army [FSA] flag,” the website said. “With completion of the work on setting up the campus, thousands of young people will finally have a university to attend at Jarablus, Cobanbey (al-Rai), al-Bab and Afrin,” having been cleared of forces from the Islamic State, the Kurdistan Workers Party and the Kurdish Democratic Union Party, all of which Turkey considers to be terrorist groups.

Classes at the Harran extension will be taught in either Arabic, English or Turkish, depending on each department’s assessment of the most appropriate language for its field.

“We want to be a light of hope for the youth [in al-Bab],” the university rector, Ramazan Tasaltin, states on the school's website. “We want to fill the massive vacuum in the field of education.” The website stresses that with this initiative, people who can't go to Turkey to study will now have an opportunity to acquire an education in their own country.

On May 11, the school held exams taken by 800 Syrians in Jarablus and al-Bab for the opportunity to study in Turkey. The tests were conducted in Turkish, English and Arabic. Based on statements by Tasaltin, the reasoning behind the effort was political.

“The US sent Syria 5,000 truckloads of weapons,” Tasaltin said.” “Turkey, for its part, sent 10,000 trucks of humanitarian assistance. As a university, we want to contribute to the humanitarian efforts of our country.”

As noted, before establishing Harran University, the Turkish government, either singularly or by funneling assistance through civil society organizations, had already opened three universities in Syria. In 2016, Damascus International University began operations in Azaz in cooperation with Turkey’s Humanitarian Assistance Foundation. Free Aleppo University, which opened the same year, is affiliated with the Higher Education Ministry established by the Syrian opposition tied to the so-called Syrian Interim Government.

The Basaksehir Arabic Language and Islamic Sciences Academy opened in 2017 in al-Bab. The academy, with departments of Sharia and Islamic economics, is under the control of the Istanbul/Basaksehir-based Inspiration Foundation. Its students receive scholarships from the Turkish Religious Foundation. Although the school promotes itself as a major educational institution, its diplomas are not recognized in Turkey.

Turkey's taking administrative and legal actions in other countries without official invitation has been cause for much debate. Are such actions symbolic of nationalist aspirations or merely efforts to find temporary solutions to real problems? The poet and author Selim Temo, who was dismissed as an assistant professor from Artuklu University in 2017 in a state of emergency decree, says the Harran University project is motivated by “colonialist aspirations.” He also thinks it will fail.

“Our [Turkey's] recent interest in the Middle East was inspired by colonial illusions. Universities along the Turkey-Syria border were designed according to the needs during the Syrian civil war,” Temo told Al-Monitor. “Today, thousands of Syrian students study in Arabic-language departments at Artuklu, Harran and Gaziantep universities. You can call them ‘parallel departments,’ because they aren't attached to the parent school, and their departments are filled with Muslim Brotherhood-affiliated instructors. To open a faculty at al-Bab is a manifestation of the same madness and dreaming of the past. Their sole motivation nowadays is anti-Kurdism. That school, too, will end up being a regional elementary school with an unfinished building.”

Turkey is quietly assigning administrative officers to areas taken over in the Euphrates Shield campaign and Operation Olive Branch (launched in January). Ahmet Turgay, deputy governor of Gaziantep, is now working out of an office in Jarablus. In the area between Jarablus and al-Bab, Turkey’s Office of Religious Affairs and entities attached to the Ministries of Interior, Education, Health and Communications are indeed creating a parallel structure. Turkey’s Education Ministry has organized schools in Jarablus, Cobanbey, al-Bab and Azaz where about 200,000 students are being educated. Recently, these students received their report cards, which were adorned with Turkish and FSA flags, in ceremonies attended by Turkish officials.

Turkish police in 2016 and 2017 trained 5,000 Syrians for a parallel police organization, and Turkey's postal service opened branches in Jarablus, al-Bab and Cobanbey. Selahattin Yildirim, attached to Turkey’s Office of Religious Affairs, was appointed mufti of al-Bab. Ankara is also moving ahead with activities to set up an industrial zone and a power station near al-Bab.

What will happen to all these institutions and operations when the area returns to Syrian-government control? Turkish officials don’t want to hear this question. For a foreign power to establish parallel institutions in a sovereign state is a serious legal and diplomatic issue, but for now, nobody in Turkey seems to care.