Ankara plans to establish two medical educational facilities in a small Syrian town across the border as Turkish entrenchment deepens in Syria. 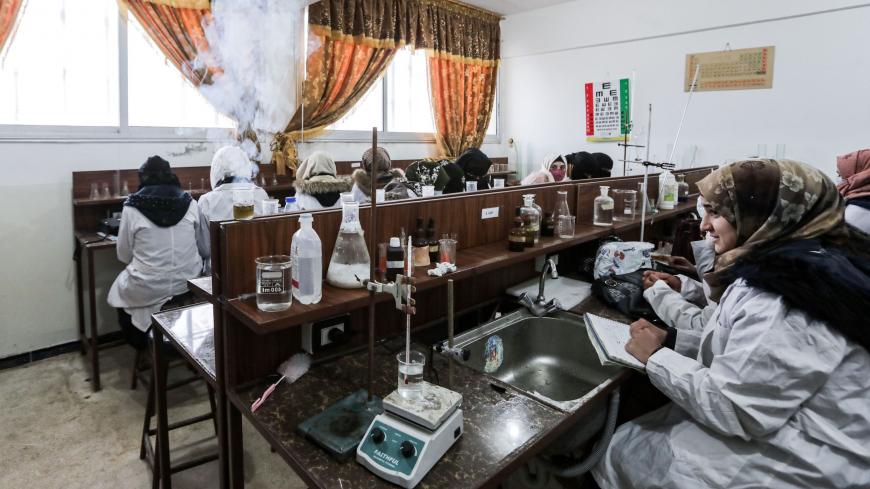 This picture taken on Nov. 26, 2020, shows Syrian students from "Aleppo University in Liberated Areas," controlled by the pro-Turkey opposition, attending a tutorial at a laboratory facility in Marea in the rebel-controlled northern countryside of Syria's Aleppo province. - BAKR ALKASEM/AFP via Getty Images

Ankara’s acknowledgment of intelligence contacts with Damascus had raised expectations of a shift in its Syria policy, but recent Turkish moves suggest that such a prospect remains distant and Ankara remains bent on cementing its grip on Syrian territories under its military control.

Last week, President Recep Tayyip Erdogan decreed the establishment of two educational facilities in al-Rai, a small northern Syrian town just across the border. The town — home mostly to ethnic Turks known as Turkmens — is called Cobanbey in Turkish. The Cobanbey Medical Faculty and the Cobanbey Vocational School of Health Services would operate as branches of the Istanbul-based University of Health Sciences, Erdogan said in the Feb. 5 decree.

The planned colleges are the latest addition to a multifaceted structure that Turkey has been shaping in the Syrian regions it controls, reinforcing suspicions that it is there to stay despite its stated commitment to Syria’s sovereignty and territorial integrity in the Astana process. Turkish statements greeting the new project carried a sense of conquest and Ottoman nostalgia typical to the regional vision of the ruling Justice and Development Party (AKP).

Cevdet Erdol, the rector of the University of Health Sciences and a former AKP deputy, hailed the project as a “blessed step” by a “Great Turkey” that knows no boundaries but those “of the globe.” Turkey, he said, is working to spread the legacy of Abdulhamid II, the Ottoman sultan who founded the empire’s first medical school in 1903. The building that housed the imperial school is now used by Erdol’s five-year-old university.

The rector boasted that his university had already opened medical and vocational schools in Somalia, Sudan, Uzbekistan and the Philippines’ Muslim-majority region of Bangsamoro. Said initiatives, however, were part of intergovernmental agreements, while those in Syria lack any consent whatsoever on the part of Damascus as the de facto Turkish occupation of Syrian territories continues.

The plan is legally dubious even under Turkey’s own laws. In the decree, Erdogan referenced an article in the Higher Education Law that allows public universities to open academic units abroad, but the provision says nothing about unilaterally founding schools on foreign soil. Such schools require bilateral agreements that require parliamentary ratification.

Tulay Hatimogullari, a lawmaker for the pro-Kurdish People's Democratic Party, raised the issue in parliament. In a written question to the presidency, she said the move would serve only to deepen the deadlock in Syria and asked, “On the basis of what mandate or agreement is a decision made to establish a medical and vocational school in Syria despite the statement of the Syrian Foreign Ministry? Is the decision … an expression of Turkey’s intention to stay in Syria?”

Political and legal aspects aside, one struggles to see the practical viability of planning a facility as demanding as a medical school in a small settlement in a conflict zone with minimal infrastructure. Al-Rai’s pre-war population was just over 4,600, according to a 2004 census, though the town is more crowded today because of refugees.

The decision was greeted with joy by some Syrian Turkmen groups, but not by Turkish cities that aspire to have their own medical schools, including al-Rai’s neighbor Kilis. Local grumbles forced the head of the AKP’s Kilis branch to assert in a press statement that efforts were underway to establish a medical school in the city despite “the obstructions of certain forces.”

Turkey has already opened a vocational school in Jarablus, a school of economics and administrative sciences in al-Bab, an Islamic theology school in Azaz and a school of education in Afrin, all affiliated with Gaziantep University in the Turkish border province. The schools' academic staff and other resources are very limited, with tuition fees ranging from 860 to 940 Turkish liras ($122-$134) per year. The school in Afrin had 160 students last year, while enrollment in the other three schools totaled about 620. The fate of the schools and the validity of their diplomas once Damascus regains full control of northern Syria remains a big question.

Education is only one aspect of what many see as a drive to Turkify the region. Various Turkish government bodies have been building “parallel” institutions in northern Syria in the past several years, in addition to facilitating and sponsoring public services run by local councils. The Health Ministry, for instance, has opened five hospitals in al-Rai, Jarablus, Azaz, al-Bab and Marea, while the Religious Affairs Directorate has renovated more than 450 mosques. The Turkish security forces have trained locals as police and helped them establish police stations. The Turkish postal service has opened 12 branches in the region that offer money transfers among their services. Critically, Ankara poured Turkish liras into northern Syria last summer as an alternative to the Syrian pound.

Public buildings displaying the Turkish flag next to the banners of Syrian rebel groups have become a common sight in the region, as have bilingual signboards in Arabic and Turkish. Some streets and parks have been renamed after prominent Turks.

Turkish civic groups have followed government agencies into the region, working jointly on initiatives such as the Anatolia Culture Center, inaugurated in Afrin in late January.

In Ankara’s narrative, all are benevolent acts to help the war-ravaged Syrian people. The pro-government media, too, depicts them positively.

Yet, when the structures created by Turkey in al-Bab, Azaz, Jarablus, al-Rai, Afrin, Tell Abyad and Ras al-Ain — and perhaps Idlib down the road — are added together with the Syrian National Army, the police forces and the Gaziantep-based alternative government that opposition forces have created with Turkish support as well as Turkey’s growing military buildup in the region, a scenario in which the formation of a “parallel state” is followed by an annexation attempt cannot be dismissed.