Good universities can be hard to find in a country besieged by war for seven years, so some Syrian students are turning to online schools to pursue their education. 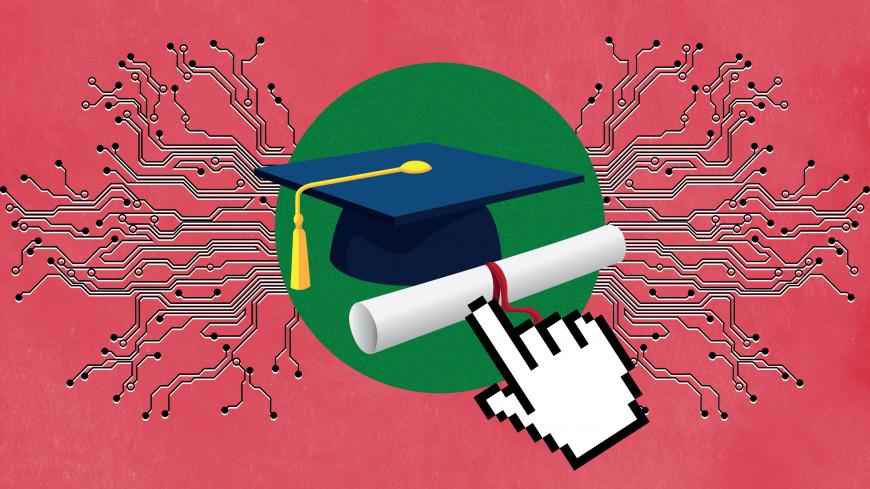 As parts of Syria remain besieged and others are inaccessible, students unable to make it to colleges are finding virtual universities a practical alternative.

Syria and the lives of its people have changed drastically during the nation's seven-year civil war. After the revolution began in 2011, the Syrian regime launched military operations across the country, blocking roads and the entrances to some cities such as Hama, Daraa and Homs. The regime was able to recapture some cities from the opposition, but in others, opposition forces stood their ground.

As it became clear that the crisis was nowhere near ending, Syria’s youth started looking into alternatives to the universities they were unable to attend. Some studied in their homes; others joined educational centers within their besieged areas.

Online universities became the most convenient solution. The University of the People (UoPeople), an American school based out of Pasadena, California, has been the choice of 600 students throughout Syria, a good number of whom live in besieged Ghouta.

Obada Shalhoub, a university student in Ghouta, had stopped attending classes for three years before he joined UoPeople. “Honestly, when our areas came out from under the Syrian regime on Oct. 1, 2012, they were lacking all aspects of educational services, particularly since the regime had targeted schools. Back then I was a high school senior, just about to start university, when my educational path was put on hold for three years. I only graduated high school,” he told Al-Monitor.

He said, “I then started looking for universities, but we had none in Ghouta. After several university centers opened, I enrolled in one for two years, but no one would recognize these centers’ certificates at the time. I later found UoPeople online and was encouraged to enroll because it required no registration fees. UoPeople is 100% [tuition-]free and its certificate is recognized worldwide, so this is how I ended up in an online university."

(The school does charge "assessment fees" of $100 per undergraduate course and $200 each for its Master of Business Administration program.)

Not all students meet online university requirements, which can include speaking English and having electricity and internet service available at all times. Most of Syria’s besieged areas have electricity and fuel services that are unreliable at best.

Massar Academy is a post-graduate institution operating in different parts of Syria, with a branch in eastern Ghouta. Bashar Anjileh, head of Massar's information technology department, told Al-Monitor, “We have selected our courses from approved curricula in several international universities, with some modifications introduced by our specialists. We didn't rely on the curricula adopted by Syrian public universities because they aren't up-to-date with recent developments.”

Anjileh added, “We opened the academy in Ghouta to accommodate students who were forced to cut their education short in light of the war and the siege imposed on eastern Ghouta. Our intensive efforts allowed us to obtain recognition from the [opposition's] Syrian Interim Government, and we now seek to develop our work globally.”

Majed Daas, a resident of Ghouta studying computer science at UoPeople, told Al-Monitor, “I dropped out of school for three years when the siege was first imposed. After a while, educational centers started providing education services for high school graduates, but the level was substandard and the certificates were not recognized. I then learned about UoPeople through my friends, so I looked it up and enrolled.”

Daas added, “Although we don't have internet and electricity at all times, we need to hold on to learning so we can rebuild our country in the future. Yet many students who were displaced or are now living in tents can't continue their education. Some were even forced to drop out so they can work and provide food for their families.”

Online universities, unlike standard brick-and-mortar schools, don't offer the famous/infamous college experience. Daas noted, “The difference between studying under siege and having a normal university experience is huge. I can go on and on about how ordinary universities offer a great social experience, allow students to make new friends and acquaintances. Online universities and living in Ghouta offers education and nothing more.”

Sarah Vanunu, UoPeople public relations director, said the school pays special attention to Syrian students who pursue their studies despite all the difficulties of war in their country. She noted the university has about 600 students from Syria, 10 of whom are trapped in the Damascus suburb of Douma, where a chemical attack allegedly launched by the regime took place April 7.

“Despite their suffering, Syrian students were doing their best not to drop out,” she told Al-Monitor. “Internet service is crucial for attending an online university. Some Syrian students with no regular access to the internet requested a freeze of their studies, with the intention of resuming their education once things settle down.”

Of the more than 600 Syrian students enrolled, about half are actually in Syria and the other half are spread around 40 countries in the Middle East, Europe, the United States and other places, Vanunu said.

“In our very first graduating cohort of nine students, one of them was indeed Syrian, so we can say we have had Syrian students since day one,” she noted.

Speaking about how she feels when hearing news from Syria, Vanunu said, “We at UoPeople care about our students’ situation. In fact, a personal adviser is appointed for each student, to follow up on the program and make sure it is on the right track. The adviser also provides support for students throughout their educational journey.”

The school always checks in with students when natural disasters or terrorist attacks occur in their areas, she said. "In recent days, we kept a close eye on the events in Ghouta, since we have a good number of students living there. I personally contacted some in Douma before the recent attack.”

Vanunu added, “I know they appreciate our concern and support, but I don't think they are aware of how inspiring we find them. It's truly amazing how they can keep going with the same strength and persistence after everything they have been and are still going through.”

Other institutions have also tried to provide educational services in the besieged areas, such as Free Aleppo University, which has branches in many opposition areas and provides post-secondary educational services. Mohamed Nour al-Tinawy, a third-year medical student there, told Al-Monitor, “We insist on getting an education because we realize that it is the future, no matter what. Our areas have a shortage of educated medical staff in general, since most fled during the first couple of years of the revolution. This is why we figured medical education could help fill the gap and treat the sick and wounded.”