The 350,000 residents of Eastern Ghouta continue to live under the siege, where aid is never enough and the semi-autonomous way to survive the blockage was halted due to water shortage and contamination. 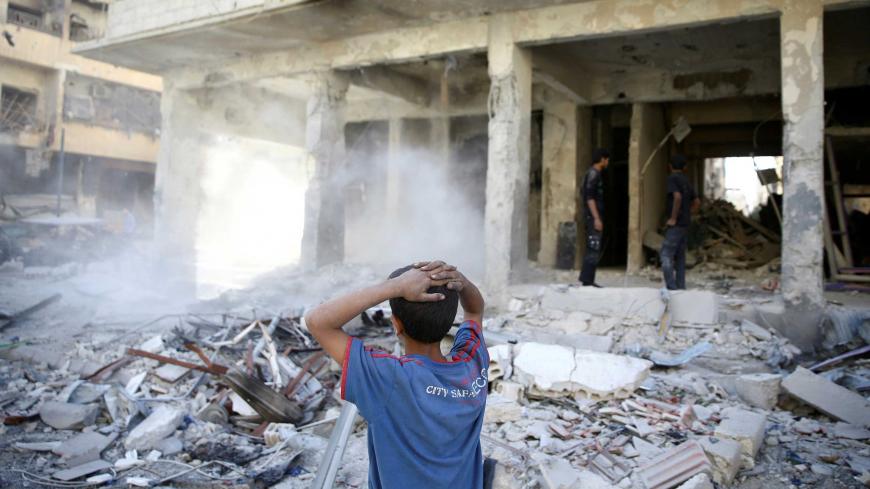 A boy stands at an airstrike site in the rebel-held besieged city of Douma, in the eastern Damascus suburb of Ghouta, Syria, Oct. 6, 2017. - REUTERS/Bassam Khabieh

“We are in the Middle East and in the Middle Ages,” said Firas Abdullah, 24, a photographer and media activist from the Ghouta Media Center in Douma, rural Damascus. “People take the wood from trees directly to warm up next to the fire, and they don’t have enough food to feed themselves. We eat what we find.” In October, Abdullah started a media campaign to inform the international community about the four-year siege on Eastern Ghouta, which has led to death and starvation. Children especially were the most vulnerable victims of the cruel siege. Douma and the neighboring villages are continuously subjected to bombs and missiles from the government forces.

It’s a wonder that the 350,000 residents of Eastern Ghouta have managed to survive during the past four years.

“At the beginning — in 2013 and 2014 — many people were still cultivating the lands,” Beyan Rehan, 31, a member of the local council in Douma told Al-Monitor in a Skype conversation. “My uncle is still cultivating outside Douma, in the countryside. But even agriculture became expensive, and over time most of the people were not able to sustain it.” In 2015, Rehan, a former geography student, became the first woman elected to the local council, where she was re-elected last month. Among the 310 members, only two women won seats. Rehan became the coordinator of the women’s affairs office, working in collaboration with other women’s organizations. Throughout liberated areas all over Syria, local councils have tried to be a substitute for the absent government, providing municipal services, medical and humanitarian aid in the form of food and shelter, as well as media services and education when possible.

“We try to keep the agricultural fields in the southern part of Eastern Ghouta. But it is expensive. So we always need to rely on the only crossing available, which is the Wafideen crossing controlled by [President Bashar al-] Assad’s forces and which is the gate for the traders,” Rehan said.

Syrian refugees originally from Eastern Ghouta who now live in the Zaatari refugee camp in northern Jordan are able to send money to Damascus through Western Union and then to Douma. “In Zaatari camp, people call our shops mahallat al-Ghouta [shops of Ghouta] selling foodstuffs,” Khaled al-Qazq, a resident of Zaatari camp, told Al-Monitor. “It’s from this street and this business here we are able to send money to our parents, sisters, brothers, sons in Ghouta to let them buy the expensive food and survive.”

Abdullah also captured with his pictures the many people who in the beginning of the siege cultivated vegetables on their rooftops. But with the water shortage, most of them had to stop. On rooftops, as in the agricultural fields, the lack of an irrigation system providing clean water caused the end of this semi-autonomous way of surviving the siege. “The shops in Douma are all the same. You don’t find any products, just the few foodstuffs that have to pass to the regime checkpoint and then to the militia groups,” he said. The two opposition armed groups — Jaish al-Islam (Army of Islam) and Failaq al-Rahman (Corps of Mercy) — militarily control the area under siege, and they often interfere in the public and private affairs of Ghouta’s population.

Another source, who spoke on condition of anonymity, told Al-Monitor that the two armed groups are also responsible for worsening the conditions of Assad’s unlawful crimes against the poor population. According to that source, humanitarian nongovernmental organizations (NGOs) that provide food, clothes and medicines denounced the armed groups, which allowed the entrance of aid only after taking a hefty percentage of the donations.

The Italian-based Nour Committee has sent donations to the people of Ghouta on a regular basis since 2014. The last time they relied on Kids Paradise, a Syrian NGO in Turkey, to deliver the funds. “The founders of Kids Paradise have strong connections with farmers, artisans and bakers; so we tried to support, for example, local bakers to make their bread. But most of the food comes from the black market anyway,” Lisanna Genuardi, the president of the Nour Committee, told Al-Monitor. “Some of the donors asked me if it was ethically correct to let the food arrive through the black market that fuels Assad’s forces as well as armed groups. But in the past four years, Ghouta has been left alone and the only alternative was to let them die of starvation.”

In a recently published report “Surrender or Starve,” Amnesty International denounced the siege, which has led not only to starvation and misery in densely populated areas, but also to forced displacement of thousands of residents from six besieged areas (Daraya, eastern Aleppo city, al-Waer, Madaya, Kefraya and Foua) under the so-called reconciliation agreements.

Before the city of Madaya in Western Ghouta returned to Assad’s control in April, the Nour Committee sent seeds to local populations under the project “Seeds of Hope.” They had to end the project. “Agricultural fields where our beneficiaries were trying to cultivate were constantly attacked by groups loyal to Assad’s regime — like Hezbollah taking siege of Madaya. After months we decided that it was just better to send money or foods, because seeds could not grow,” Genuardi said. “Also the water was polluted and contaminated by bombs, and so the agriculture could not benefit.”

Humanitarian aid entered Douma on Nov. 12, reaching 21,000 people, three months after the besieged city was blocked from food and basic needs. The aid is never enough for such areas. Schools are often the gathering points to distribute sandwiches and clothes, but after a few days, the crisis starts again. After a smaller delivery of aid on Oct. 30, people in Douma protested, demanding an end to the blockade instead of temporary assistance.

“Before the siege, Ghouta was famous for its camel meat, but nowadays nobody can afford it anymore,” Abdullah said.

Rehan said, “The only solution is to end the bombings and the siege, let the people come in and go out, and not living under the smuggling business to eat."

“I wish to travel to Idlib to know personally my future husband. Many of us got engaged by Skype during the siege. But if the government forces retake Douma, we will have to leave Syria — and this time forever,” she added.