As the regime continues to impose its siege on eastern Ghouta, thousands of trapped residents are making do with the limited supply of food available and depending on NGOs to get them through the Muslim holy month of Ramadan. 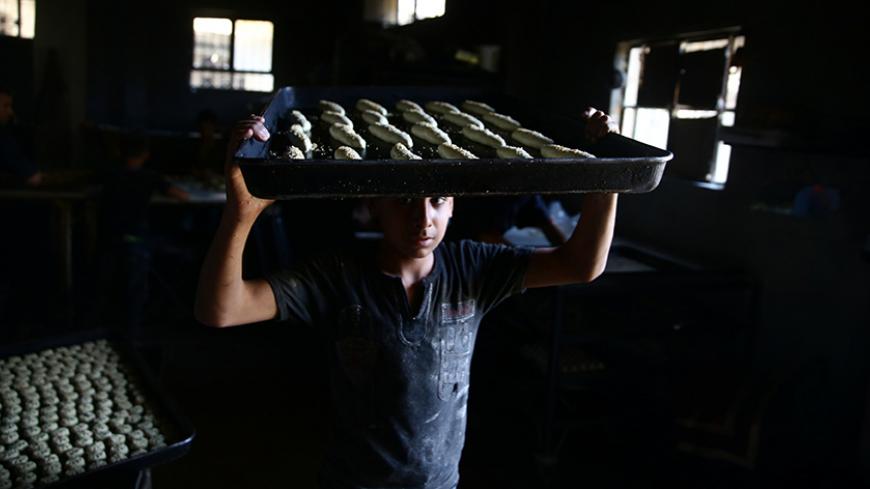 A boy carries pastries to be sold during Ramadan in the rebel-held besieged eastern Damascus suburb of Ghouta, Syria, May 28, 2017. - REUTERS/Bassam Khabieh

This year’s holy month of Ramadan is the worst in the history of eastern Ghouta in Rif Dimashq, with residents in this rebel-held area facing a severe humanitarian crisis. Food prices have increased significantly and some food items have become scarce because of the Syrian regime embargo as well as infighting between armed opposition groups in the area.

The regime’s forces and loyal militias have taken control of the eastern neighborhoods of Ghouta, taking advantage of the factional fighting.

On March 21, the situation took a turn for the worse when regime forces closed the Wafideen crossing, the only pathway through which basic food items reach Ghouta. The regime forces also took over the tunnels connecting Ghouta to Damascus’ eastern neighborhoods, causing a severe humanitarian crisis in light of the suffocating siege on the people of Ghouta.

Abu Mahmoud al-Shagouri, a resident of eastern Ghouta, told Al-Monitor, “The situation is getting worse with every passing day. It is our fourth Ramadan under a siege imposed by the regime forces.”

He said, “We cannot find anything in the market except for some vegetables that are no good for cooking; meat and legumes are very expensive and we cannot afford them. We have been living without work for a long time because of the war and siege. This is the worst Ramadan for us under these dire conditions.”

The people of eastern Ghouta used to depend greatly on agriculture to cope with the siege imposed on them since Oct. 20, 2013. However, the regime forces took control of large areas of those arable lands after advancing in the eastern neighborhoods of Ghouta. This has worsened the humanitarian situation, placing further pressure on the nongovernmental organizations (NGOs) operating in eastern Ghouta.

Since the start of Ramadan, NGOs have stepped up their efforts to provide civilians with daily iftar meals (at sunset) for the nearly 400,000 people trapped inside Ghouta.

Activist Baraa al-Shami, who is also a resident of eastern Ghouta and works as a journalist for Aleppo’s Media Center, told Al-Monitor, “There is a great burden on the NGOs working in eastern Ghouta during Ramadan, especially as the situation is going from bad to worse because of the regime and its loyalists tightening the siege.”

Shami said, “The NGOs are unable to provide daily meals to all the residents stuck in eastern Ghouta. The meals include only food for iftar, while nothing is left for suhoor [predawn meal] because of a lack of foodstuffs and the large number of people.”

He added, “Ghouta is divided into [three] sectors by the NGOs. Each day one sector only receives meals for iftar as they cannot be provided to everyone at the same time. People who are not given their meals on a specific day have to make do with the leftovers of the day before. We are talking about a siege here and there is no local or international organization that can bring in basic foodstuffs from the outside.”

In light of these conditions and lack of suhoor meals, people have been cooking herbs for suhoor and iftar during Ramadan, especially since they are still able to grow herbs in certain areas in eastern Ghouta. However, these herbs are insufficient for the minimum daily nutrient intake, especially with fasting that lasts up to 16 hours this year in Syria.

Nevertheless, “necessity knows no law,” said Seif al-Din al-Shami, a resident of eastern Ghouta. He told Al-Monitor, “Six years ago Ramadan feasts provided plenty of food, Ramadan sweets and drinks. With the outbreak of the war, Ramadan feasts became gradually less abundant. I have a family of five people. I receive an iftar meal from the NGOs every three days, and my wife cooks spinach or chard on the other days. Sometimes we have no bread. This is not enough during Ramadan, especially since we are fasting for long hours.”

He noted, “Every time we appeal to the international community, international humanitarian organizations and the Red Cross, our calls fall on deaf ears. We have become aware that the world does not care about what is happening to us. I don't understand how the world’s countries remain silent, while thousands of people are being starved only because they called for their freedom and for the change of a criminal regime. The world has sacrificed millions of Syrians to keep Bashar al-Assad in power.”

The people of eastern Ghouta are living in the worst humanitarian conditions this Ramadan. Relief organizations are doing their utmost to provide aid for the people, yet this remains barely enough for the civilians inside Ghouta. Meanwhile, the international relief organizations have not tried to provide any assistance to the trapped civilians in eastern Ghouta since October 2013.