The monthslong fierce offensive launched by Syrian regime forces on the besieged rebel-held enclave of Eastern Ghouta near Damascus has left scores of civilians dead and has depleted the resources for medical staff to treat the injured. 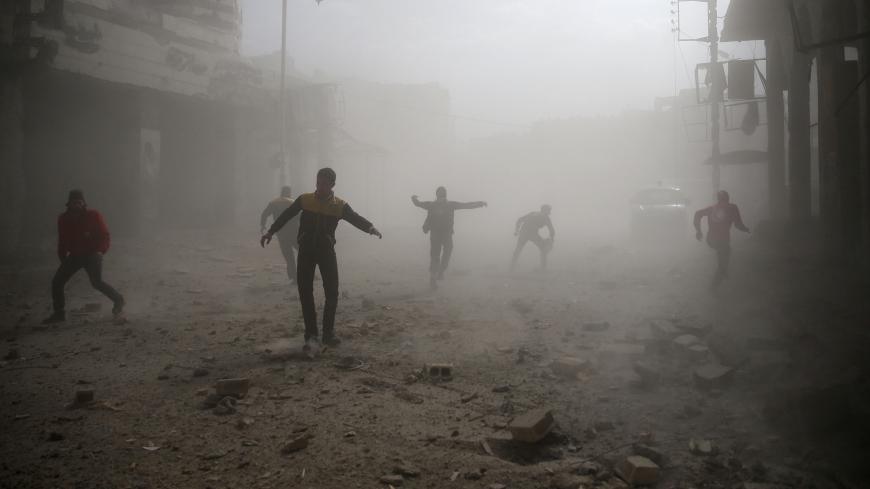 Civil Defense members and civilians are seen running after an air raid in the besieged town of Douma in Eastern Ghouta in Damascus, Syria, Feb. 6, 2018. - REUTERS/ Bassam Khabieh

ALEPPO, Syria — The Syrian regime launched fighter aircraft, cannons and missiles in a fierce attack on residential neighborhoods and public facilities in Rif Dimashq in Eastern Ghouta on Jan. 30. Dozens of people were killed, others were injured and the infrastructure was destroyed.

At least 24 people, including five women and a child, were killed in 15 air raids that targeted Otaya, al-Nashabiya, Hazarma and Deir Salman in al-Marj. Seven people were also killed, including four children, and others were injured after air raids carried out by regime forces hit Arbin the same day. The aircraft also targeted Mesraba with several air raids, killing three people and injuring others. The Syrian Civil Defense group reported the use of internationally banned cluster bombs Feb. 20 targeting Saqba in Eastern Ghouta, yet did not specify the losses.

The Aleppo Media Center reported Feb. 20 there had been 137 air raids, in addition to 44 explosive barrels that helicopters launched on the same day, killing 110 people, including women and children, and severely wounding dozens.

The Syrian Human Rights Observatory published a report Feb. 14 stating that 760 people were killed, including 300 children and women, in addition to more than 2,200 injured as a result of 5,500 missiles and air raids targeting towns and cities in Eastern Ghouta between Nov. 14 and Feb. 14.

The Directorate of Education and Higher Education in Rif Dimashq, which is affiliated with the opposition-led interim Syrian government, issued a statement Feb. 7 announcing the suspension of all classes to protest the shelling of schools, medical facilities and houses of civilians. The directorate justified its decision with its inability to protect its students and staff from the military aircraft. It called on international organizations to halt the systematic shelling on schools and civilians in Eastern Ghouta.

Yasser Obeid, the head of the local council in Saqba, told Al-Monitor, “The latest campaign that the regime launched on Eastern Ghouta targeted residential areas and vital facilities that offer services to citizens. The regime did not shell any military opposition factions’ spots. The northern and central parts of Eastern Ghouta have become distressed areas, with a rising number of victims and wounded people. We are facing a shortage in the number of doctors, medical facilities and first aid kits. Our situation is delicate.”

The United Nations announced Feb. 14 the entry of an aid convoy to al-Nashabiya, in coordination with the Syrian Red Crescent. The convoy carried food and health equipment to 7,200 people. Currently, 400,000 people are besieged by the regime in Eastern Ghouta.

With the escalation of the campaign, the Revolutionary Command Council in Damascus and Its Countryside issued a statement Feb. 11 declaring all towns and cities as distressed areas. The statement called on the UN General Assembly to unite for peace in Syria and to hold accountable the criminals of war who are targeting civilians. The statement blamed Russia first and the UN Security Council second for the war crimes that the Syrian regime is committing against civilians in Syria, in general, and in Eastern Ghouta, in particular. Sweden and Kuwait had submitted a bill for a cease-fire to the Security Council Feb. 10, but it has yet to be voted on.

On Feb. 11, activists inside and outside of Eastern Ghouta started using the hashtag #Save_Ghouta to highlight the Syrian regime's crimes.

Meanwhile, the Syrian regime forces continue to use chlorine gas to shell residential areas. Many civilians were injured in Douma and neighboring areas of the international highway on the outskirts of Harasta and Douma after the regime forces shelled Douma Jan. 13 with ground-to-ground missiles, allegedly loaded with chlorine gas.

On Feb. 20, the United Nations Children’s Fund (UNICEF) published a one-sentence press release, saying, “No words will do justice to the children killed, their mothers, their fathers and their loved ones.” The rest of the statement was blank with a footnote at the bottom: “UNICEF is issuing this blank statement. We no longer have the words to describe children’s suffering and our outrage. Do those inflicting the suffering still have words to justify their barbaric acts?”

The Palestine Scholars Association in the Diaspora issued a statement Feb. 20 expressing its anger over the civilian massacre. The Muslim people and states called for the need to take action and stop the heinous crimes.

UN Syria envoy Staffan de Mistura told Reuters Feb. 20 that the escalation might end in “another Aleppo,” referring to similar events that plagued the eastern neighborhoods of Aleppo at the end of 2016.

The French Foreign Ministry announced Feb. 20 in a statement that the attacks on Ghouta targeted residential areas and infrastructure on purpose, thus breaching international law. France blamed the events on the Syrian regime and its allies Russia and Iran, which are among the guaranteeing parties of the de-escalation agreement signed in Astana that includes Eastern Ghouta.

The shelling is ongoing and has pushed more than 5,000 families to leave their houses and head to safer areas in the besieged Ghouta area. Mohammad Bashir, the director of the department of studies at the Eastern Ghouta Relief Office, told Al-Kul radio Jan. 27 that families found shelter in the cellars of buildings. He said the United Relief Office — an independent relief and development organization offering services and care to the distressed — offered emergency aid to more than 500 displaced families from different cities and towns.

Baraa al-Shami, a media activist in Eastern Ghouta, told Al-Monitor, “The regime has been directing its anger at Ghouta for more than two months, and the shelling has recently escalated. Around 400,000 people are besieged and have nowhere to go. People are living in building cellars that have not been shelled yet. Some of these cellars have been equipped to serve as shelters, while others are unlivable. But people have to live with this situation.”

The medical field is finding it hard to rescue the wounded, especially those in critical condition. The siege is preventing the entry of sufficient medical equipment during shelling. Hamam, the director of public relations at the medical center in Saqba, who refused to reveal his full name, told Al-Monitor, “The medical situation in Eastern Ghouta is bad. As of the beginning of 2018, the fierce and hysterical shelling has wounded hundreds of civilians, and hospitals haven’t been able to welcome them all. Medical equipment has been used up during the shelling, and we demand that the UN and international organizations allow the entry of urgent medical equipment to Eastern Ghouta.”

The regime forces’ escalation followed several failed attempts to raid the enclave’s cities and towns. The armed opposition factions had managed to advance in Harasta Dec. 31 and control several neighborhoods, especially the road linking Harasta and Arbin. Whether the regime raids areas under the armed opposition’s control or incurs losses on the ground, it’s civilians who pay the price.