Despite the siege, the first sports festival in five years recently took place in Eastern Ghouta, in an attempt to engage youth and adults in sports activities. 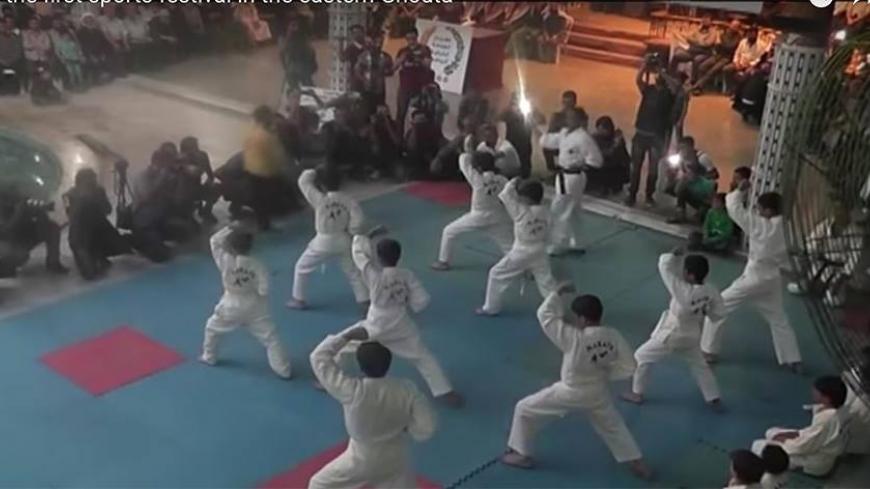 Despite the siege, children take part in the first sports festival in five years in Eastern Ghouta, Syria, in this undated still taken from a video of the event. - Youtube/Orient News

The First Sports Festival took place between Oct. 5 and Nov. 4 in the Free Syrian Army-controlled Eastern Ghouta area, in Rif Dimashq province, despite the tight siege and shelling that 400,000 residents are subjected to.

More than 1,100 participants across all age groups took part in 17 sports activities, which included track and field, wrestling, equestrian, soccer and basketball, despite the shelling and crimes by the Russian and Syrian regime air raids. The war imposed on the Eastern Ghouta cities and towns halted the festival between Oct. 12-15 and destroyed some stadiums and civilian festival locations in Harasta, Saqba and Arbin.

Local and civilian figures, as well as revolutionary institutions in Eastern Ghouta, including the Syrian Civil Defense, the Syrian Red Crescent, local councils in Eastern Ghouta, the local council of the Rif Dimashq, the unified rural relief council, the unified services’ council, the Islamic Legitimate Committee, the free police command and tribal councils, attended and took part in the festival.

The 2009 Syrian kickboxing champion Bilal Ghbeis, who lives in Saqba and serves as the head of the Executive Sports Committee and is the director of the festival, spoke about the competition with Al-Monitor.

He said, “After huge efforts and more than two months of preparations, we managed to organize a big sports festival consisting of 17 different sports competitions for all age groups, with the participation of over 1,100 athletes representing most of the Eastern Ghouta’s sports clubs. The festival took place in coordination with the Syrian General Committee of Sports and Youth and was sponsored by the Syria Regional Program, despite the shelling and devastation.”

He added, “This first sports festival had a strong start and took place in the presence of an unexpected large number of athletes and civilians from all social components in Ghouta. This proves to the world that we are an educated people who have a strong will, love life and do not give in to difficulties.”

Talal Zeina, a resident of the Ghouta region who works in the confectionery and pastry industry, told Al-Monitor, “The idea of organizing a sports festival in the Ghouta region is great and very necessary, especially for the children. It is a gateway and relief from the pressures of the war. The smiles of the happy contestants show that they loved the festival, as did most of the people in Eastern Ghouta.”

Al-Monitor also spoke to the children, who made up more than one half of the participants in the festival’s activities. Mohammed Bechara, 11, of Arbin is a sixth-grade student and a first place winner in the male 40 kilogram (88-pound) category in this festival. He said, “I am very happy with the festival and for taking part in the championship. My family and friends are happy with my achievement.”

Bechara said that he was injured in an air raid near his house last year. “I hope that tournaments continue to take place in my city, so I can play my favorite sport and take part in championships to compete with those from other Syrian cities in the future.”

The sports festival preoccupied the residents of Eastern Ghouta for an entire month, despite the Bashar al-Assad regime’s attempts to displace civilians from Rif Dimashq and empty the province of its population.

Yet, the determination of the Syrian athletes that are part of the Syrian General Committee of Sports and Youth prove day after day that sports give hope and an optimistic outlook on life, lead to increased confidence and put a smile on the faces of children and adults, particularly in the besieged parts of Syria that have risen up in the last five years.