Jaish al-Islam began a wide-scale rocket attack on Damascus in response to the Syrian regime’s shelling of eastern Ghouta, which allegedly killed civilians. 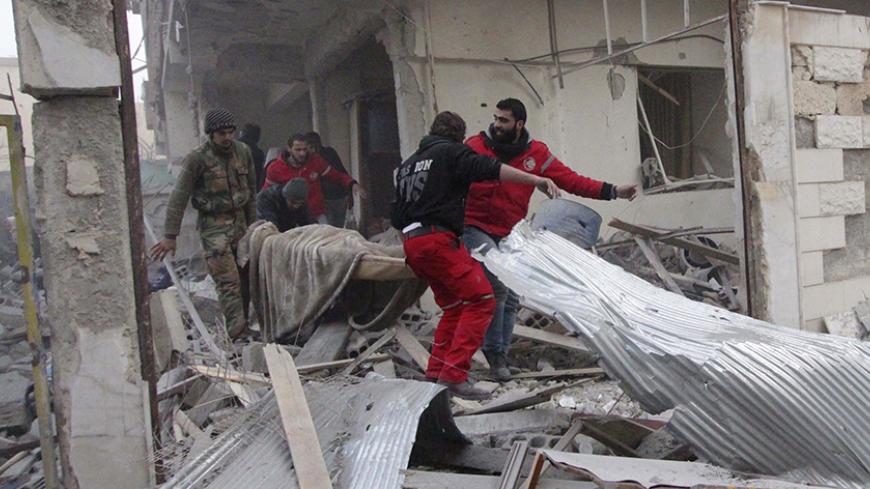 Red Crescent members and residents remove a body from a damaged site after what activists said were airstrikes by forces loyal to Syria's President Bashar al-Assad in Douma, eastern Ghouta, near Damascus, Jan. 25, 2015.
Mustafa al-Haj
January 29, 2015

DAMASCUS, Syria — In the city of Hamouriya in eastern Ghouta, Rif Dimashq governorate, Jan. 23 was no ordinary day. Syrian military aircraft attacked a crowded marketplace and killed 60 civilians, including children and women. Afterward, the market was hit by mortar shells in the heaviest bombardment in the city since the Hamouriya massacre on Feb. 20, 2013, which resulted in the deaths of 100 civilians.

The shelling came at a time when the Syrian regime has intensified its air raids on Douma, Arbin and Zamalka in eastern Ghouta. The state and pro-regime media outlets did not give any details about the shelling on the city of Hamouriya, while the Syrian news agency, SANA, reported only, “The army units are securing the exit of 107 citizens from eastern Ghouta.” SANA also released a video in which some families seemed afraid and confused while leaving Ghouta in front of the camera.

A Syrian officer who participated in the evacuation of civilians from eastern Ghouta told Al-Monitor on condition of anonymity, “The Syrian army’s shelling on terrorist positions in Hamouriya was intense on Friday, Jan. 23. We watched fire coming out of this area, and I do not think that there is a justification for the presence of civilians. The armed terrorist groups are using the area as a fortification.” The officer denied that the Syrian army shelled the market.

Anas Jadeed, an opposition human rights activist, told Al-Monitor that the shelling was a war crime, “What happened falls within the legal description that targeting civilian homes or persons is a war crime punishable under international law.” He rejected the presence of gunmen in civilian areas as a justification, placing responsibility squarely on the people who ordered the attack against a market full of tradesmen and other civilians.

A few hours after the news of a massacre in Hamouriya circulated, the commander of Jaish al-Islam, Zahran Alloush, threatened in a tweet that “the capital, Damascus, will be targeted on Sunday, Jan. 25, with hundreds of rockets on a daily basis, in response to the targeting of cities and towns in eastern Ghouta by [Syrian President] Bashar al-Assad’s warplanes.”

Alloush demanded that “Muslims” in the capital stay at home, reflecting that his threats were made against the rest of the sects living in Damascus — particularly Christians living in the old city of Damascus and Bab Sharqi, and Alawites who live in different parts of Damascus, particularly the Mezze 86 neighborhood in the center of western Damascus.

Alloush wrote in another tweet: “The artillery brigade is preparing to launch a campaign of missiles on the capital, and hundreds of Katyusha, 107, Sahm (Arrow) al-Islam-3, 20 Grad and 40 Grad" rockets would be dropped on the capital, Damascus, every day.

He said the campaign comes “in response to the regime’s barbaric aircraft shelling on our people in the blessed Ghouta. To protect the lives of the Muslims who reside in the capital, it is forbidden to wander, go to work or roam in the streets on Sunday, the day after tomorrow.”

Anticipation prevailed in the streets of Damascus on Jan. 24 following Alloush’s threats, but they did not affect the movement in a city that is used to shells being dropped. The anticipation continued until Jan. 25, as a series of explosions began; the first mortar shell was dropped in Arnous Square in the center of Damascus in the middle of the day, but that did not affect the people’s movement in the streets. This was followed by 90 rockets and bombs being dropped in most parts of Damascus, mainly in the center of the capital, which resulted in 11 people killed and 70 others injured, including 19 children, according to activists and reporters on the ground.

The rocket attacks by Jaish al-Islam against the capital did not succeed in halting the regime’s warplane raids on Ghouta’s cities, which in turn increased in response to Jaish al-Islam’s attack on Damascus.

Jaish al-Islam’s campaign did not reach its declared objective of targeting the government forces' headquarters and positions. Thus, the only achievement is that the opposition’s rockets reached, for the first time, a wide area in Damascus.

On Jan. 25, Alloush ended the curfew in his last tweet, and the shelling on Damascus was suspended until further notice. This was accompanied by a news conference during which he said, “The death toll resulting from the rockets campaign exceeded 10 people, including high-ranking officers from the regime.” However, pro-regime media outlets did not report anything in this regard.

Alloush said the chief of staff declared that the rockets — which were made in the defense factories of Jaish al-Islam — were ready to use, only after the testing was done and after the group made sure that the rockets hit 95% of the targets.

For their part, pro-regime media outlets reported that the targeted areas were civilian areas, and denied that security headquarters were hit by these rockets or that civilians were killed and injured during the rocket campaign.

Looking at the capital's streets at night after the shelling stopped, any resident of Damascus could see that the many security buildings, which are adjacent to civilian buildings, were still intact. It is thus impossible for any bomb to be dropped without being close to any security or government position. This is the only justification for the opposition gunmen when a bomb is dropped on a residential building.

Between the pro-regime and opposition media outlets reports, civilians in Damascus and Rif Dimashq remain the biggest losers in a war where there is no winner. Another long day in Damascus was preceded by many other long days, and many victims and injuries. The days in Damascus will remain long and sad as long as this war continues.