Civilians in Syria's Eastern Ghouta hoped for a full implementation of the cease-fire and access to humanitarian aid, but regime forces have continued missile strikes under the pretext that extremist groups remain. 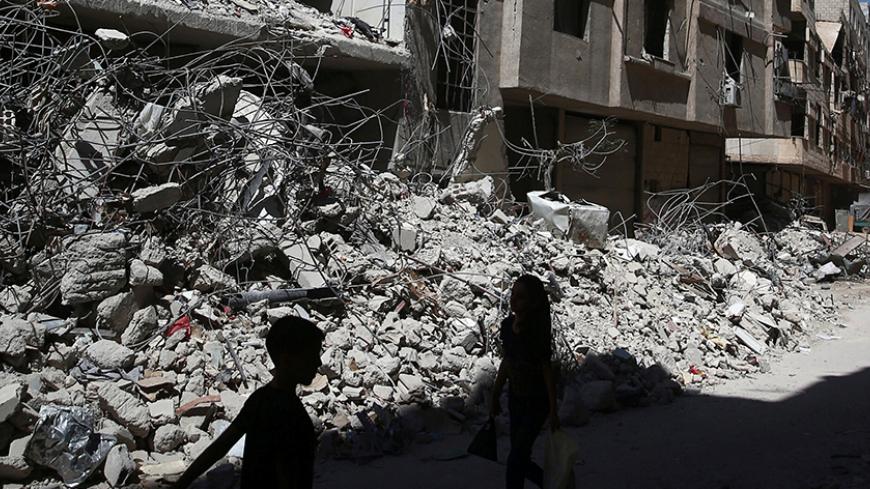 Children walk past the rubble of damaged buildings in Ein Tarma in the Damascus suburb of Eastern Ghouta, Syria, July 19, 2017. - REUTERS/Bassam Khabieh

The Syrian Observatory for Human Rights reported that four people were killed and 13 others were wounded in Ein Tarma in Eastern Ghouta on Aug. 1 in the wake of the ground-to-ground shelling and air raids that targeted the town.

According to the Observatory, 25 civilians have been killed, including seven children and seven women, while 145 people have been injured since the cease-fire agreement went into effect July 22. Fierce battles between the regime forces and the armed opposition were raging while the shelling and air raids went on in Jobar neighborhood in the east of Damascus and in Ein Tarma, where the regime forces are trying to tighten their grip to cement the blockade on Eastern Ghouta.

The regime forces and militias supporting them launched June 19 their military campaign on Eastern Ghouta under the pretext of fighting members affiliated with Hayat Tahrir al-Sham, an alliance of jihadi factions that include former al-Qaeda affiliate Jabhat Fatah al-Sham (formerly known as Jabhat al-Nusra). It is noteworthy that all cease-fire deals between the armed opposition and the regime forces do not include Hayat Tahrir al-Sham and the Islamic State (IS). Despite its justifications, the Syrian regime’s intentions were clear to the citizens of Ghouta even before the cease-fire went into effect.

Media activist in Eastern Ghouta Saria Abu al-Baraa told Al-Monitor, “When the truce was declared, people felt optimistic and thought the situation would improve. Even the Sham Legion and Jaish al-Islam, the two biggest factions in Eastern Ghouta, welcomed the agreement and announced their commitment to it. But on the next day, July 23, we were surprised with cannon balls, missiles and air raids on Harasta, Ein Tarma, Arbeen and Douma, and the shelling goes on.”

She added, “The Syrian regime and its Russian allies claim there are militants from HTS [Hayat Tahrir al-Sham] in Ghouta. But, in fact, there are barely 200 of them, and they are nothing compared with the number of rebels in Ghouta who are estimated [to be in the] thousands. What kind of Sharia allows the destruction of cities and villages and the killing of innocent civilians, including men and women, to fight 200 militants who do not affect the military balance of power in Eastern Ghouta? We can see everything clearly. The regime wants to control Jobar neighborhood and Ein Tarma to starve the remaining citizens in Ghouta, and Russia is its partner in crime.”

The military factions in Eastern Ghouta represented by Jaish al-Islam and Al-Rahman Legion (Faylaq al-Rahman) proposed to Hayat Tahrir al-Sham the option of disbanding itself and joining one of the two factions or leaving Ghouta toward Idlib with guarantees from the Syrian regime and Russia to spare Ghouta more destruction and bloodshed. Hayat Tahrir al-Sham issued a report Aug. 1 declaring its willingness to disband itself, provided that all factions in Ghouta merge into one. Negotiations about disbanding Hayat Tahrir al-Sham are ongoing, but there are no developments so far.

The daily escalation on Eastern Ghouta cities and towns forced civilians, mainly in Ein Tarma and Kafar Batna, to take to the streets July 28 to demand Hayat Tahrir al-Sham leave Ghouta. The protesters condemned the shelling targeting civilians, and they considered the presence of Hayat Tahrir al-Sham in Ghouta an alibi for the Syrian regime and Russia to commit more atrocities and destroy what is left of the infrastructure in Eastern Ghouta.

Omar al-Dimashqi, an Eastern Ghouta citizen, told Al-Monitor, “We no longer buy the regime’s excuses to shell and destroy cities and kill people by claiming that Jabhat Fatah al-Sham and IS are hiding [among] civilians. We staged protests and asked HTS to disband itself or leave Ghouta so that the regime and Russia run out of pretexts. But we are well aware that the regime has been wanting to take control of Ein Tarma and Jobar neighborhood for a while. The regime wants to impose a semi-complete siege on Ghouta so that military factions will not even think of striking its positions in Damascus in the future. We are protesting because we want to live in peace. We cannot take death and destruction anymore. The war has drained us.”

Civilians in Eastern Ghouta hope for an effective implementation of the cease-fire and the allowing of access to humanitarian aid and letting civilians enter and leave Ghouta. The regime and militias supporting it have been besieging the city since Oct. 20, 2013. Citizens hope their lives will change after the cease-fire, which gave them a silver lining to break free from the hell they have been living in for five years.