Displaced Syrians and Aleppo natives alike are living in fear that the Syrian regime and its allies will invade their last refuge and set off a humanitarian catastrophe. 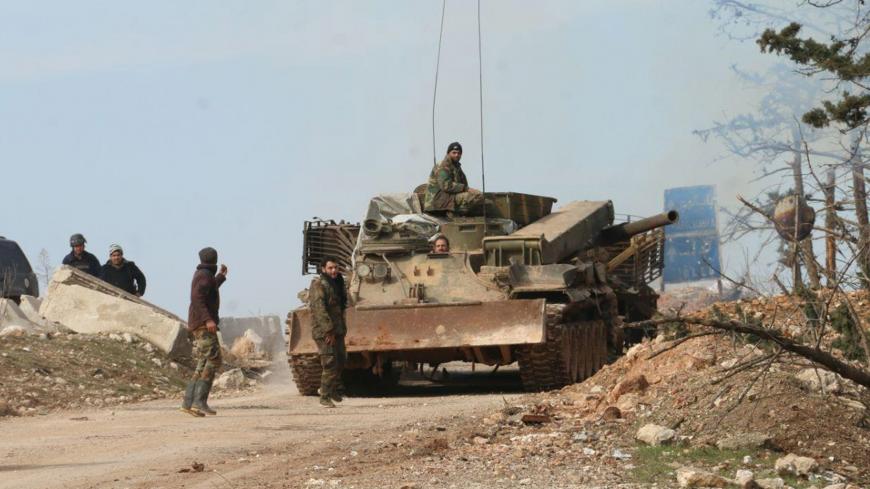 ALEPPO — Syrians living in the areas held by the Turkish-backed opposition in northern Aleppo have been living in constant worry since Syrian regime forces and their allies made significant advances in the northwestern province of Idlib in the past two months.

There have been rapidly progressing attacks by the regime forces backed by heavy Russian air support and systematic bombing and destruction of the opposition-held cities and towns on both sides of the M5 highway linking Aleppo to Damascus. Syrians in northern Aleppo fear they will face a similar fate should the regime forces move toward them after achieving their goals in Idlib.

Mohamad Rasheed, an activist reporting for local news outlets in northwestern Syria, told Al-Monitor that the regime forces and their allies are frightening civilians in the areas they took control over in the Idlib and Aleppo countryside with such atrocities as desecrating graveyards.

The Euphrates Shield and Olive Branch areas are now home to a large number of displaced people who fled the regime forces’ shelling in the Idlib countryside and the western countryside of Aleppo during the months of February and January. They settled in several cities including al-Bab, Marea, Azaz and Afrin as well as in the border camps, where the population density has increased significantly.

The Euphrates Shield and Olive Branch areas also house thousands of people displaced from the northern countryside of Homs and later from eastern Ghouta, eastern Qalamoun and southern Damascus, as well as from the Daraa province during 2018. Should the regime forces carry out a military operation there, a humanitarian catastrophe could be unimaginable.

Rami al-Sayed is a photojournalist working for AFP who was displaced from southern Damascus and now resides in the city of Afrin. He told Al-Monitor, “The Euphrates Shield and Olive Branch areas have become a haven for the two million civilians who have been displaced by the oppression of the regime forces and the militias backed by Iran and Russia from the various Syrian provinces. These areas are their last resort and if the Assad regime and its allies invade, there will be genocide.”

Sayed added, “We were displaced from Damascus to the countryside of Aleppo because we refused to live in the confines of the regime. We could never and would never do that. The Assad regime and the Iranian-backed sectarian militias fighting alongside it pose a serious threat to the pro-opposition Syrians. Assad’s forces and their allies cannot be trusted — take the arrests they carried out in several areas after reconciliation deals with the regime despite Russian and Iranian guarantees. Many were even recruited to fight against the opposition.”

Mohammed Bakkour, a teacher in the city of Marea north of Aleppo, told Al-Monitor, “If the greed of the Assad regime and its allies leads them toward the Euphrates Shield and Olive Branch areas in the Aleppo countryside, I will not be able to survive because I participated in the peaceful revolutionary movement against the regime, and so I am at risk of being killed or arrested if I stay here. There is no way I would live in an area controlled by the Assad forces, so I will be looking for [another] place where I can live with dignity.”

Bakkour explained, “The Assad regime is assisted by brutal sectarian militias backed by Iran and other militias supported by Russia that are no less criminal, so millions of people are threatened with genocide, and they have every reason to worry about their fate. The international community must stop the massacre in Idlib first so worse doesn't happen later on in other areas.”

Mahmood Talha, a journalist who works with Thiqa News Agency, told Al-Monitor, “I do not expect the regime forces to attack the Olive Branch and Euphrates Shield areas because Turkey will not abandon the two areas so easily."

Talha added, “The impact of the Idlib battles on the economic situation in the Euphrates Shield and Olive Branch areas has been great. But popular opposition circles in Aleppo countryside believe that the regime and its allies, Russia and Iran, want to control all of Syria and that no area will be spared from their greed.”

Amer Abdel-Rahman from the city of al-Bab in eastern Aleppo works in the clothing industry. He told Al-Monitor, “Fears that the regime forces will invade all opposition areas in northwestern Syria have affected market movement. My business is barely surviving; instead of buying ready-made clothes, people save money for what is more important, such as living expenses and perhaps at some point displacement from the area if the Assad regime forces advance.”

Abdul Malek Harraj, who studies English literature at the University of Aleppo, fears for his future if the regime forces continue to invade the opposition areas. “The battles of Idlib affected us as students. We are worried about our fate, and I personally fear losing my education. I cannot stay here if the regime forces advance. I will be arrested and forced to serve in their ranks,” he told Al-Monitor.

Lawyer Youssef Hussein is a member of the Syria Free Bar, an independent syndicate of lawyers who oppose the Syrian regime, told Al-Monitor, “People in the Euphrates Shield and Olive Branch areas live in a state of fear and panic, since their places of residence are at risk. They hope for a safe area where they will not be bombed and killed, because all Syrians who oppose the regime now live here as they are unable to migrate abroad since the Syrian-Turkish border is closed.”