The Syrian government has taken control of the Damascus-Aleppo highway for the first time in eight years, but the cities and towns along this critical M5 have been devastated by the regime's brutal march toward victory. 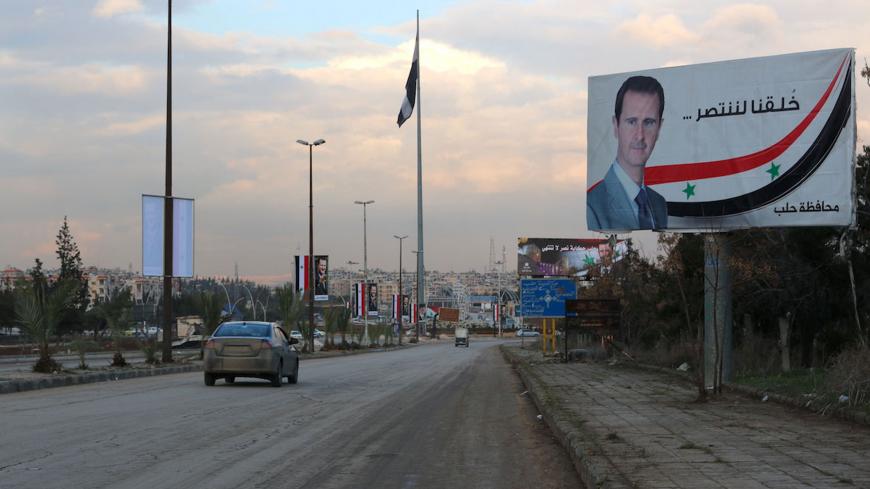 ALEPPO — The good news is that the Syrian government reopened the crucial M5 highway connecting Damascus and Aleppo to commercial buses and trucks Feb. 22. But regaining control of the route from opposition forces has uprooted about a million people since December — many of them for the third or fourth time.

“Nothing can describe the humanitarian catastrophe caused by the regime forces,” said Mayas Doghaim, who was displaced from the ​​Maarat al-Numan area southeast of Idlib. Doghaim, who works for Al-Hayat University for Medical Sciences, told Al-Monitor, “The regime forces and their allies are the undisputed barbaric invaders of our modern era. People who had a home and a roof over their heads are today homeless, left only with memories in displacement camps.”

Since 2012, the M5 has been controlled by various rebel groups. President Bashar al-Assad's regime started regaining parts of the highway in 2014, but only during the latest offensive was it able to take full control.

Regime forces and armed groups backed by Russia and Iran took over the M5 on Feb. 10 after beating the opposition south and west of the city of Aleppo. On Feb. 15, the regime began repairing the road and by Feb. 22, the Syrian Ministry of Transportation announced the highway was officially open to traffic and "at the full disposal of citizens."

The M5 is one of the most important land routes in Syria, connecting the country's largest cities. Since 2012, the regime has had to rely on longer alternatives via secondary roads.

Though it's of strategic importance to the Assad regime, the 280-mile (450-kilometer) M5 has been a curse for hundreds of thousands of people in villages and towns along the road in rural areas of Aleppo and Idlib provinces. The regime's latest offensive, which began in May, forced them to flee.

By August, the regime controlled areas in northern Hama province and the city of Khan Sheikhoun, south of Idlib. It recaptured Maarat al-Numan on Jan. 28. In mid-February, regime forces advanced to seize more villages in western Aleppo province.

Al-Monitor met Mohammad Hallaj, director of the Syrian Response Coordinators team in Syria, who said, “There are still no reliable statistics on the numbers of displaced people who fled the area on both sides of the M5 highway in the countrysides of Idlib and Aleppo. But the number is definitely more than a million.”

He added, “It's well known that a large number of villages, towns and farms have been emptied of their inhabitants since regime forces took control of the area. Add to this, regime forces have bombarded people's homes and properties in aerial and ground attacks. They also destroyed most service facilities such as hospitals and schools … causing a great tragedy to hundreds of thousands of people who were displaced from their homes to the camps north of Idlib and Aleppo.”

Mahmoud Talha from western Aleppo province, a correspondent for several local news agencies such as Sham News Network and Thiqa News Agency, told Al-Monitor, “Throughout the years of the Syrian revolution, the wave of displacement from both sides of the M5 highway is by far the most substantial. Huge numbers of people have fled their homes for the unknown, leaving behind their dreams and memories. It's unbelievable that the world is standing idly by, watching this human tragedy in 2020.”

The war has uprooted an estimated 13 million people since it began in 2011. Hundreds of thousands have died.

Abdel-Raouf Ahmed, displaced from western Aleppo, is currently residing in al-Bab in northeastern Aleppo. “I lost my house," he told Al-Monitor. "I heard after we fled that Russian planes destroyed it almost completely. I lost all hope of returning to my hometown as long as the region remains in the grip of regime forces. I am now searching to rent a place to live with my family.”

Maj. Yusuf Hammoud, spokesperson for the opposition's Syrian National Army, told Al-Monitor, “The objectives of the Assad regime go far beyond controlling the M5 highway. This is manifested in the policy of systematic destruction and displacement during the regime's latest offensive. The regime has been pursuing a retaliatory policy ever since the Syrian revolution erupted."

He noted that Russia, Assad’s staunch ally, seeks to control all of Idlib and perhaps the entire area currently outside the regime's control. “Russia wants Assad to remain at the helm and push the opposition outside Syria, even if that means millions of people."

Sahel Abo Abdel Rahman, a photojournalist who was displaced from western Aleppo, told Al-Monitor that the majority of people uprooted by the regime along the M5 highway were unable to take much of anything with them.

“They were forced to flee amid intensive shelling and a scarcity of transport trucks,” he said. “The regime forces stole civilians’ properties, from shops to homes. This is part of the Assad regime’s policy of displacement, destruction and systematic impoverishment of hundreds of thousands of Syrian civilians.”

Abdel-Wakeel Chahoud, a teacher who had to leave Kafr Nabl, south of Idlib, blames Russia for the chaos. “The goals of the regime’s allies are not limited to the [M5], but extend to the entire province of Idlib.”

Chahoud concluded, “The world must put an end to our suffering and save us from Russia and Iran.”