The Turkish-backed Free Syria Army in the northern countryside of Aleppo denies building a wall to isolate Azaz and claims that the wall is aimed at protecting the road between Azaz and Afrin from attacks by Kurdish forces and Syrian regime forces. 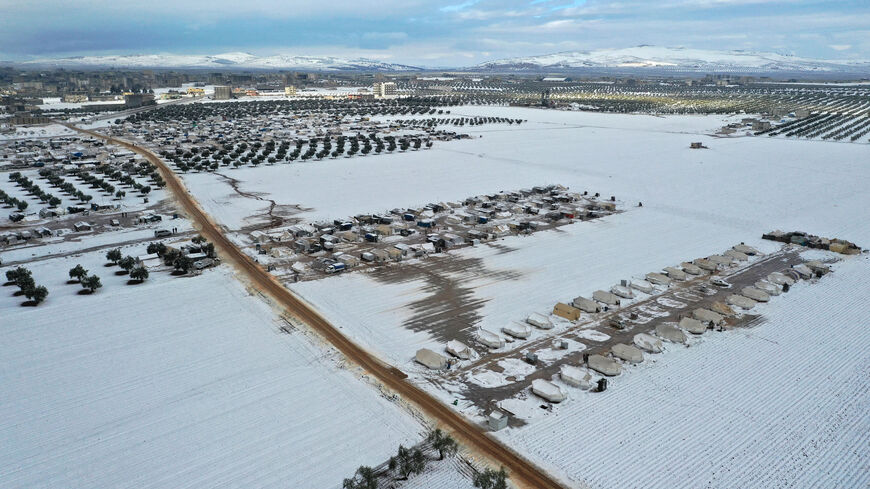 An aerial picture shows a camp for internally displaced people covered in snow, Azaz, in the rebel-controlled northern countryside of Aleppo province near the border with Turkey, Syria, Jan. 19, 2022. - Aref Tammawi/AFP via Getty Images

ALEPPO, Syria — Media outlets close to the Syrian government have recently accused the Turkish army of isolating the city of Azaz from the cities where the government forces and the Afrin Liberation Forces of the Kurdish People’s Protection Units (YPG) are deployed in the northern countryside of Aleppo.

On Jan. 13, the Athr Press website quoted anonymous sources as saying, “The Turkish forces brought a large number of cement blocks into the city of Azaz, which is under their control in the northern countryside of Aleppo, in order to build a buffer wall around the city.”

It noted, “Cement blocks as well as various heavy machinery were brought into the city of Azaz and directly were transferred to the Azaz-Afrin road near the villages where the Syrian army units and allied forces are deployed. The concrete blocks are approximately 4 meters [13 feet] high.”

The site continued, “The Turkish forces have claimed that the new cement wall comes as a purely defensive means aimed at protecting the city against any possible attacks, especially the sporadic attacks of the Afrin Liberation Forces that are stationed in pockets spread between Afrin and Azaz.”

The report added, “The reality on the ground proves that the Turkish move only serves one purpose, which is to completely isolate the areas under its control from Syrian territory. This goal has been evident over the past years either through the continuous Turkification policy that Ankara is implementing [inside Syria], or through the buffer walls that it continues to build from time to time.”

On Jan. 13, Sham FM radio, which is close to the Syrian government, quoted its correspondent in Aleppo as saying, “The Turkish forces are beginning to build a concrete barrier on the outskirts of the city of Azaz, separating the city under their control from the other areas of the Syrian government in the northern countryside of Aleppo.”

The Syrian government forces and the YPG-affiliated Afrin Liberation Forces are deployed in the Tel Rifaat area and a number of villages adjacent to the Azaz area in the northern countryside of Aleppo, which is under the control of the Turkish-backed Free Syrian Army (FSA). The government forces have previously beefed up their military presence in the area following threats by the Turkish army of starting a battle against Kurdish forces.

Al-Monitor visited the location that the Syrian government media website said the Turkish army had built a buffer wall in. The site is located on the western side of the city of Azaz. A main road linking Azaz to the city of Afrin in the northern countryside of Aleppo passes through it.

Only 2 kilometers (1.2 miles) separate this road from the battle fronts with the government and Kurdish forces in the Tel Rifaat area. Al-Monitor saw a concrete wall recently built by the Turkish army. It is about 1,500 meters (1 mile) long and 3 meters (10 feet) high.

It seems the wall is built in a way to protect the road between Azaz and Afrin from the bombings of the government and Kurdish forces that have repeatedly targeted this road and carried out ground attacks against the FSA.

The bombings carried out by the government and Kurdish forces has often caused the road to be blocked and hit military vehicles belonging to the FSA and Turkish army.

Meanwhile, on Jan. 20, at least four people were killed in attacks on Afrin, which Turkey blamed on Kurdish forces.

Youssef Hammoud, spokesman for the Turkish-backed FSA, told Al-Monitor, “The FSA factions, with the help of the Turkish army, built a concrete wall facing the Shatt checkpoint, located at the center of the road connecting Azaz with Afrin. It is a road that is exposed to the Kurdish and regime forces stationed near the area, and this wall will protect people and soldiers taking this road.”

He said, “The buffer wall is small and only stretches over a short distance not exceeding 1,500 meters. It is made up of prefabricated concrete blocks that can be removed at any time when they no longer serve their purpose.”

Hammoud denied “that the wall separates the areas under the control of the FSA from the rest of the Syrian areas,” and said that those are “areas occupied by Kurdish and regime forces, and we have the right to expand and control the areas they occupy.”

He noted, “The concrete blocks serve the same purpose as the earthen berms that are usually piled up in the lines of contact between us and the enemy forces to protect our soldiers. The enemy forces, meaning the regime and Kurdish forces, have targeted missiles. Should these missiles detect a moving target, they hit it. But when there is a wall or stocks of berm, they cannot see such a target. This procedure will be followed on several other fronts during the coming period."

Muhammad al-Sukari, researcher in Syrian affairs based in Gaziantep, told Al-Monitor, “Turkey wants to completely secure the Syrian areas under its control from any attacks or potential security breaches, especially in light of the recent bombings in the cities of al-Bab and Azaz, as well as the bombing and infiltration attempts that the Kurdish and regime forces sporadically carry out against soft targets on the fighting fronts in the northern countryside of Aleppo.”

He said, “This measure [the wall] comes at a time [the Turkish army and its Syrian allies] are currently unable to handle the security in Syria in the presence of several local forces that oppose the Syrian opposition and the Turkish presence in Syria. This measure seems to point to a shift in the Turkish approach to the military option that seems to be on hold for now. The current goal of the wall may be to distract the Kurdish and regime forces, but it is a precautionary security measure rather than a political one.”

The Turkish army is seemingly looking to boost the defenses of the FSA, which it supports in the northern countryside of Aleppo, against the government and Kurdish forces stationed in the Tel Rifaat area. Buffer walls are expected to be built near the fronts in several locations during the coming period to reduce the losses of the FSA factions and the Turkish army.