Residents of the Kurdish autonomous administration in Syria are complaining about the lack of sufficient precautionary measures to stop the spread of coronavirus. 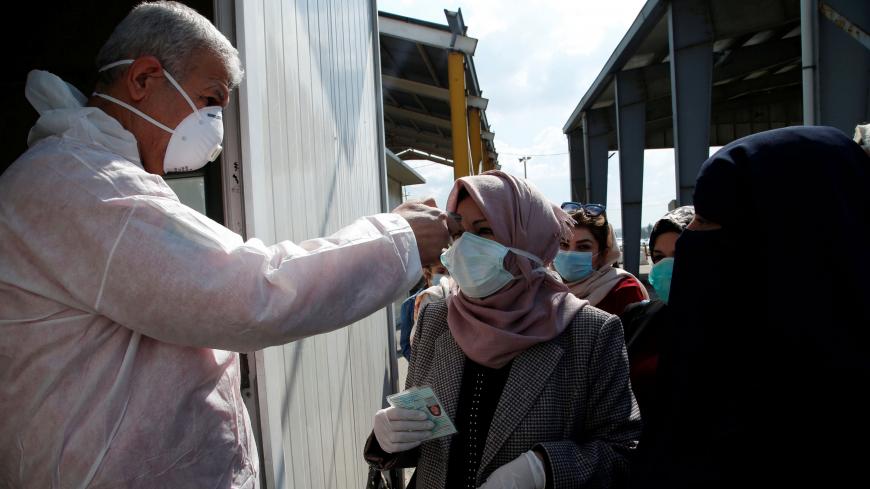 A member of the medical team checks the temperature of a woman, following the coronavirus outbreak, at the entrance checkpoint of Erbil, Iraq, March 2, 2020. - REUTERS/Azad Lashkari

QAMISHLI, Syria — A health official in Syria's northeastern Jazira province told Al-Monitor that no cases of coronavirus have been documented in the province. Yet residents of the largely Kurdish region, governed by an autonomous administration, are not reassured by local officials' measures to protect the province from coronavirus, which has led to the deaths of 4,000 worldwide.

A Kurdistan TV report from Qamishli, the largest Kurdish city in Syria, stated that 1% of the population in Qamishli is wearing protective masks, as pharmacies and medical equipment sales centers are running low on masks.

Hani al-Ali, the owner of a medical equipment store, told Al-Monitor, “The use of health masks was the preserve of medical staff and family members seeking to prevent the spread of a certain virus, but after the spread of corona around the world, a lot of people sought to buy large quantities of masks, which caused a significant decrease in their numbers and an increase in their price.”

Pharmacist Amer Abdullah told Al-Monitor, “The price of masks increased by 250% as it ran out in several shops and pharmacies.”

Rapren Hassan, the co-head of the Health Authority in Jazira province, told Al-Monitor, “No cases of coronavirus have been thus far registered in northeastern Syria.”

She said, “The symptoms include shortness of breath, dry cough, high fever and a cold. These are common symptoms for all infected people.”

She said, "The medical staff first takes the temperature of individuals. Those suspected of being infected get transferred to special centers for tests and monitoring. In case their infection is confirmed, they get transferred to quarantine.”

Hassan said, “We suspected four cases and contacted the Syrian Health Authority, which, in turn, contacted the [World Health Organization] and completed the required examinations. The four cases tested negative. Also, the authority distributed informative brochures on how to prevent the virus and inform people of the required hygiene methods. In case of suspicion, the Syrian Health Authority contacts the WHO to take the required action.”

But residents are uncertain that the measures taken by the autonomous administration are sufficient.

The autonomous administration said medical and humanitarian materials will be allowed to flow through the border crossing every Tuesday, the media spokesperson at the Semalka crossing, Sherzad Uthman, told local media.

Fawzi said the adopted measures are “incomplete and inadequate. It is true that many European countries have contracted the virus, but are we waiting for the virus to hit us to get to work? A precautionary plan must be established. Gatherings must be banned and markets must be continuously disinfected. Also, places that witness gatherings must be regularly examined.”

Hassan said, “Just like the rest of the world, we do not have the required medicine for the virus, and we have not detected any cases thus far, but if any cases are detected in Syria, we will close schools and universities and ban gatherings.”

Journalist Solin Mohamed Amin, based in Qamishli, believes that the autonomous administration is falling short of taking precautions to ward off the virus.

“The issue is not taken seriously or treated as a threat to humanity," Amin said. "Distributing brochures that explain the causes of the virus without drying up its sources is not enough. Awareness campaigns are needed in schools, institutions and public places to explain how the virus spreads. Also, advanced detection devices are needed and no cases should be hidden for political and security reasons. Smuggling should be fought.”

Residents of Qamishli are going about their normal lives, with no interruptions to social gatherings and market activity, which bodes ill for the spread of the virus, as it could be lurking in nearby villages.