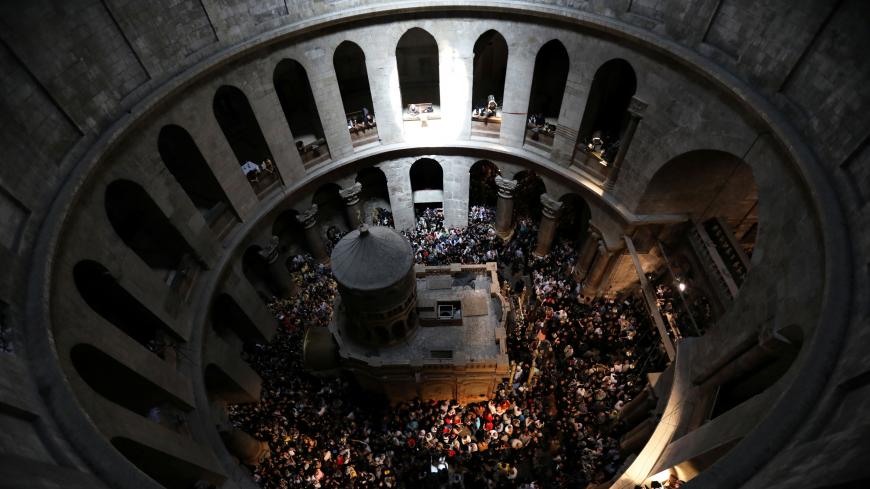 “The conference aimed to create a network between the Russian and Palestinian tourism sectors, as well as enhancing their cooperation to increase the number of Russian tourists visiting Palestine each year, from about 380,000 to 1 million in 2019,” Jaris Qamseya, spokesman for the Palestinian Ministry of Tourism and Antiquities, told Al-Monitor.

Qamseya noted that more than 90% of tourism to Palestine is Christian religious tourism, which targets sacred sites such as the Church of the Nativity in Bethlehem and the Church of the Holy Sepulchre in Jerusalem. Russian nationals make up the majority of these visitors, followed by Poles, Romanians, Americans and Italians.

Russia’s former Prime Minister Dmitry Medvedev praised the Greek Orthodox heritage in Palestine in an article published by the local Wafa news agency in November 2016. “There are places in the world that you cannot visit without being affected by their abundance of cultural treasures,” he wrote. “Among these is the holy land of Palestine — the cradle of civilizations and religion and a site of historical memory.”

Issa Bashara, a local tour guide in the city of Bethlehem, told Al-Monitor, “The most significant sites attracting Christian tourists are places associated with the life story of Jesus Christ. These include the Church of the Nativity and Milk Grotto in Bethlehem, the Mount of Temptation or Monastery of the Temptation in Jericho, where Jesus spent 40 days fasting and meditating, as well as the Church of the Holy Sepulchre in Jerusalem that contains the tomb of our Lord Jesus Christ.”

He said that many of the historical Russian churches are also tourist destinations — for instance, the Russian Orthodox Church, also known as the Church of the Ascension, which was built in 1871 around a famous 5,000-year-old oak tree and which is the only church in the city of Hebron in the southern West Bank. Also significant is the Church of Mary Magdalene in Jerusalem, an Orthodox Russian church constructed in 1888.

Qamseya explained, “For years we lamented that many tourists would come to Palestine for just a few hours, visiting their religious sites and then leaving without even staying the night. The reason for this was the absence of a Palestinian tourism infrastructure. But today, in partnership with the Palestinian private tourism sector, we are promising visitors a rich experience by developing new types of tourism alongside traditional religious tourism.”

These new possibilities, he noted, would center on the establishment of tourism routes and ecotourism, aiming to introduce visitors to the biodiversity in Palestine, as well as cultural tourism around ancient historical cities such as Jericho, traditional markets and museums.

Qamseya pointed out that Palestine’s tourism sector now has a sizeable infrastructure, including some 250 hotels in the Palestinian territories with a capacity of 10,100 rooms, and thousands of hostels, restaurants and shops selling handicrafts.

In addition, some municipalities have refurbished historical homes into guesthouses, while also training hundreds of new tour guides and local Palestinian families to host tourists in their homes in order to share aspects of Palestinian daily life.

Qamseya noted that Palestine is constantly seeking to open up new tourist markets. In 2018, an increase in tourists from China and India was seen, and future efforts to attract tourists from Latin America are underway.

“Tourism is significant for the Palestinians economically, contributing 13%-15% of its gross domestic product of $13.8 billion in 2018,” said Naser Abdel Karim, professor of economics at Birzeit University in Ramallah. He told Al-Monitor, “Yet tourism is also an important means of raising awareness among visitors of the historical injustice suffered by the Palestinians at the hands of Israel’s continued occupation.”

The growth of the tourism sector means new investments in the Palestinian territories, Abdel Karim said. This will in turn produce more revenue for the Palestinian Treasury and help revive the local economy by providing employment opportunities at a time when Palestinian society is suffering from an unemployment rate that reached 31% at the end of 2018.

Abdel Karim concluded that the ongoing Israeli occupation represents the primary obstacle to tourism growth. Palestine’s tourism industry continues to be promoted in the absence of any control over its borders and crossings, any Palestinian airports or ability on the part of the Palestinian Authority to issue visas to enter Palestine.