Jericho entices tourists with Mount of the Temptation

The Monastery of the Temptation, where Jesus allegedly spent 40 days, is under consideration for UNESCO's World Heritage List as local officials push sites for religious tourism. 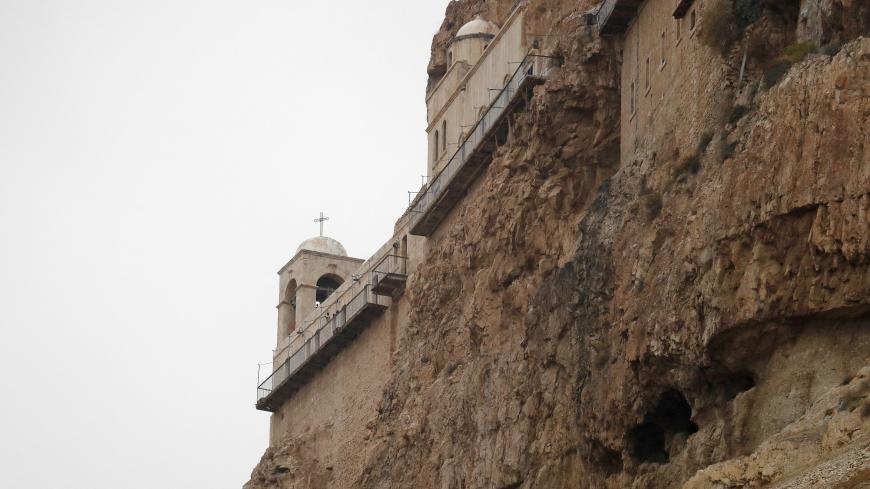 A view of the Greek Orthodox Christian Monastery of the Temptation near the West Bank city of Jericho is seen in this photo taken Dec. 8, 2019. - AHMAD GHARABLI/AFP via Getty Images

The Mount of the Temptation sits 350 meters (1,150 feet) above sea level in the middle of a desert extending between Jerusalem, Jericho and the Jordan River. Its name refers to the time Jesus allegedly went off to a mountain to pray and was tempted by the devil. It is also called Jabal al-Quruntal or Monastery of the Temptation built the Byzantines in the sixth century AD. After the Crusaders occupied the monastery, two churches were built, one in a cave and another on the top of the mountain.

The West Bank city of Jericho, one of the oldest cities in the world, sits 250 meters (820 feet) below sea level. Visited by Palestinians and tourists from all over the world, it is home to many archaeological sites, including Hisham’s Palace, which boasts a huge mosaic floor and several monasteries, including Deir Hajla and Deir Wadi Qelt.

Mohammad Jaradat, director of archeological sites at the Palestinian Ministry of Tourism and Antiquities, told Al-Monitor, “The mountain is considered a unique architectural masterpiece, as it includes corridors, rock caves deep inside the mountain and the monastery, part of which hangs in the air while the other part is carved into the mountain.”

He said that the Monastery of the Temptation is religiously important to Christians, who believe that Jesus stayed in a cave located under the monastery. The Christian narrative says that after John the Baptist baptized Jesus in the nearby Jordan River, Jesus went off to this mountain and Satan followed him. The events are detailed in the Gospel of Luke, in which Jesus told Satan, “Man shall not live on bread alone.”

Jaradat said, “The monastery is full of religious landmarks such as crosses, sculptures of Christ — peace be upon him — and paintings drawn on the monastery’s ceiling, and the cracks in the monastery walls are filled with wishes that visitors write on small scraps of paper in the hope they would be fulfilled by the lord. The monastery is supervised and managed by the Greek Orthodox Patriarchate, and it is currently inhabited by four monks who receive visitors from all over the world.”

The director of the Department of Tourism and Antiquities in Jericho, Iyad Hamdan, told Al-Monitor that the Monastery of the Temptation was founded by Archimandrite Ephramius in 1892 AD, and when the Crusaders took control of the monastery during the year 1099 AD, they called it “Jabal al-Arbaeen.”

He added that after a number of Palestinian archaeological sites were registered on UNESCO's World Heritage List, work is now underway to include the monastery as well.

Hamdan continued, “The eastern side of the mountain has 36 caves that were inhabited by monks in the early days of Christianity. The place is full of historical and religious significance for the eastern and western Christian sects. To this day, some Christian visitors, hermits and monks refuse to ride a cable car to reach the monastery at the top of the mountain, as they prefer to walk the whole way in honor of Christ, peace be upon him.”

Hamdan went on, “The Ministry of Tourism and Antiquities is interested in the Islamic and Christian archaeological sites to boost tourism in Jericho and the Palestinian territories, as the monastery attracts tourists and pilgrims from all over the world. Religious tourism to archaeological sites in Palestine accounts for 62% of Jericho's total annual tourism.”

Marwan Sinokrot, director of the Sultan Tourist Center in Jericho, told Al-Monitor, “The cable car, which travels a distance of 1,400 meters at 177 meters above sea level, was built in 1998 with the aim of attracting tourists in Jericho in particular and the Palestinian lands in general," explaining that it's in the "Guinness Book of Records as the longest cable car in the world below sea level.”

He continued, “There are 12 cable cars capable of transporting 700 passengers in one hour, and the lower station of the cable car includes a restaurant that can accommodate hundreds of people as well as several Oriental antique shops."

Sinokrot said that the region is witnessing a tourism boom from several European and Islamic countries such as India, Malaysia, Germany, Italy and Indonesia.