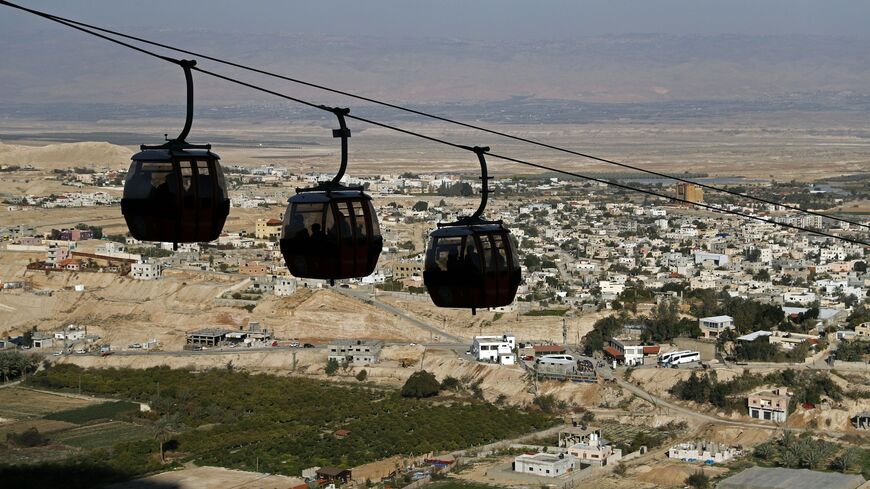 Cable cars bring tourists to the Mount of Temptation with the West Bank city of Jericho in the background on Feb. 18, 2017. - THOMAS COEX/AFP via Getty Images

Winter finally arrived in Israel last week, sending vacationers to warmer destinations. A new one is drawing the attention of Israeli tourists over Eilat in the south and the popular Dead Sea resorts: the West Bank town of Jericho.

Jericho's weather is pleasant, even in winter, and it is close to religious and other tourist attractions, including the Dead Sea, Jerusalem and the baptismal sites along the Jordan River. The tourism website Tripadvisor offers a selection of visit-worthy sites for Christians, Muslims and Jews, not to mention archeological attractions, fine dining and places to unwind. It would be a real tourism gem were it not for the Israeli-Palestinian conflict.

One of the sites is Hisham’s Palace, an archeological compound dating back to the Muslim Ummayad dynasty. It includes a magnificent mosaic floor uncovered just five years ago and renovated at a cost of $12 million, donated by the Japanese government.

According to Christian tradition, the hill rising above the city is the Mount of Temptation, where Satan tried to tempt Jesus for 40 days. The Monastery of the Temptation was first built in the fourth century AD by a monk named Haritun. It is accessible by the Palestinian Authority's only cable car — which is also the longest such ride below sea level in the world. Outside the city is an ancient synagogue, dating to the seventh century AD.

Some of the most successful hotels and restaurants in the Palestinian territories can be found in Jericho. New neighborhoods boast high-end villas and swimming pools used by Palestinian elites as vacation homes. Many villas with hot tubs and other amenities that can be rented for weekends and longer holidays.

Jericho entered a golden age after the signing of the Oslo Accords. The Oasis Hotel and Casino was built as a joint Palestinian-Israeli-European initiative. Since casinos are banned in Israel, it soon became a popular site for Israelis who came to gamble and stayed to visit the nearby tourist sites, restaurants and markets. But everything changed in 2000 during what is now known as the second intifada. The military clashes and terror attacks culminated in the IDF blewing a hole in the hotel after snipers fired at Israeli troops from its top floors.

The hotel was rebuilt once quiet was restored, but Israelis continued to avoid the site. The city remained popular with international tourists as a stop on tours of the area that took them from Jerusalem and Bethlehem to the Dead Sea. The novel coronavirus paused those visits, but in the last few months tourists have slowly starting to return to the city, with Arab-Israelis leading the charge.

Ali Jabareen from the Arab-Israeli city Umm al-Fahm took his entire family to a villa in Jericho just two weeks ago. He told Al-Monitor that the town was highly recommended, so he checked the internet and found that three weekends in Jericho cost the same as a single weekend in the Galilee. “I asked my friends who had been there and they told it was quiet. They said there is good food and plenty to see, so we went. Now my kids keep asking me, ‘Daddy, when are we going back?’”

Abu Ra’ed and his wife own a visitor center in Jericho as well as a restaurant called “Temptation.” He told Gal Berger of the Israeli Broadcasting Corporation Kan that dozens of buses full of tourists used to come visit before the coronavirus, but it all stopped for over a year because of the pandemic. “Now, they’re slowly starting to come back. We hope that Israel will opens its gates to tourists from around the world.”

Abu Ra’ed may get his wish, and soon. Israel has released guidelines for tourists wishing to visit, with different regulations for group and individual travel. There are still many restrictions in place and international tourist numbers remain low. The main concern now is that the new wave of coronavirus cases in Europe will lead restrictions on entry to be reinstated. While Christmas is usually a high point in the tourism calendar, a new round of restrictions could produce another disappointing year.

With strict restrictions on leaving the country in place for over a year, Israelis are taking advantage of tourism and vacation sites in Israel. Last year saw a record number of Israelis booking rooms in resort towns like Eilat. But with steep prices there, Jericho has become a reasonably priced alternative. A Jericho hotel costs a quarter to a third the price of an Israeli hotel at the Dead Sea.

Still, when planning a vacation in Jericho, Israeli visitors must take into account its location in the West Bank's Area A. The Oslo Accords stipulate that the Palestinians have both security and civil control there and Israelis are required to ask for IDF approval to enter Jericho. It is reportedly easier for Arab-Israelis to enter Area A, which explains why Arab-Israelis make up the bulk of people who stay at these low-priced Jericho villas and hotels.

Yussuf al-Badir, who owns a restaurant in Jericho, is in regular contact with Israeli tour organizers. He tells Al-Monitor that after half a year of silence, his phone has started ringing again over the last few months. “Israeli tour organizers ask local tour guides to take their groups to important sites and to arrange lunch for them at local restaurants. These organizers make sure to receive entry permits from the IDF so their buses can arrive in the morning and leave in the evening.” When asked about security, he said, “The Palestinian Authority and its security forces ensure that everything remains quiet, and they provide security arrangements. No one in the city would dare to try and hurt tourists and ruin our chance to earn our livelihoods.” He added that he wishes tourists from the Gulf States would come too, now that Israeli has signed a normalization treaty with the United Arab Emirates and Bahrain.

Will more Israeli tourists come to visit the town? It all depends on both the coronavirus as well as calm holding in the area. Recent disturbances in the region such as in the Old City of Jerusalem could greatly affect tourism to Jericho.