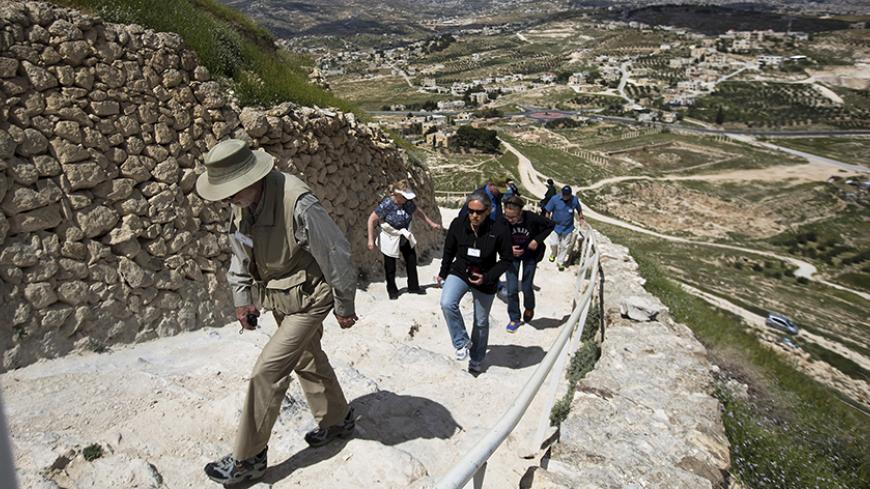 In a few months it will be 15 years since the Israel Defense Forces Central Command first issued the directive prohibiting Israeli citizens from entering Area A territories in the West Bank, placed under Palestinian Authority control by the Oslo Accord. But slowly, quietly, the IDF is allowing Israelis to visit in an orderly manner. According to tour companies and tour guides, thousands of Israelis have already gone on organized tours in recent years, with the authorization of the military and in coordination with the Palestinian authorities, mostly to Jericho and Bethlehem, but also to other tourist destinations.

“Due to popular demand — another trip to Jericho!” The online ad for Trips and Tales caught my eye before the Shavuot holiday. “In cooperation with security services, we’ll venture a bit over the border … to the Deir Hajla Monastery, the Quarantal Monastery and Herod’s castles.”

According to Meny Nahman, an employee of the tour company, “As of now we’ve had 150 buses, each of them with 50 people. Before [we started going to the West Bank], we visited biblical sites and we stopped at the border, but the story is incomplete without Jericho and Bethlehem. Jericho is amazing in every way — the landscape, history and the connection to the heritage of Israel.” He clarifies, “The tours are apolitical. We try not to present it as returning the land of the patriarchs or to prefer the other side. The tour guide staff is mixed and we do not present a political stance, but only show the current situation.”

This isn’t the only company that does this. There are several tour operators in Israel that fill hundreds of buses with Israeli tourists who want to visit Jericho and Bethlehem just like they visit Acre, Nazareth or Paris. Tours and Encounters, run by Itzik Tahori, started operating only four months ago, and has already brought six or seven tour groups to these destinations.

The IDF confirmed to Al-Monitor that these tours are indeed taking place, though its spokesperson did not give the exact number of Israelis who received entry authorizations to Palestinian cities in recent years. Its spokesperson related, ''Every year, hundreds of thousands of visitors enter Palestinian cities, including foreign tourists, Israelis, Israeli Arabs and Palestinians from various sectors. As part of the measures promoting the Palestinian economy and confidence-building, groups of Israeli tourists are allowed entry by the commander of the Central Command into the cities of Bethlehem, Jericho and Ramallah. It must be emphasized that the procedure applies only to Israeli tourists.''

One of those tourists is Keren Ashkenazi, 52, from Nes Ziona. “Why do I go there? I’m at a stage in life where I go on adventures — with calculated risks, of course — to visit places I haven’t been. Curiosity draws me.”

Motti Hai Efrati, who started leading groups to the area a year ago and heads two to four tour groups a month, says that the target audience is “all of Israel," adding, "Memories guide them — ‘Here is where I served in the army,’ ‘Here is where I visited before the intifada,’ ‘I remember the Tree of Life mosaic.’ They behave there very much like the Chinese or Swedish or American tourist. It’s a different country, where our group is one of many groups that come from many countries.”

All this is happening discreetly. The tour guides work almost secretly, afraid that increased interest in visits there will give the authorities on both sides second thoughts and to put an end to it all. Efrati, like other tour guides, says he's afraid — "I don’t want someone to ruin this delicate thing that’s being created now. It may be that the two sides are trying to calm the area, to slowly bring about normalization.”

Another tour guide, who refused to give his name for this reason, adds, “It has to be under the radar, because if this comes to the attention of too many higher-ups and there is too much publicity, the Palestinian Authority will shut it down because it’s normalization, and that’s a vulgar word in the Palestinian Authority.” According to him, “The tours take place discreetly, without making too much noise.”

When one of the participants put up photos on a tourism forum, other visitors rebuked him. “If word about the tours gets around, it may be that certain elements in the city will feel threatened and this would put the tour groups in danger, and we could forget about the IDF’s authorization in the future,” wrote one.

But for Efrati, it’s crucial that the tours continue. He says, “For Israelis it shows another face, for anyone who had a prejudice about some dark and remote place where plots are hatched against Israel. And the Israeli shekels flowing to Jericho help peace — it helps people’s livelihood, and happy people make peace. They put pressure on their leaders and dream that the politicians would decide to act on it.”

The tour guides say that the phenomenon started in 2011, and grew in the past year, continuing even around the time of Operation Protective Edge in Gaza. It seems that a stream of requests to visit apparently convinced the IDF, which preferred to give limited authorizations rather than to issue a sweeping prohibition and cause discontent and anger among the applicants. Even today, visiting isn’t simple and requires advance preparation of around three weeks, and visitors give their identity cards to the IDF and get a special entry permit.

For the tour guides it’s important to enter without an IDF escort. “I don’t want the army next to me, it hurts the Palestinian hosts,” says Efrati. “The IDF doesn’t come with us. We’re going to another city, to a foreign country. Just as you’d expect that a French policeman would protect you in Paris, so I expect that the Palestinian police would protect Israeli tourists. We’re going on a preset itinerary, and they know about it. Just after the recent election, we were at Tel Jericho, and a senior Palestinian official arrived to speak with the group. He only spoke about peace, and said he’s very happy to see Israelis in Jericho.” The IDF spokesperson related, ''Bus security as well as the security of the organization/group within the Palestinian cities is the responsibility of the Palestinian security services through accompaniment [on] the tour of the cities."

Efrati’s tour of Jericho brings participants to magical places like Herod’s winter palaces, the 10,000-year-old city of Tel Jericho and Mount Quarantal, where, according to Christian belief, Jesus spent 40 days and nights. Afterward, visitors reach the center of the city. They have free time to roam the market and eat at a local restaurant. In Bethlehem the emphasis is Christian, with obligatory visits to the Church of the Nativity, the Milk Grotto and the Shepherds’ Fields, but also includes meeting with young Palestinians and taking in some of the many excellent arts events that take place in the city.

Tahori says that the owners of the restaurant they visited were thrilled to see Israeli tourists, and gave each woman a bouquet of irises and each man a basket of dried fruits. Tourist Keren Ashkenazi recalls, “We went up to Quarantal. We walked around the center of town and we were treated very pleasantly. Overall it’s a very touristy area. We weren’t the only foreigners — there are tourists from all over the world there. For me, it was a unique and special visit.”

Another tour guide says, “As for the question I’m most frequently asked — is it safe — it is. I’m not one to take on extreme risks, and it’s a tour group. I’m glad to visit there. I brought about 1,500 Israelis there without one incident. People return happy and satisfied and content, and mostly also surprised by their nice treatment by the local population, from the interest. [The local hosts] are apparently also excited to see Israelis.”