Tourism to Bethlehem is suffering because of the Israeli occupation and the recent conflict in Gaza, Dalia Hatuqa reports. 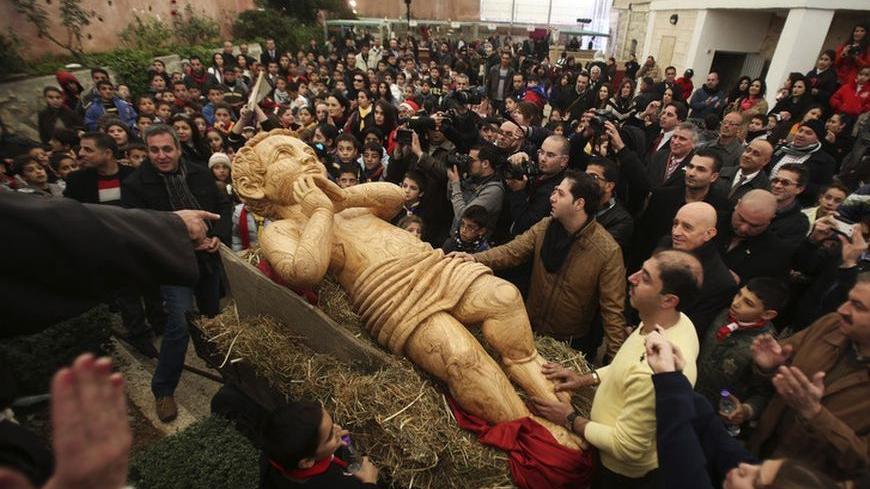 Palestinians surround a cart carrying a wooden statue of baby Jesus before a march in the West Bank town of Bethlehem, Dec. 20, 2012. - REUTERS/Mohamad Torokman

BETHLEHEM — With Christmas eve approaching, Palestinians are praying that tourists and pilgrims will make their way in large numbers to celebrate the birth of Jesus Christ in Bethlehem.

In stark contrast to the years of the second Intifada (uprising), Bethlehem has seen a rise in the number of visitors. But the city has yet to fully reach its potential, given it houses important Christian landmarks such as the Church of Nativity, believed to have been built over the manger where Jesus Christ was born.

Less than ten kilometers [about 6 miles] away from Jerusalem, the West Bank city of Bethlehem is home to 29,000 people, 28% of whom rely on tourism for their income. Turnout to the city has increased every Christmas this past decade in comparison with the Intifada of late 2000-2005. The number of overnight visitors reached approximately 1.5 million so far this year, according to the Palestinian Authority Ministry of Tourism and Antiquities, but many factors are still affecting how many people will celebrate the festivities here this year.

During this time last month, Israeli jets were pounding the Gaza Strip with airstrikes, leading many tourists to cancel trips to the Holy Land. The Bethlehem Chamber of Commerce and Industry says that 20-23% of incoming tourism have been affected by the most recent war in Gaza.

This year, Palestinians were looking to capitalize on the United Nations General Assembly vote which upgraded the status of the Palestinian Territories to “non-member observer state,” a category held by the Vatican.

While the UN pitch attracted more hotel and tour bookings, it was not enough to offset the slew of cancellations that followed the conflict in Gaza. In fact, the move was met with an Israeli withholding of tax monies — which it collects on the PA’s behalf — a move that Palestinians say is affecting their festivities.

The PA, considered the largest employer in the West Bank and Gaza Strip, has been delaying paying its workers because of an ongoing financial crisis brought about by a decrease in international aid and exacerbated by the taxes being withheld by Israel.

When asked about the current financial context surrounding the holiday season, George Rishmawi, a tourism expert said, “This year we don’t know how many homes Santa will visit because people can’t afford to buy gifts. All the towns that celebrate Christmas will do so in light of a bad economic situation.”

Another issue hampering efforts to capitalize on the historical and religious sites of the Holy Land is access. Palestinians say the inability of local tour guides to access places like Nazareth and Jerusalem is a major problem for tour operators. Further, Bethlehem is hemmed in by Israeli settlements and disconnected from Jerusalem by the separation wall — visible from the front door of the city’s lavish Intercontinental hotel.

According to Rishmawi, only 41 out of 300 tour Palestinian guides with West Bank IDs have Israeli-issued permits to enter and lead tour groups in Jerusalem and Israel. While it is illegal under the Oslo Accords for Israelis to enter Area ‘A’ of the West Bank, where Bethlehem lies,  the PA allows Israeli tour guides and buses full access to the city and its holy sites.

“While the Israeli guides are welcome here, this does have an economic impact on some of the local guides and operators. We want to see reciprocity. Many Palestinian guides are licensed but are currently unemployed because they don’t have permits,” says Rishmawi about what he calls a lopsided dynamic.

Because the West Bank is occupied by Israel and does not have sovereign borders or crossing points, Palestinian tour operators have to fly groups through Tel Aviv’s Ben Gurion Airport which they cannot access, dealing a hefty blow to Palestinian transportation companies.

Evidently missing from the Christmas scene are tourists who stay overnight and/or eat in Bethlehem, as well as families who just venture over on their own from neighboring Jerusalem. Most visitors are day trippers on holiday in Israel and their quick run in and out of the Manger Square and Church of the Nativity means the full economic benefits of their visit are not reaped by Bethlehem’s business owners.

Palestinians acknowledge that there is much to be done to improve tourism in the West Bank. As it stands now, this sector accounts for only 13% of the Palestinian GDP. This is quite low considering the many historical, cultural and religious sites that leave this area with much to offer.

As the main hub of tourism is Bethlehem, which has long been the destination for traditional pilgrims, tourism experts agree that they should work to attract a more diverse tourist base. Acknowledging this problem, the PA’s Minister of Tourism Rula Ma’aya says, “We are trying to work hand-in-hand with the private sector to promote Palestine and with foreign representative offices to open new markets for Palestinian tour operators.”

Dr. Samir Hazboun, chairperson of the Bethlehem chamber of Commerce and Industry, says that tourism is a bigger  part of a development problem plaguing the Palestinian Territories, an issue which requires changes to movement restrictions, access and borders.

However, he is optimistic, sighting changes on the ground that have seen the number of Bethlehem’s souvenir shops increase and the number of hotel rooms expand. “Each year I am seeing that Christmas is improving here, and the number of visitors is increasing especially those staying overnight.” While Palestinians have some major hurdles to overcome to sell the West Bank as a tourist destination, some are still hopeful that this objective may be within reach.

Dalia Hatuqa is a contributing writer for Al-Monitor's Palestine Pulse. A print and broadcast journalist specializing in the Middle East, she is based in the West Bank city of Ramallah and writes for several publications about politics, the economy, culture, art and urban design. She regularly contributes to Al Jazeera's English website, The National (UAE) and Brownbook and Masquerade magazines.