Easter, along with Chrismas, has been a high point for tourism in Bethlehem, the birthpace of Jesus, but alas, not this year. 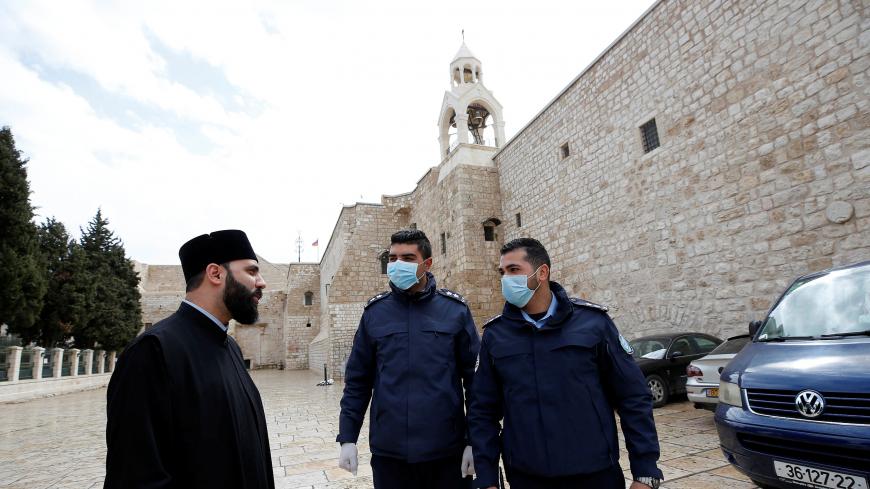 Palestinian police patrol outside the Church of the Nativity, which has been closed as a preventive measure against the novel coronavirus, Bethlehem, Israeli-occupied West Bank, March 6, 2020. - REUTERS/Mussa Qawasma

BETHLEHEM, West Bank — “The city would have been crowded with tourists this time of year,” said Elias al-Arja, president of the Palestinian Hotel Association. “Streets, shops, hotels, restaurants would all be packed with tourists, but this year, there is no one. It is a catastrophe.”

Every March and April, Bethlehem, the birthplace of Jesus, comes to life as Christians from around the world flock there for anticipation of Easter. This year will be different for the historic West Bank city, which has been under lockdown since March 6, after the first cases of COVID-19 emerged in Palestine.

“There is no holiday to be celebrated amid these conditions,” Arja said, noting that the current situation will not only affect the city financially, but will also deprive local residents of the usual joy surrounding Easter, one of the most festive occasions in the city.

For Christians, Bethlehem is second only to Jerusalem in importance, while it is the most important on the international tourism map. Both Palestinian and Israeli tour operators offer itineraries for the city, which depends heavily on tourism revenue.

Ramallah resident Khalil Dawood told Al-Monitor how his family’s annual spring ritual will be upended this year. Part of his family lives abroad, and it has become a tradition for them to all gather for a reunion at Easter in Bethlehem, where his son, brother and aunt live.

“This present situation is more difficult than the wars and occupation we live through,” Dawood said. “This is the only time when I have not been able to visit the holy places on holidays. Never can I remember the Church of the Nativity being closed on Easter.”

Sitting next to Dawood, his wife, Juliet, nodded sadly in agreement. She laments not being able to pray in the Church of the Nativity and will greatly miss her sisters, who travel from the United States to visit every Easter. In addition, if the lockdown continues, she will not be able to see her sister who only lives an hour away, in Bethlehem.

Elias Deais, head of the Holy Land Trust, an NGO that offers local tours, told Al-Monitor that his organization’s program for the year had been completed and ready to go. In the high season, Bethlehem hotels operate at full capacity, so tour operators often book rooms at hotels in the nearby towns of Beit Jala and Beit Sahour. Many would-be visitors had also booked hotels for May, raising local hopes for a fertile year in tourism, he said. The novel coronavirus has dashed those hopes.

Groups booked through May have since canceled, and Deais believes summer bookings will likely suffer the same fate. “We just hope we don't lose the third tourist season,” he said, referring to Christmas. The first season is from mid-February to May, encompassing Easter, and the second runs from September to November, when mild weather prevails.

The more-pessimist Arja said he does not envision an economic recovery until next year. “The tourism sector, the core of which is Bethlehem, had a remarkable recovery during the past two years, recording a significant increase in the number of tourists coming to Palestine,” he said. “This, in turn, encouraged dozens of investors to invest in building hotels and expand their existing ones.”

Arja further noted that tourists who come to Bethlehem also tend to visit other places in Palestine and Israel. The Ministry of Tourism has not issued precise figures on projected losses to the tourism sector, but Arja estimated that it could be as high as $720,000 a day for Bethlehem during the high season.

“There are 48 hotels and a total capacity of 4,800 rooms in the city,” he asserted. “As these rooms are fully booked in the high season, we accommodate an average of 9,000 tourists per day at a rate of $40 per person. Plus tourists spend around the same amount in shops and restaurants every day, which means that the loss is estimated at $720,000 for just one day.”

On March 17, Samir Hazboun, head of the Bethlehem Chamber of Commerce and Industry, was reported by Wafa, the Palestine News Agency, as saying that 92% of all businesses in Bethlehem, not just those in the tourism sector, had closed shop, in the process driving the unemployment rate above 50%.

This loss will severely impact the Palestinian economy as a whole of course, as the Bethlehem governorate contributes 16% to 18% of gross domestic product.

Bethlehem Mayor Antoine Suleiman told Al-Monitor that it is still too early to be talking exact figures. Amid such an unprecedented crisis, he said, it is difficult to calculate such results until the moment passes. That aside, Suleiman believes that with the crisis bringing major economies to their knees, the consequences for the feeble Palestinian economy will be especially trying and long lasting.