No Christmas cheer in Bethlehem this year amid coronavirus pandemic

The municipality of Bethlehem in the southern West Bank has begun preparations to celebrate the holidays amid exceptional measures due to the coronavirus pandemic. 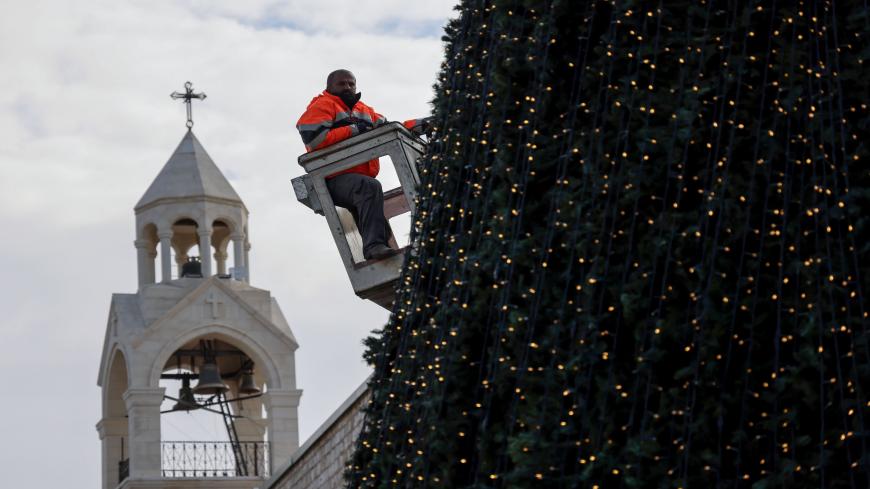 A worker sets up lights on a giant Christmas tree at the Church of the Nativity compound as mass was celebrated to ceremonially launch the beginning of the Christmas season, Bethlehem, West Bank, Nov. 28, 2020. - Emmanuel Dunand/AFP via Getty Images

In light of this decision, the Bethlehem municipality announced Nov. 24 that the opening of the annual Christmas market, scheduled to begin in the first week of December, has been postponed until Dec. 19 or Dec. 20.

The Christmas market is one of the main events of the Christmas season in Palestine, which usually begins in the first week of December and lasts until Jan. 10.

The residents of Bethlehem and other Christians in Palestine fear they will not be able to take part in these celebrations, especially after the local health directorate in Bethlehem recommended Nov. 21 the cancellation of Christmas celebrations in the governorate due to the coronavirus pandemic.

As of Nov. 30, 1,314 people tested positive in the West Bank, including 134 in the Bethlehem governorate, according to the Ministry of Health’s daily report on COVID-19 cases.

Qassam Maadi, 32, from the village of Taybeh to the west of Ramallah, participated in these events in past years even though he is not a resident of Bethlehem. Taybeh is the only Palestinian village inhabited by Christians only, in total 1,400 residents.

He told Al-Monitor that so far, celebrations were limited to religious rituals in the village. But in recent years, he said, all the festivities, especially attending mass at the church in Bethlehem and the Christmas tree lighting and other activities, have become an essential part of the joy of this holiday.

Although the people of the village, which is a two-hour drive from Bethlehem, are keen not to miss the celebrations, “It will be difficult for the families of the village to go to Bethlehem to celebrate this year,” Maadi said.

On Nov. 21, Bethlehem Mayor Antoine Suleiman posted a video on the municipality's Facebook page, in which he stressed that the celebrations will not be canceled this year. Yet still, the people of Taybeh, as well as other Palestinian Christians, fear that they will be deprived of visiting their holy city like they were during Easter in April, which coincided with the outbreak of the pandemic in Palestine.

Suleiman said in the video that precautions will be taken according to health protocols if the COVID-19 cases continue to increase. He explained that the municipality’s partners that help it organize these celebrations will meet Dec. 14 to assess the general situation and make the necessary arrangements to ensure the holidays are properly celebrated.

According to the municipality, a number of events will be virtual and broadcast online to the public.

The Palestinian government announced during its last session Nov. 23 a set of measures to be implemented during Christmas celebrations and the lighting of the Christmas tree, including wearing masks, avoiding large crowds and abiding by social distancing during religious rituals.

The Christmas celebrations in Palestine usually begin with the lighting of the Christmas tree on Dec. 1 and end on Jan. 10. For 40 days, Bethlehem and its surroundings are decorated with Christmas lights and attract people from inside and outside of Palestine, especially on Dec. 23-24, as processions begin and the midnight mass takes place in the Church of the Nativity.

Hanna Hanania, deputy mayor of Bethlehem, told Al-Monitor that all the events will be held according to the measures announced by the Ministry of Health, taking into account social distancing and making sure the number of participants does not exceed 50 people.

On Nov. 28, the parade of the Custodian of the Holy Land was held in the presence of officials only. This event will be followed by the lighting of the Christmas tree, which will also be only attended by officials and clerics, provided that the celebration is broadcast online to the public.

Hanania noted that the municipality is committed to any decision that the government takes in the event of an increase in COVID-19 cases and thus a possible complete lockdown.

Over 17,000 Palestinians and foreign tourists usually attend these celebrations, but this year they will be limited to Palestinians, amid the travel ban to Palestine. About 3,000 previously made reservations to attend the Christmas tree lighting by tourists traveling through Israel have been canceled, Elias al-Arja, president of the Palestinian Hotel Association, told Al-Monitor.

“Now that we know for sure that foreign tourists will not enter the city this season, we hope that COVID-19 cases will not increase so we can avoid a complete lockdown and Palestinians can move between governorates or come from Israel to [Bethlehem],” Arja said.

With the easing of the measures restricting movement in Palestine and the world during the last three months, the tourism sector in the city had hoped that the economic conditions, especially during the Christmas season, would compensate for the great loss that this sector suffered since the start of the pandemic. The Central Bureau of Statistics and the Palestinian Ministry of Tourism estimated the losses in tourism revenues to be worth $1.5 billion.

Arja noted, “The city of Bethlehem is the heart of the tourism sector. We now rely on local tourism, but this type of tourism is still weak and it cannot compensate for 5% of the losses the tourism sector endured.”

Arja recalls the previous holiday season, saying that the hotel occupancy rate in the governorate amounted to 100% in 73 hotels with 5,000 rooms, and the number of tourists who stayed in the city exceeded 10,000 throughout the holiday season that extended for a month and a half.