The Grinch who stole Palestinian Christmas

In light of the ongoing intifada, the municipality and Council of Churches of Ramallah decided to show solidarity by limiting manifestations of joy during the Christmas holiday season. 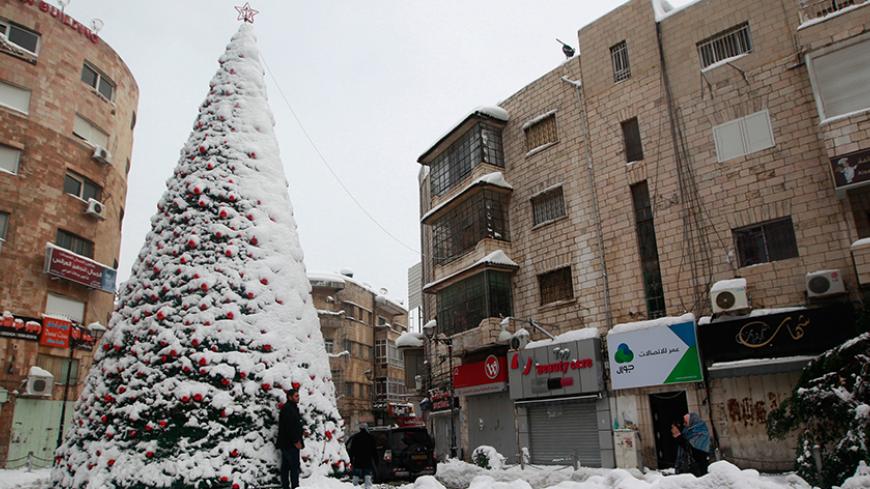 A Palestinian man poses for a picture in front of a Christmas tree in the main square in the West Bank city of Ramallah, Dec. 14, 2013. - REUTERS/Mohamad Torokman

RAMALLAH, West Bank — Activist Hekmat Bessiso recently wrote on her Facebook page, “If the birthplace of Jesus Christ does not celebrate Christmas, who in the world will? I hope Palestine remains full of lights every December. Our struggle is enduring, and this is why we should preserve our joy.” Bessiso's comments were in protest of a Nov. 23 declaration by the Council of Churches of Ramallah city and municipality to cancel the annual Christmas tree lighting and limit Christmas celebrations to religious rituals because of the current unrest. It said the decision had been made out of respect for victims and the wounded. As of Dec. 8, the number of Palestinians killed during the two-month-old intifada stood at 117.

Bessiso, a Muslim from Gaza, now lives in Ramallah. She told Al-Monitor that the annual tree-lighting ceremony in the city, held on Dec. 19, is an event she always attends with her son, Yazan, 10. She calls for preserving all manifestations of Christmas joy and celebration because, she says, it gives Christians a sense of belonging to this land, which would not be complete without them.

According to the most recent (2007) census by the Palestinian Central Bureau of Statistics, Ramallah and neighboring villages are home to 10,800 Christians out of a total 275,000 residents. Christians belong to six churches — Latin, Coptic, Catholic, Evangelical, Lutheran and Greek Orthodox — which are represented by the local Council of Churches.

“The occasion could have been used to encourage the intifada that started on Oct. 1 and express our suffering,” said Bessiso. “We could have lit the Christmas tree with the names of all the victims.” She further stated, “This intifada is not momentary and might continue. It is unacceptable to ban all manifestations of joy on holidays, which are the only events that are collectively celebrated.”

Bessiso also spoke of the rituals that reflect Muslim-Christian coexistence in Ramallah as well as in Palestine in general, noting that Muslims participate in Christian holidays and vice versa. “We are the country of Christ, and we are more entitled to celebrate his birth in light of the current Palestinian situation. Religious ceremonies have a Palestinian national character, and we should not be deprived of this aspect of the holidays. On the other hand, by celebrating Christmas, we would be sending to the world a strong national message that we are under an Israeli occupation that is murdering our people, but we are still enjoying life.” Bessiso said that unlike in previous years, this year she will stay at home and watch celebrations around the world on television.

Bessiso has not limited her objection to Facebook postings. On Nov. 30, according to her, she along with some 120 of her friends and others submitted a petition to the Council of Churches to encourage it to reverse its decision. The petition failed to elicit the desired result, as local leaders reaffirmed their decision in a Dec. 2 statement issued by the Ramallah municipality.

In the statement, the council and municipality stressed that Christmas holiday festivities would be limited to religious, popular and national events, considering them an embodiment of the unity of the Palestinian people. The statement said a decision had been made to cancel other celebrations, noting, "Out of respect for the sacrifices of the victims. The Christmas tree will not be lit. The municipality will not decorate the city, which witnesses on a daily basis solidarity events, whether funeral processions for victims or protests demanding the delivery of victims’ bodies [held by Israel]."

The municipality's earlier decision had been followed by a press release on Nov. 23 by Ziad Bandak, adviser to the head of Christian National and International Relations, affiliated with the Palestinian Authority, confirming that Christmas festivities will be limited this year to religious rituals in all of Palestine, including Bethlehem.

Some Christian religious figures voiced their concern about what they described as killing the joy of Christmas. The Greek Orthodox archbishop, Atallah Hanna, told Al-Monitor that his reservations about the decision are based on his rejection of reducing Christmas to particular rituals and practices, because the holiday is an occasion for Palestinians to express their attachment to life and to the land of Christ despite any actions taken by Israel, such as setting up checkpoints, including in Bethlehem, and conducting arrests.

Bishop Atallah said, “We must preserve all manifestations of joy and not be influenced by the actions of Israel, which kills Palestinian youths and assaults holy places. We must announce to the whole world that we are people passionate about life, and we will not give up the right to live in freedom and dignity in our homeland.”

Atallah said that he had sent an open letter to decision-makers on Nov. 26 titled “Do Not Kill the Joy of Christmas in My Country" in which he wrote, “Do not deprive our children of the joy of Christmas. Israel has caused us enough suffering. Christmas is not just about religious rituals. It is about spreading joy and hope in the hearts of our people.”

In a meeting with Al-Monitor, Bandak explained that the decision had been based on objective reasoning. “Religious holidays, whether Christian or Muslim, cannot be canceled, but we, as church representatives and municipalities in Palestine, are trying, under the current conditions in our country, to balance between [harsh] conditions and holiday celebrations,” he said. “In light of the situation on the ground, we decided to limit holiday festivities, but not cancel them all. We will celebrate Christmas by sending a message of life, peace and love from the birthplace of Jesus Christ to make the voice of our people, facing daily actions by Israel, heard.”

Bandak remarked how the lighting of the Christmas tree in Bethlehem's Manger Square is a 1,000-year-old tradition marking the beginning of the holiday season. “The decorations will be limited to the colors of the Palestinian flag, while fireworks, associated with this event in previous years, will not be used, but church bells will ring instead,” he said. “Only the main streets will be decorated.”

Scout groups typically accompany the entrance of the Latin patriarch of Jerusalem, currently Fouad Twal, to the Church of the Nativity for the midnight mass. Bandak said that this year, the scouts will sing Christmas carols and national songs only, and there will be no celebrations in which musical and artistic bands perform.

“It would be wrong to celebrate while young people and children are dying in the area, especially in the city of Bethlehem, and are being killed by Israel. The families of these victims will be participating in the Christmas tree-lighting ceremony,” Bandak remarked. “By doing so, we will be sending a message to the world that we are not feeling the joy of Christmas as a result of the continuous Israeli measures against us.”

Concerning the protest against the decision not to light a tree in Ramallah, he said, “These measures revert to the municipality of the city of Ramallah and the Council of Churches, and they know best the city’s conditions and appropriate decisions.” Regardless of the official reasons provided, the canceled Christmas celebrations will leave a big void, depriving Palestinians, Christians and Muslims alike of the joy they look forward to every December and need more than ever at this moment.