Following a busy tourist season this year, Bethlehem is preparing for the Christmas holiday that has bringing more foreign visitors this year in addition to Christian and Muslim Palestinians to the city. 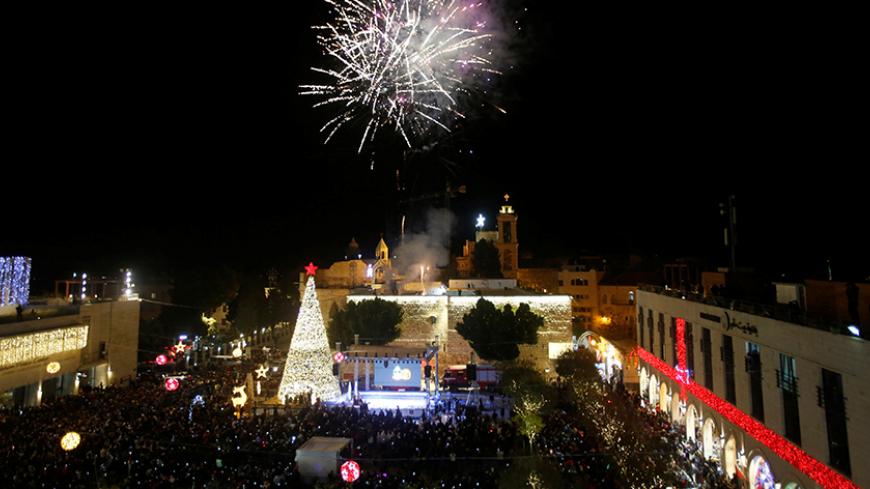 Fireworks explode during a Christmas tree lighting ceremony outside the Church of the Nativity in the West Bank town of Bethlehem, Dec. 3, 2016. - REUTERS/Mussa Qawasma

BETHLEHEM, West Bank — Since Dec. 3, the day the Christmas tree was lit, Palestinians and tourists from all over the world have been flocking to Bethlehem, where Christmas celebrations are not limited to Christians but involve all Palestinians.

Locals and foreigners have been gathering day and night in Manger Square since the tree was lit. While street vendors sell lupini beans, corn and Christmas cookies, children run around the tree and adults take pictures and selfies in front of it.

Shatha Hamad traveled from Ramallah to Bethlehem with her three children to see the tree. She told Al-Monitor that the days before Christmas are less crowded than Christmas Day, and that the children can play freely and enjoy the Christmas spirit.

She said, “We wait for this occasion every year; there is no happier time. [Bethlehem] turns into a city of light where streets, buildings and shops are decorated and a large tree is lit.”

Although the city of Ramallah, where Hamad lives, lit its tree Dec. 4, the atmosphere is different in Bethlehem. Hamad added, “I make sure to respect the religious meaning of the occasion. We aren't Christians, but we believe that Jesus is our prophet, and this piece of land where he was born is our home. This is what I'm trying to teach my children.”

Vera Baboon, the head of the Bethlehem municipality, said in the speech she delivered during the tree lighting event in Manger Square that these celebrations send a message to the world that Palestine and its people are still dreaming of living, staying and rejoicing on their land.

The municipality and the Ministry of Tourism decorated the tree in the color gold this year; the last two years, the tree was decorated with the colors of the Palestinian flag.

This year, decorations are not limited to Manger Square. The road between Jerusalem and the Church of the Nativity, which is where the Apostolic Patriarchate representative convoy will be received on Christmas Eve, has been decorated with golden lights. In 2015, celebrations were limited to the tree lighting out of respect for the victims of the Jerusalem intifada.

Fady Ghattas, the media spokesman for the Bethlehem municipality, told Al-Monitor that the Christmas preparations started in October, and that the employees are working hard in the runup to Christmas.

Ghattas said that it was the first time the tree lighting ceremony was broadcast globally and the bells of the Church of the Nativity rang out in conjunction with other churches around the world.

Asked about the decorations and logistics, Ghattas said that this year the tree and the streets have been decorated in the color gold to symbolize the light of Christ that lit up the world from Bethlehem. The Christmas tree — 25 meters (82 feet) high and seven meters (23 feet) wide — is the largest in the history of Bethlehem.

In addition to the tree lighting event, representatives of more than 20 countries are taking part in the annual Christmas market in Manger Square, which according to Ghattas is a tradition that started in 2000. Representatives of countries that participate in this market exhibit their own traditional Christmas items; products for sale this year include the Greek Finikia cookies and Egyptian crafts and embroideries.

This year's Christmas motto is “mercy,” which, according to Ghattas, was chosen due to the situation in Palestine, the wars plaguing the world and the resulting difficult conditions for children. In addition, it aims to complement the Extraordinary Jubilee of Mercy (Dec. 8, 2015-Nov. 20, 2016) announced by Pope Francis.

The organization of the Christmas events has been a challenge for the municipality, as Bethlehem also saw many more tourists this year than previous years. Ghattas said the city is small and he expects possibly as many as 1 million foreign visitors — as per the occupancy rates of hotels and tourist office reservations from early December until the end of January — and locals are expected to crowd the narrow streets over the Christmas holiday.

Ghattas said that the municipality will rely on the security forces, and it will allocate parking spots for cars and reserve some streets just for pedestrians. “We expect the number of tourists to increase this year, especially on Dec. 24 for the reception of the Apostolic representative during his march from Jerusalem to Manger Square. The municipality organized the itinerary of this march in collaboration with all the involved authorities,” he said.

He added, “Groups and Scouts will provide the morning entertainment, and in the evening the Apostolic representative will be welcomed at the Church of the Nativity to attend the midnight Mass.”

The Christmas celebrations are a national holiday for Palestinians. Not only Christians celebrate, but Muslims await this holiday every year to steal a little bit of the joy that Christ spread in their country amid all the suffering that they are going through under the Israeli occupation.