Inside Mar Saba Monastery in the West Bank

Mar Saba Monastery near Bethlehem attracts thousands of tourists each year, all the while facing constant attacks by Israeli settlers. 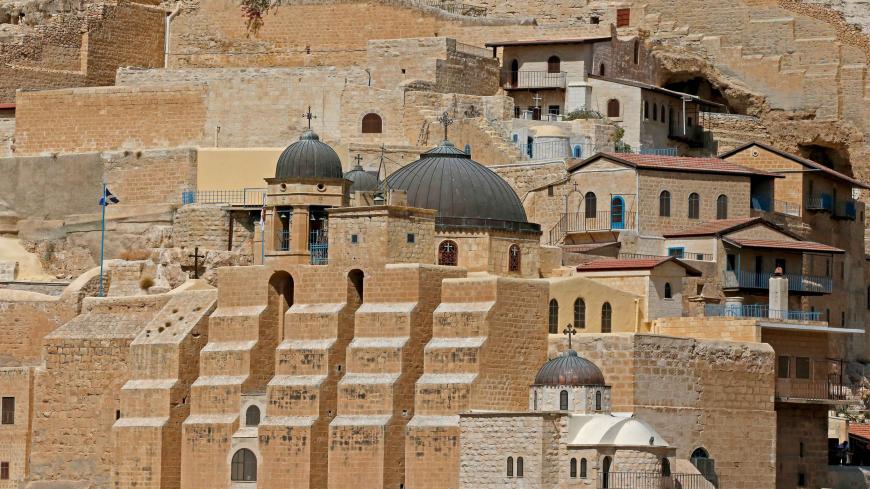 At the foot of a mountain peak in the Kidron Valley desert, the Mar Saba Monastery sits 1,500 meters (roughly a mile) away from the town of al-Ubeidiya, east of Bethlehem. The monastery dates back to the fifth century. Saint Saba, among other monks, founded it in 484 based on a unique engineering plan to become one of the oldest inhabited monasteries in the world.

The monastery is one of the most prominent Palestinian archaeological monuments. It is surrounded by magnificent natural sceneries showing the twists and turns of the valley. An 18-meter (59 feet) high tower called the Justinian Tower was erected next to the monastery in the sixth century and was used for observation.

Mayor of al-Ubeidiya Naji Radaida told Al-Monitor, “The monastery is an architectural masterpiece and is home to the relics of Saint Saba, whose slightly decomposed body lies in a glass box. There is also a church at the monastery, a water spring and a crypt leading to the monastery’s underground cemetery, where the remains of hundreds of monks who were killed by the Persians in 614 can be found. The monastery also houses the rocky hermitage of Saint John of Damascus, who lived there in the eighth century. The monastery consists of more than 100 rooms and is decorated with a number of paintings about Judgment Day and a painting of the burial ceremony of Saint John of Damascus.”

“The monastery still maintains its old traditions of preventing women from entering. Based on Christian beliefs, the monastery would collapse and be completely destroyed by an earthquake should a woman enter it. There are still some strange myths imposed by the monastery. Eating apples is forbidden since Saba once felt like eating an unripe apple; but deeming this as gluttony, he thought that the pleasure of eating the apple would affect his and the monks’ [journey] at the monastery,” Radaida said.

He noted, “The monastery is supervised by the Greek Orthodox community in Palestine, and 15 Greek monks live inside it. The monks refuse to be provided with electricity or modern water and communication networks, and rely on primitive means. They rely on the spring beneath the monastery for drinking water. The monks want to fully devote themselves to the worship of God away from all luxury. They want to follow in the footsteps of their ancestors.”

“The monastery is open to visitors and tourists from all over the world throughout the week, except on Wednesdays and Fridays. An estimated 350,000 domestic tourists visit the monastery annually, while the number of international tourists is estimated at 300,000 annually, most notably from Greece and Russia,” he added.

Jihad Yassin, director general of the Archaeological Excavations Department at the Palestinian Ministry of Tourism and Antiquities, told Al-Monitor, “The Monastery of Mar Saba was included in the UNESCO tentative list as it is the oldest monastery in Palestine.”

He said, “It was nominated by the ministry along with 20 other archaeological sites to be included in the list in 2015. The monastery was last renovated by the Russian Church in 1840.”

Yassin added, “The monastery is located in a touristic location that contains hundreds of caves where monks lived in the Roman Empire, which prohibited the Christian religion at the time. Those caves served as a safe haven for Christian monks to hide from the Roman soldiers."

He noted, “Women are not allowed to pray at the monastery. They can't enter the monastery and can only admire its wonderful design from the outside. However, there is a five-story building called ‘The Girls’ Palace’ from which women can look at the monastery. It sits on the western side of the monastery, 100 meters [328 feet] away from it. The building belongs to the Monastery of Mar Saba but is located outside its walls and women are allowed to enter.”

Mar Saba is located in Area C of the West Bank, which is under Israeli control. This area accounts for 61% of the West Bank, in which Israel has maintained almost full control following the signing of the interim agreement known as the Oslo II Accord between Israel and the PLO. In 1995, Israel divided the West Bank into three regions: Area A, Area B and Area C.

He said, “The area of the monastery — which is considered one of the oldest inhabited monasteries in the world — was stormed by hundreds of radical [Israeli] settlers in 2018 as a group of Christians gathered to celebrate Saint Saba’s Day.”

He concluded, “Never do the settlers miss a chance to attack whatever is Palestinian, including Islamic and Christian places of worship.”