The 1,500-year-old Mar Saba Monastery in Palestine has been nominated for inclusion among UNESCO's World Heritage Sites. 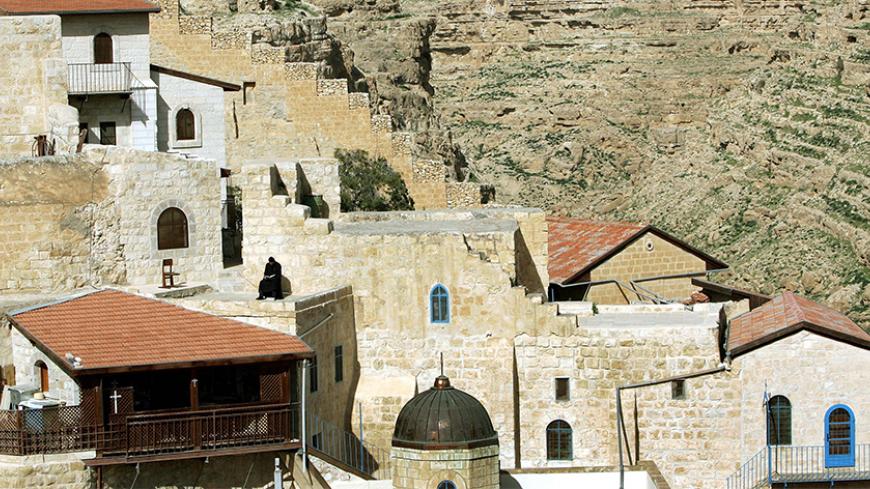 A Greek Orthodox monk reads in the Mar Saba Monastery in the Judean desert near the West Bank town of Bethlehem, Dec. 18, 2005. - REUTERS/Goran Tomasevic

RAMALLAH, West Bank — At the foot of a mountain in Bethlehem's Kidron Valley lies the Holy Lavra of Saint Sabbas the Sanctified, also known as Mar Saba Monastery, the most famous monastery in Palestine. Built 1,500 years ago by Mar Saba and 5,000 other monks, it has recently been nominated for inclusion in UNESCO's World Heritage Sites.

Mar Saba Monastery is one of 13 Palestinian sites included on UNESCO's tentative lists. Three Palestinian sites have already been classified among UNESCO's World Heritage Sites, following the admission of Palestine to UNESCO (United Nations Educational, Scientific and Cultural Organization) in 2011. These three sites are Battir's terraced landscape, which joined the list in 2014, and the Church of the Nativity and the pilgrimage route in Bethlehem, included in 2012. Mar Saba Monastery awaits registration, along with several other sites like the ancient cities of Hebron, Nablus, Jericho, Mount Gerizim in Nablus, the Qumran caves and Tell Umm Amer.

The official in charge of the World Heritage list at the Ministry of Tourism and Archeology, Ahmad al-Rajoub, told Al-Monitor, "Mar Saba Monastery has a cultural, religious and humanitarian value that qualifies it for inclusion on the World Heritage Site list, as it is one of the oldest monasteries in Palestine and is linked to Saint Sabbas, who established the monastic order in Palestine, which still maintains many of its ancient traditions after 1,500 years. This is in addition to its specific architectural style, which lies in harmony with its surrounding Kidron Valley."

Rajoub added, "The Palestinian National Commission [for Education, Culture and Science — PNCECS] included the monastery on UNESCO's tentative list. This a necessary step that precedes its registration on the World Heritage Site list." He explained, however, that the decision to submit the monastery for consideration has not yet been made.

Rajoub noted that the PNCECS chooses the sites to be submitted for registration on the World Heritage Site list according to certain criteria, to protect them from Israel and prevent them from being Judaized like the old city of Hebron. UNESCO only receives two applications a year at most, but the inclusion of Mar Saba Monastery on the tentative list is a first step toward including it later on the World Heritage Site list.

He added that preparations for submitting the application would require two years, after which it shall be submitted to the UNESCO World Heritage Center to be registered within a year and a half.

On the criteria for inclusion, Rajoub said, "The political and cultural circumstances of the location are taken into consideration. Therefore, work is now in progress to register the old city of Hebron on the list. Preparations are also underway for submitting the application of the Cremisan Monastery in Beit Jala."

Murad al-Sudani, head of the PNCECS, told Al-Monitor that the Palestinian delegation to UNESCO is cooperating with the Ministry of Tourism, the PNCECS and other institutions, looking for Palestinian heritage sites that Israel is trying to tarnish or distort. The delegation wants these sites to be included on the list of World Heritage Sites to be preserved and protected.

Sudani added, "Mar Saba Monastery was nominated for inclusion on the World Heritage list. We will do everything necessary to register it on the heritage list after preparing the file because it has a Christian national and cultural value for us and represents the national identity that unites both Muslims and Christians."

The monastery has an important religious and cultural value, and at first glance appears to be directly carved into the stone of the surrounding hillside. Today, the monastic order still applies specific religious and monastic laws dating back 1,500 years that guide an extremely ascetic life. Women are forbidden from entering. It is forbidden to eat apples on the site, and only olive and lemon trees are planted there.

The monastery, which was plundered by the Persians in 614 CE, is both a tourist and a religious destination. It houses the relics of Mar Saba and features an ancient church built into a marvelous cave in the rock, dedicated to Saint Nicholas and called in Arabic the "Church Built by God." The monastery's graveyard contains the relics of many monks and clerics who were killed by the Persians in 614 and barbarians in 796.

Osama al-Issa, a journalist who writes about Palestinian antiquities and natural sites, told Al-Monitor, "Mar Saba Monastery is the only one remaining among 80 monasteries and hermitages from the Byzantine era in the Dead Sea that were totally ruined, such as Saint Chariton's Monastery to the southeast of Bethlehem."

Issa added, "Mar Saba Monastery stood its ground despite tough circumstances throughout history. Monks were slaughtered when the Abbasids took over the rule from the Umayyads. When the Crusaders arrived to Palestine, they carried off Saint Sabbas' body to Saint Peter's Church in Venice, and it was restituted in 1965 following the agreement between Pope Paul VI and the Ecumenical Patriarch."

He added that the monastery contains the oldest known biblical translations into Arabic, dating back to 885 CE. Many famous Palestinian monks lived there, including Theodore Abu Qurrah, who was one of the first to translate theological texts, which were limited to Greek and Syriac, into Arabic. Estfan al-Ramli, whose Arabic translations of the Bible are considered among the oldest, also lived there. John of Damascus was among the most famous monks who lived in the monastery after serving as the minister of tax collection in the Umayyad Caliphate.

Saleh Tawafsha, the director-general for the protection of antiquities at the Ministry of Tourism and Antiquities, told Al-Monitor, "The monastery is located in Area C and is completely under Israeli control. This hampers many service programs."

He added, "The main challenges that the ministry is facing in offering its services to the monastery are due to Israel's obstruction of the ministry staff's work and its impediment of any improvement of the place's infrastructure. After all, Palestinians do not have privileges in these regions."