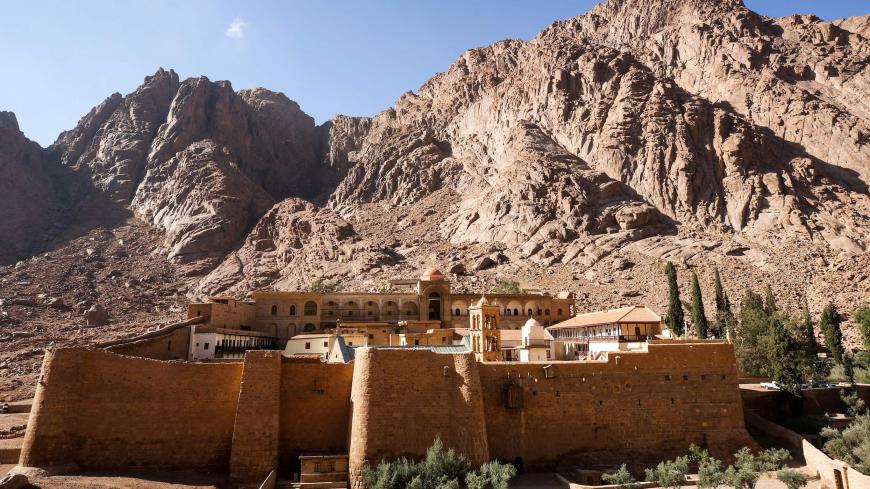 This picture taken Oct. 19, 2018, shows a view of the exterior of the sixth-century Greek Orthodox Christian monastery of Saint Catherine, near the Egyptian town of the same name in the south of the Sinai Peninsula. - SALLY KANDIL/AFP via Getty Images

Turkish President Recep Tayyip Erdogan ordered that Istanbul’s historic Hagia Sophia be converted back into a mosque July 11. On July 21, the Egyptian government announced that it was allocating 40 million Egyptian pounds ($2.5 million) to restore Saint Catherine’s Monastery in South Sinai governorate, one of the oldest monasteries in the world and a Christian landmark.

Egyptian Prime Minister Mostafa Madbouly visited Saint Catherine’s on July 21 and met with the monks there who awarded the Order of Saint Catherine. During his visit, Madbouly announced that restoration and development works for Saint Catherine's Monastery and the nearby city in South Sinai would begin immediately.

Saint Catherine’s Monastery is one of the oldest monasteries in the world, dating to the fourth century. The monastery is nestled at the base of Mount Catherine, the highest peak in Egypt. The monastery attracts thousands of tourists and pilgrims each year and is home to several churches and archaeological treasures.

Churches and European countries widely and vocally criticized Turkey’s decision to convert the Hagia Sophia Museum into a mosque and the Egyptian press contrasted it with the Egyptian government’s decision to turn Saint Catherine’s into a tourist destination.

The Hagia Sophia Museum was originally built as a Christian cathedral in the sixth century, but following the Ottoman takeover of Constantinople in 1453, it was converted into a mosque. Aftern the Ottoman Empire collapsed at the end of World War I, Mustafa Kemal Ataturk, the founder and first president of the Republic of Turkey, decided in 1935 to turn the monument into a museum.

Ihab Sobhi is the presenter on MeSat, the official channel of Saint Mark's Coptic Orthodox Church Cathedral. He compared the recent Egyptian and Turkish decisions on July 23 during his show, the “Good Evening Program.”

“President Recep Erdogan has destroyed tourism for false objectives and popularity among the ignorant when he converted into a mosque the Hagia Sophia Museum, the most important tourist attraction of the Western Christian Church. This should be seen in contrast with Madbouly’s visit to and promise to set up a global touristic city in the vicinity of Saint Catherine’s Monastery, which he also pledged to restore,” Sobhi said.

The Egyptian press erupted with condemnation of the Turkish president’s decision. Pro-government TV presenter Ahmad Moussa accused Erdogan of distorting the image and teachings of Islam.

Egypt’s Dar al-Ifta also denounced Erdogan’s decision. Ibrahim Nagm, adviser to the grand mufti, said in a July 11 press statement, “Erdogan’s decision is a dangerous political game and an attempt to present himself as a hero protecting and reviving the glory of Islamic sanctities.”

Saint Catherine is a global destination for pilgrims. The town is home to several religious monuments and historical landmarks in the Holy Valley, which contains Mount Sinai, the Chapel of the Burning Bush, the Mount of Transfiguration and Jebel Safsafa as well as Saint Catherine’s Monastery.

Madbouly met with the ministers of housing and civil aviation on July 28 to discuss proposals for the development of Saint Catherine.

The Egyptian Ministry of Antiquities revealed details of the project to develop Saint Catherine's Monastery on Aug. 1.

“The western part of the Saint Catherine's Monastery Library, the world’s second most important library after the Vatican Library with some 4,500 significant manuscripts, is currently being restored. This is in addition to restoration work on churches inside the monastery. Saint Catherine’s airport is also being developed to operate daily flights to and from Cairo and weekly flights between Athens and Saint Catherine,” the ministry said.

South Sinai governorate reopened hiking trails to Mount Sinai on July 25 after four months of closure per coronavirus restrictions and the return of tours setting out from the city of Saint Catherine.

“The Egyptian government is interested in boosting religious tourism because it is the most popular in the world. This is why Egypt is working on restoring historical monasteries,” Maged al-Raheb, chairman of the Egyptian Heritage Preservation Organization, told Al-Monitor.

“Egypt is also working to revive the Holy Family trail, in addition to the restoration work on Saint Catherine’s Monastery, which is seen as one of the most important monasteries in the world and attracts tourists from different denominations in the Christian world,” he added.

Raheb said confidently, “Egypt will certainly benefit from the end of the religious tourism in Turkey as a result of the scathing comments against [Ankara] for not respecting Christian monuments and changing the identity of a monument registered on UNESCO's World Heritage List.”

He concluded, “Religious tourism will shift from Turkey to Egypt, which has shown the world that it respects heritage and monuments, especially those of Christians, such as Saint Catherine’s, the Coptic monuments and churches on the Holy Family trail.”

Abdel Rahim Rihan is the director of the Ministry of Tourism and Antiquities’s Archaeological Research, Studies and Scientific Publishing Department in the Archaeological Areas of South Sinai. He told Al-Monitor, “The development project of the city and monastery of Saint Catherine stems from Egypt’s awareness of the significance of that area. Egypt is characterized by religious tourism and is a major destination for Christian pilgrims from all over the world.”

Rihan praised Egypt's “cultural and humanistic stance when it decided to launch comprehensive development works in the Saint Catherine area as a UNESCO World Heritage site and a symbol of tolerance and convergence of religions. One ought to compare this to Turkey’s uncivilized position following Erdogan’s decision to change the nature of a world heritage site, defying all international norms and covenants.”

“Egypt’s interest in Christian monuments positively affects religious tourism, while tourism in Turkey will be dealt a severe blow after the decision to turn Hagia Sophia into a mosque, especially if UNESCO threatens to remove it from its World Heritage List. The museum used to serve as a destination for many tourists of all religions and nationalities,” he concluded.