Egypt is planning to turn the city of Fustat, the oldest Islamic capital in Egypt and Africa, into an open museum that offers tourists a distinctive experience. 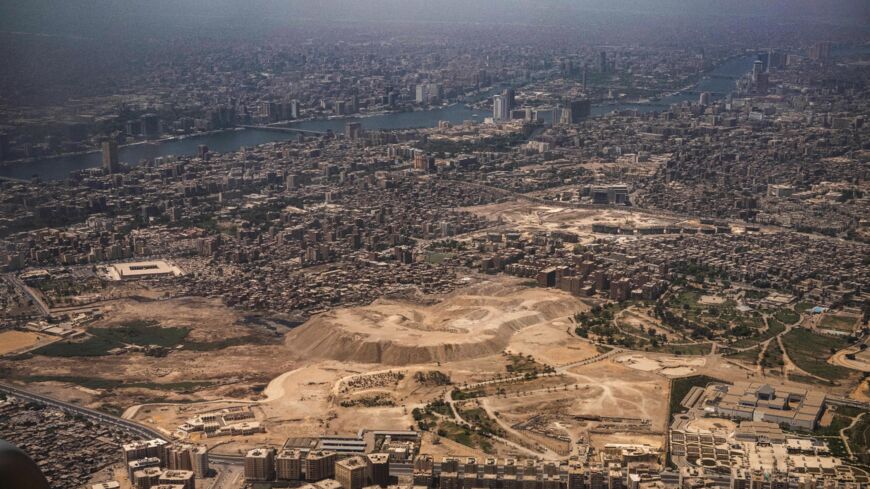 This picture taken on May 14, 2021, shows an aerial view of Egypt's capital Cairo's Nile island of Manial al-Roda (top) and the historic old Cairo district (bottom), showing the Mosque of Amr ibn al-Aas (the first mosque established in Egypt in AD 641-642), and the Religious Complex built atop the Babylon-in-Egypt fortress, which includes the 10th-century Greek Orthodox Church of St. George, the Coptic Orthodox Church of St. Mary (also known as "The Hanging Church"), and the 19th-century Ben Ezra Jewish Synagogue. - AMIR MAKAR/AFP via Getty Images

CAIRO — The Egyptian government announced on Aug. 23 that Egypt seeks to breathe new life into the ancient city of Fustat — the oldest Islamic capital in Africa — by turning it into an open-air museum for visitors from across the world.

The announcement came during a meeting between Prime Minister Mustafa Madbouly and officials in charge of the Fustat Gardens development project.

According to a statement published on the Egyptian premiership's Facebook page, the Fustat Gardens development project aims to design a public park overlooking archaeological and historical sites and monuments, converting the site into a regional and global tourist destination.

The project, according to the statement, also aims to offer recreational activities and traditional industries typical of the region by reviving its heritage throughout various Pharaonic, Coptic, Islamic and modern eras.

Osama Talaat, head of the Islamic, Coptic and Judaic Antiquities Sector at the Supreme Council of Antiquities, said in an Aug. 23 interview on the DMC channel the park will be built on 500 acres in the heart of historic Cairo, which is home to the National Museum of Egyptian Civilization, Ain el-Sira Lake, the Religious Complex and Amr Ibn al-Aas Mosque.

Talaat said visitors will be able to tour the alleys of the original old city of Fustat, which is currently being restored.

On April 3, 22 royal mummies were transferred in a parade from the Egyptian Museum in Tahrir Square to the National Museum of Egyptian Civilization in Fustat.

The city of Fustat dates back to the year 641 and was built by Arab commander Amr ibn al-Aas in the wake of the Islamic conquest of Egypt.

Fustat means “the tent,” and the city served as the capital of Egypt for 113 years — followed by al-Askar, al-Qata’i and then Cairo, which have as common denominator their expansion and urban sprawl.

These cities are now part of a single entity known as Cairo.

Islamic researcher Moaz Lafi told Al-Monitor any interest in areas rich in antiquities would attract tourists — especially in Fustat, which was not on the tourism map before the development of the National Museum of Egyptian Civilization and Ain el-Sira Lake.

Lafi said he noticed during his visit to the National Museum of Egyptian Civilization and the surrounding area that the development project is advancing on scientific grounds that are taking into account the archaeological and historical nature of the place.

The location is ideal for tourists seeking an integrated tour given that services that were not available in Egyptian museums before have now been provided, such as restaurants, cafes and bazaars, he added.

Add to this, Lafi said, the construction of a 250-meter (820-foot) tourist walkway by Ain el-Sira Lake with pergolas and seats, which will serve as an open area and a park for museum visitors.

He said Fustat contains antiquities dating back thousands of years and hosts the remains of four-story houses that ancient travelers called skyscrapers simply because they were not found in any other Islamic city.

Regarding the historical and archaeological importance of Fustat, Abdel Rahim Rihan, the general director of the Department of Research, Archaeological Studies and Academic Publication in South Sinai of the Ministry of Tourism and Antiquities, told Al-Monitor the city includes the Religious Complex, where the Jewish temple known as Ben Ezra Synagogue can be found, along with the churches of ancient Egypt such as the church of Saint Sergius and Bacchus (Abu Serga), which includes the cave where the Holy Family is believed to have stayed during one of its journeys to Egypt. This cave is 6 meters long and 4.5 meters wide and divided into three sections separated by stone columns. The cave sits 6.3 meters below the roof of the church, while the floor of the church itself sits 3.6 meters below street level, he continued.

Fustat is also home to the second oldest mosque in Egypt and Africa after the Sadat Quraish Mosque (in Sharqia governorate), namely the Amr ibn al-Aas Mosque, Rihan added.

The Abu Serga Church, being on the pathway of the Holy Family, encouraged the government to rehabilitate the streets leading to the Religious Complex and establish an alternative road for public transportation. The government also erected guide signs and pergolas and built tourist gates for the area bearing the icon of the Holy Family, at a distance of 800 meters to 1 kilometer from the site of the shrine, he added.

It also prompted the government to develop a comprehensive plan for the development of the area, Rihan said.

Fustat's National Museum of Egyptian Civilization is one of the most important and largest antiquities museums in the world. It is the first museum dedicated to the entirety of Egyptian civilization, with more than 50,000 artifacts recounting the stages of the development of civilization from ancient to modern times.

Add to this, he said, the crafts centers in Fustat, which are among the major projects established by the Ministry of Culture with the aim of reviving the glories of an ancient past while highlighting a bright present by allowing artists and craftspersons to unleash their creativity.

He stressed that the Fustat development project will turn the area into an integrated, urban site that combines old and new and establishes a link between present and past, all surrounded by wonderful gardens.

According to Rihan, this park is to compete with the newly designed Park Guell in Barcelona, which is registered as a World Heritage Site.

If Fustat is designed based on the special blueprint according to the directives of the political leadership, then Egypt would be offering a new destination to world tourists, he added.

He also suggested it be called the Gardens of Peace since it serves as a melting pot for religions and includes one of the most important stations blessed by the Holy Family, who resided there for a long time.

Rihan demanded a large theater be established in the center of the area to hold international heritage shows and festivals in the heart of the oldest Islamic capital in Egypt.