The Egyptian Ministry of Tourism and Antiquities has announced its intention to open the ancient Ben Ezra Synagogue in Cairo soon, after completing about 95% of restoration works, in a move aimed at revitalizing religious tourism. 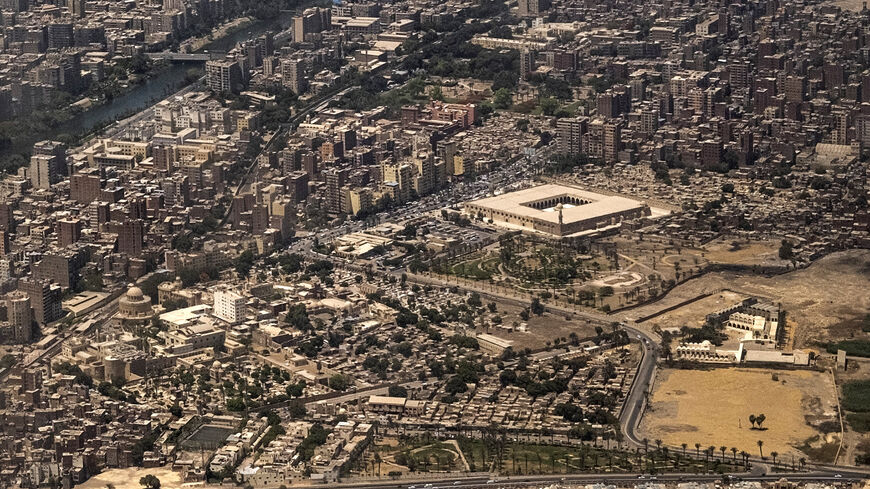 Aerial view of the historic old Cairo district, showing the Mosque of Amr ibn al-Aas and the complex of religious built atop the fortress that includes the Church of St George, the Coptic Orthodox Church of St Mary and Ben Ezra Jewish Synagogue, May 14, 2021. - Amir Makar/AFP via Getty Images

CAIRO — The Egyptian Ministry of Tourism and Antiquities announced Sept. 23 its plan to open the ancient Ben Ezra Synagogue in Cairo soon, after completing about 95% of restoration works.

The ministry began restoring the Ben Ezra Synagogue, located in the complex of religions in the Old Cairo district, in mid-April after it had been untouched for 30 years.

The Ben Ezra Synagogue is the oldest synagogue in Egypt and served in the past as a center for many celebrations, gatherings and prayers for Jews in Egypt. But today, the synagogue is no longer used for that purpose, rather it is only dedicated to archaeological visits.

The synagogue is believed to have been built on the remains of a Coptic Orthodox church that was sold to members of the Jewish community in Egypt in 882, and it was named after Abraham Ibn Ezra, a prominent Jewish religious scholar and philosopher.

Similar to other Jewish synagogues, the Ben Ezra Synagogue consists of two floors; the first floor is dedicated to men and the second to women. In the middle is the preaching platform where the Torah is read, and to the east is the Ark of the Covenant, which contains the Torah scrolls.

Today, it is believed that only six Jewish women remain in Egypt, with all men believed to have either died or left, out of more than 80,000 Jews who had lived in the North African country up until the late 1940s. By 1948, thousands of Jews had left Egypt for Israel, and more left during the 1956 and 1967 wars due to the difficult living conditions back then.

Secretary-General of the Supreme Council of Antiquities Mostafa Waziri was quoted in the Ministry of Tourism and Antiquities statement Sept. 23 as saying, “The Egyptian Ministry of Tourism and Antiquities pays great attention to this project and is keen to open the synagogue in the near future, shortly after the inauguration of the site of the Virgin Mary Tree [which took place Sept. 19], one of the stops on the Holy Family’s journey. [The opening of the site] confirms the ministry’s keenness to develop and restore all archaeological sites in their various historical eras — Islamic, Coptic or Jewish sites — as they are all Egyptian monuments that must be protected.”

Magdi Shaker, chief archaeologist at the Ministry of Tourism and Antiquities, told Al-Monitor, “The Ben Ezra Synagogue is located in the complex of religions, a historical area in Cairo. It is situated next to Amr ibn al-Aas Mosque, the first mosque founded in Egypt and Africa, as well as the Hanging Church, which is one of the first churches built in Egypt. This gives the area a historical weight because there are three important symbols of Judaism, Christianity and Islam.”

He said, “The Ben Ezra Synagogue is particularly important because that is where historical documents known as the Cairo Geniza are stored. The Geniza includes thousands of written documents that provide insight on the nature of the daily life of Jews in Egypt, whether financial transactions, purchase contracts, marriage or correspondence.”

According to the website of the Ministry of Tourism and Antiquities, the Cairo Geniza in the Ben Ezra Synagogue contains thousands of manuscripts accumulated over 850 years. The Geniza was discovered in 1888.

Ahmed Badran, professor of Egyptian archaeology and civilization at Cairo University, told Al-Monitor, “Restoring the Ben Ezra Synagogue and opening its doors to citizens and tourists is proof of the Egyptian government’s interest in all ancient sites without discrimination, whether they are ancient Egyptian, Greek, Roman, Christian or Jewish sites, all of which represent Egypt’s national identity.”

Shaker said, “The Jewish monuments in Egypt are very few; there are only a limited number of synagogues, such as the Eliyahu Hanavi Synagogue in Alexandria and the Shaar Hashamayim Synagogue in central Cairo.”

In early 2020, the Egyptian government reopened the Eliyahu Hanavi Synagogue in Alexandria, after it had been closed for several years due to restoration works.

Waziri said in the statement that the opening of Ben Ezra Synagogue will serve as a message to the world that Egypt is an incubator of Abrahamic religions, and it is a destination for people of all faiths who love religious tourism.