Egypt is using an international award it recently won for restoring the Eliyahu Hanavi Synagogue in Alexandria to promote tourism. 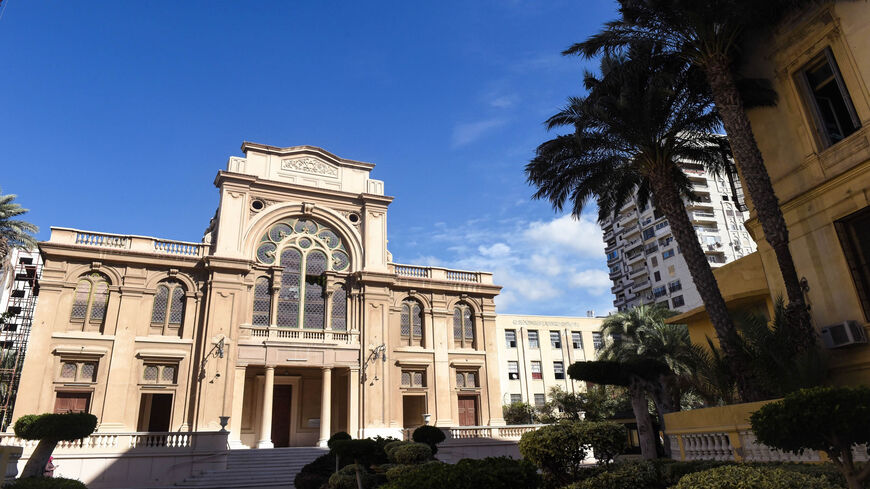 Egypt continues to reap the fruits of its projects to restore synagogues and Jewish monuments across the country.

According to a Facebook post published Oct. 1 by the Egyptian Ministry of Antiquities, the project to restore the Eliyahu Hanavi Synagogue in Alexandria won the award for the best international project in the category of restoration and rehabilitation projects, in the Engineering News-Record’s Global Best Projects Competition 2021, in which 21 countries participated in 18 different fields in the construction industry.

The winners were announced on the ENR website Sept. 27.

Egypt's Youm7 website published an article Sept. 30, saying that “the award is particularly important because ENR specializes in covering news and making professional analyzes on construction projects worldwide, which made it one of the most trusted magazines in the construction industry. ENR annually compiles a ranking of the largest contractors, engineering firms and major construction projects in the United States and around the world.”

It continued, “Egypt is the only country in the competition that won four awards out of 30 winning projects, and the most prominent Egyptian award was for the best international project in the category of restoration and rehabilitation projects for the project of restoring the Eliyahu Hanavi Synagogue in Alexandria.”

On Jan. 11, 2020, the Egyptian Ministry of Antiquities inaugurated the Eliyahu Hanavi Synagogue after three years of restoration works. During the ceremony, Secretary-General of the Supreme Council of Egyptian Antiquities Mustafa Waziri said, “Inaugurating the restored synagogue is a clear message to the world that the land of Egypt embraces all the different monotheistic religions.”

Egyptian Jews had celebrated the opening of the Eliyahu Hanavi Synagogue. The head of the Jewish Community in Egypt, Magda Haroun, told the press back then that she hoped “the synagogue would serve as a tourist attraction and contribute to changing the popular cultural opinion of the Egyptians about Jews, especially Egyptian Jews.”

One of the oldest members of the Jewish community in Egypt, Albert Arie — who has since died — had stated on Jan. 10, 2020, that the opening of the Jewish synagogue in Alexandria gives him pride, and it is such events that show the real Egypt.

“This temple in Alexandria had been part of the Egyptian heritage before it became a Jewish synagogue,” Arie said, noting, “I wish the synagogue would be a monument for all Egyptians, not only Jews.”

In February, Mohamed Metwally, general manager of the Islamic, Coptic and Jewish antiquities department in Alexandria, said, “The Ministry of Antiquities has succeeded in restoring the Eliyahu Hanavi Synagogue at a cost of 68 million Egyptian pounds [$4.3 million].”

He noted, “The temple is built as a basilica with 28 huge columns and is divided into five galleries. The structure of the temple is made out of marble, with a sacred wheel in the middle, on which inscriptions from the Ten Commandments of the Prophet Moses are written.”

Metwally continued, “During the restoration, the foundations of the walls and archaeological evidence of the ancient temple were discovered.”

The Eliyahu Hanavi Synagogue in Alexandria is one of the oldest Jewish temples in the Middle East and the largest in Egypt. It is built on a total area of 4,200 square meters (1 acre) and contains a library with books dating back to the 15th century.

It was first established in 1354 by the Jewish community in Egypt, and in 1800, Napoleon Bonaparte demolished the temple because the Jews of Alexandria refused to pay their share of taxes.

The Jewish community in Alexandria later completed the construction of the temple in 1850, but it suffered partial collapse over the years as a result of neglect, and so it was temporarily closed.

Egypt is aware of the importance of restoring Jewish monuments in stimulating tourism, which prompted Egyptian President Abdel Fattah al-Sisi in 2018 to allocate $71 million to restore Jewish archaeological sites in Egypt in addition to Islamic and Christian monuments.

There are currently over 25 synagogues in Egypt, distributed between Cairo, Alexandria and Beheira, but only 11 temples registered with the Ministry of Antiquities and the Ministry of Culture.

The Israeli Embassy in Cairo issued a statement in December 2018 praising “the Egyptian government’s initiative to restore various monuments, including Jewish ones, in order to preserve the ancient Egyptian history, because Egypt is the center of civilization.”

On Oct. 7, Egyptian Minister of Antiquities Khaled al-Anani said during a press conference at the Egyptian Embassy in Paris, “The Egyptian state is keen to preserve the unique Egyptian civilizational and cultural heritage for future generations, as it implements projects for the restoration and maintenance of monuments and the development of museums throughout the country. A number of restoration projects have been a success, most notably the project to restore the Eliyahu Hanavi Synagogue in Alexandria.”

Gamal Abdel Rahim, professor of Islamic, Christian and Jewish Archaeology at the Faculty of Archaeology at Cairo University, told Al-Monitor, “The award won by the restoration project of the Eliyahu Hanavi Synagogue is an international testament to the Egyptians' success in restoring monuments.”

He said, “The award will certainly contribute to reviving tourism, as the Ministry of Antiquities uses this award in its plan to promote and publicize it around the world to introduce Egypt’s most prominent antiquities.”

He pointed out that the Eliyahu Hanavi Synagogue is an architectural masterpiece that highlighted Egypt's keenness on restoring antiquities and respecting all monotheistic religions.